I heard the hogs before I saw them–not surprising as it was night–and snapped on the light mounted on the... 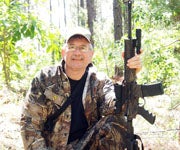 I heard the hogs before I saw them–not surprising as it was night–and snapped on the light mounted on the bottom rail of my Rock River Arms PRK-EHIDE, Rock River’s recent entry into the hog hunting market.

A version of its popular LAR-Hunter series, the PRK-EHIDE is a .223 caliber AR-style rifle. It’s very accurate (rated by Rock River to turn in 3/4-inch groups at 100 yards, which I was able to accomplish at the shooting range) and a lot of fun to shoot. It comes with a smooth two-stage trigger, half-quad rails on a free-floating handguard, and a16-inch chrome moly barrel with a 1×9 twist. For shooting comfort, there’s also an adjustable CAR stock and a Hogue rubber pistol grip. I topped it with a Bushnell 1X MP tactical optic, a red and green dot 1×32.

I was in East Texas this past April night hog hunting with the EHIDE, and the snuffling and grunting I heard that night was several smaller shoats and a big momma standing at about 80 yards. I lined up the Bushnell’s T-dot reticle on momma’s right shoulder and squeezed off two quick shots from the EHIDE. When we found her just inside the woodline the next morning, I guesstimated her at around 225 pounds.

The EHIDE’s camo pattern is created by digitized imagery of real hog hide, and it’s funky and unique. The pig hide camo is anodized to the lower and upper receivers, the charging handle, the oversized trigger guard, and the quad half-rail. I like the look, but some of my hunting pals weren’t big fans. Let me put it this way: no one at hunting camp is mistakenly going to grab your AR!

The Bushnell 1X is a nice little optic for AR applications, rugged and perfect for shooting in thick vegetation and lower light conditions. It lets you adjust the size and intensity of the red/green dot and the T-dot to your shooting conditions. The 1X is dry nitrogen filled, and is rated by Bushnell as 100 percent waterproof/fog-proof/shock-proof, and has built-in mount for Weaver-style rails. I found it a very good choice for shooting and hunting at 100 yards or less.

Bushnell also makes a 2X version of the optic, which will work better for hunting at longer ranges. I had a chance to use it recently, and in fact I replaced the 1X on the EHIDE with the 2X. Not only is the magnification doubled, but the 2X seems to have a sharper reticle than the 1X–at least on my sample–for better shot placement.