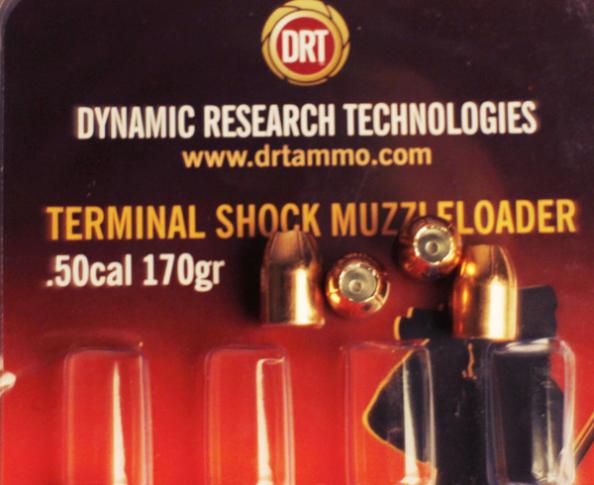 DRT – which formally stands for Dynamic Research Technologies and informally stands for “Dead Right There” – released a new muzzleloader bullet this fall that’s frangible, or designed to break apart during penetration instead of mushrooming. I had the opportunity to hunt with this new bullet on a writer’s event in Oklahoma earlier this month and saw the it action.

The concept behind all of DRT’s ammo (they make a variety of hunting and self-defense bullets) is that the bullet opens after a controlled degree of penetration. The muzzleloader bullet is supposed to open after 1 to 2 inches of penetration. The bullet has a standard copper jacket, but the core is made of a copper powder and proprietary material (instead of lead). When the bullet opens, this powder is designed to “sandblast” through the animal’s body cavity and destroy all of the internal organs in its way.

For the muzzleloader bullet, a small piece of the core and the jacket are made to hold together and pass through the animal. This is different than the rest of the DRT line, which isn’t designed for passthroughs.

Generally speaking, The folks at DRT are less concerned with passthroughs and exit wounds than they are with total energy transfer from bullet to animal and creating damage to an animal’s internal organs. The idea is that if a bullet (or the majority of a bullet’s mass) stays inside an animal, more energy is transferred from the bullet to that animal. In other words: knockdown power. The other side of this coin, obviously, is that without an exit wound, there is usually less of a blood trail to follow.

Performance in the Field
During my hunt in Oklahoma, we all shot Thompson/Center muzzleloaders, either the Triumph or Pro Hunter, and nobody had trouble turning in good groups at 100 yards. The DRT muzzleloader bullet killed more than half a dozen deer at ranges from 30 yards to about 150 yards. Some of the bullets passed through, some didn’t. All of the bullets killed their deer, but we saw a variety of results. One hunter made a text-book broadside shot on a buck and it literally dropped where it stood. Another hunter hit a buck in the neck, just in front of the shoulder and the deer went on a several-hundred-yard jaunt before the hunter could recover it.

It was pretty clear that with a good shot to the body cavity, this bullet is truly devastating and works as advertised. See the photo below. That’s the lungs (or what’s left of them) and the rib cage of a deer shot with the DRT bullet. But, I didn’t see enough evidence on how the bullet performed during mediocre and bad shots to deem it an end-all-be-all death machine.

Only time will tell, and I look forward to future field testing.

What’s your take? Do you prefer a passthrough or do you want maximum knockdown power? Comment below!