Shooting Slam: Back to Gunsite

I’m returning to Gunsite this week for the second Outdoor Life Shooting Slam. In case you missed the boat, this... 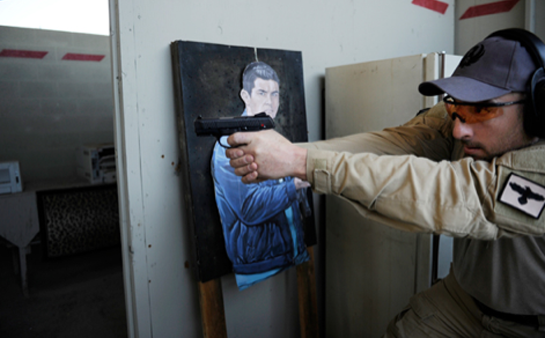 I’m returning to Gunsite this week for the second Outdoor Life Shooting Slam. In case you missed the boat, this event is a shooter’s dream. The winner takes home four new guns and gets all the ammo he can shoot during a week of custom training at Gunsite in Paulden, Arizona.

You can see what went down at last year’s event here.

This time around we’re taking a slightly different spin on the event. The contest winner, Josh Phillips, is an avid shooter from Alabama who has just recently started to hone his skills in action shooting. What we’ve got scheduled for Josh is a crash course in 3-gun shooting, which is going to take him from an eager novice competitor to a skilled beginner over the next four days.

The battery of guns Josh won is going to serve him well. He’s taking home two pistols from Ruger. An SR9 and an SR40. Both are polymer-framed, striker-fired designs that have done extremely well for Ruger. We’ll be doing most of the shooting with the 9mm but the .40 S&W is a very versatile pistol for self defense that’s good for some competition applications as well.

The shotgun we’ll be training on is the Mossberg 930 JM Pro 9. Mossberg built this shotgun in conjunction with shooting pro Jerry Miculek, who is one of the country’s most formidable and knowledgeable competitive shooters. This gun should be ready to roar right out of the box. We’ll give a full report on how it performs in the coming days.

The final firearm that Josh won is Rock River Arm’s LAR-15 ATH Carbine. The ATH stands for Advanced Tactical Hunter. It is a .223 that comes wit h an adjustable buttstock, a freefloat handguard with a full-length rail on top and half rails on the sides, and a heavy 18-inch barrel. A low-profile gas block gives the rifle a sleek look.

The rifle weighs a little over 7.5 pounds and is a durable rifle that should be able to stand up to the abuse it is going to get this coming week.

These guns are accurate, too. Rock River Arms says they’ll turn in 3/4 MOA groups at 100 yards, and based on my experience with numerous RRA rifles over the years I have no reason to expect our guns will have any trouble making that grade.