“Did I already say thank you?” I’m not sure how many times I’ve heard those words over this day, but... 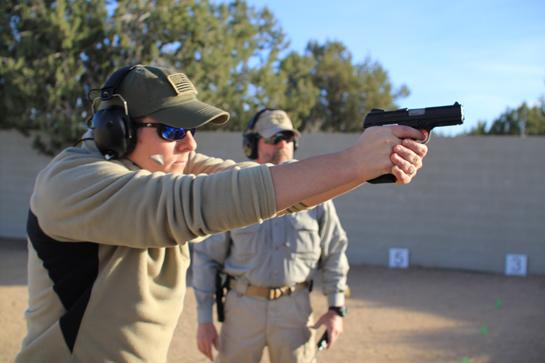 “Did I already say thank you?” I’m not sure how many times I’ve heard those words over this day, but I understand how Josh Phillips feels. Josh, who won this year’s shooting slam, has the wide-eyed look that kids get when they take that first trip to Disney Land, except this place, Gunsite, reveres the art of gun fighting and not a large-eared rodent.

If it goes “bang” Gunsite can teach you to shoot it better, but the heart and soul of this place is handgun shooting and that’s how we kicked off this event. Josh and I ran up the round counts on our Ruger SR9s today, polishing our skills and learning new ones, while making a case of 1,000 rounds of 9mm disappear.

I’ve been to Gunsite many times over the years but no matter how many times I’ve sent lead downrange at this academy, founded by the late, great Jeff Cooper, I’ve always left here a better shooter.

The only downside to this event is the time crunch. We are shooting three different guns–pistol, shotgun and carbine–over four days and with the amount of information that Mike Hughes, our instructor, needs to impart it’s a bit like drinking from a fire hose.

The 250 pistol class, which is the basic handgun class that Gunsite offers, takes up five full days of instruction. The same goes for Gunsite’s instruction with shotguns and carbines–all are multi-day classes. We don’t have that luxury and instead are trying to digest each platform in one short day leading up to our “graduation” on day four where we put it all together.

That said, Josh has turned in an impressive performance. A mostly self-taught shooter, he’s had a few “training scars,” as Mike puts it, to unlearn, particularly with his trigger control. But over the course of the day his groups got tighter, were placed better on the target and he shot faster.

Seeing his progress, and mine, drives home the point that we all owe it to ourselves to not only practice, but practice well under the watchful eye of a qualified instructor. Anyone who’s interested in becoming a better and more confident shooter needs to make the trip to Paulden, Arizona at some point.

Tomorrow morning we’re at it again, but this time we’ll be picking up our 12-gauge shotguns and learning some 3-gun tricks.