Every day at Gunsite is a good day, but I’d be lying if I said I don’t get particularly excited... 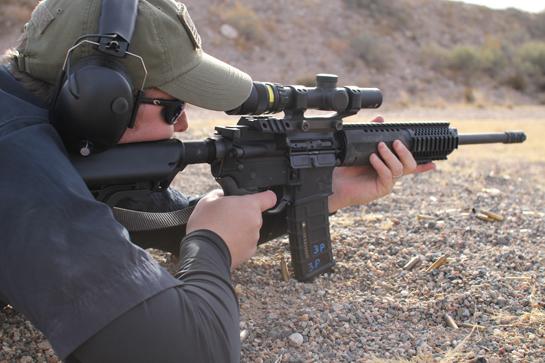 Every day at Gunsite is a good day, but I’d be lying if I said I don’t get particularly excited when we break out the carbines. They are the most versatile class of firearm we’re using here as our day on the range, at distances from 3 to 400 yards, demonstrated.

After our daily safety brief, we headed down to the range to zero the rifles. We are using the Rock River Arms LAR-15 ATH carbines in .223, and I brought along optics for both Josh and I. To match the versatility of the rifles, I selected variable power scopes with a minimum power of 1X. On Josh’s gun I put a Trijicon 1-4X24 AccuPoint and on mine a 1-6X24 Vortex HD Gen II. Having a good low level of magnification is critical for close-in shooting, while being able to turn the scopes to 4 or 6 power provides plenty of detail for longer shots. Another advantage is that both optics have illuminated aiming points–a fiber optic in the case of the Trijicon and an illuminated dot on the Vortex.

One of the distinct features on the carbines is that at ranges closer than 25 yards, the shooter needs to be conscious of offset, which is the gap between the sights and the barrel that gives the shooter a low point of impact when the rifle is zeroed at intermediate distances–in our case, meaning zeroed at 200 yards. This just isn’t a factor with either shotguns or handguns. When shooting at 3 to 15 yards it takes practice and conscious effort to aim high, especially when going for head shots. In 3-gun competition, where you’ll have stages that mix point-blank shooting with targets at 300 yards or more, this is especially important.

We progressed more quickly today, practicing complex drills that involved greater distances, where both wind and bullet drop became important considerations, as well as shooting on the move, which is a critical component in competition shooting and self defense.

Josh got his first taste of actual 3-gun shooting today with timed stages that required multiple hits on targets while moving from one position to another, shooting from barricades and other obstacles. As he found out, the dynamic nature of this shooting is unlike any static range drill.

But he rose to the challenge, maintaining his mental focus to harness the shooting and weapon manipulation skills he’s mastered over the last three days.

This is a good thing, because tomorrow is our “graduation” day, which means we’re taking off the training wheels. All our shooting tomorrow is going to be on the move, on the clock and conducted under increasing pressure. We’ll be running through some of the classic Gunsite simulators as well as taking Josh through some that are unique to the Shooting Slam. We’ll keep you posted.