If Josh Phillips had any pre-game jitters going into the fourth day of the Shooting Slam he did a good... 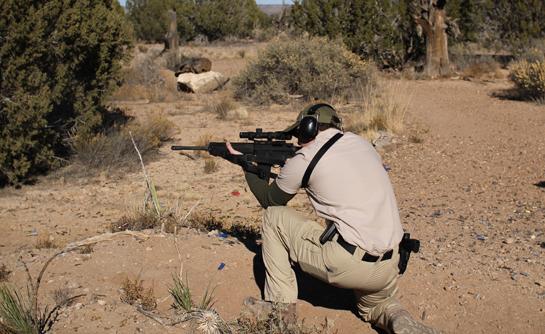 If Josh Phillips had any pre-game jitters going into the fourth day of the Shooting Slam he did a good job masking them. This final day of the event is graduation day, where we get tested on all we’ve covered by running through a series of complex shooting drills using all the guns we trained on during the week: the Ruger SR9 and SR40, Mossberg’s 930 Pro JM 9 and Rock River Arm’s ATH carbine.

“It’s simulation day,” Mike Hughes, our instructor, said as we arrived in our classroom at the Gunsite campus. We had a tight schedule to keep so after a quick safety brief we set off for our first simulator, the Wash.

Wash and Funhouse
The Wash is a shallow gully scoured out of the high-desert soil with hidden nooks, side channels and juniper bushes along it’s length–all ideal hiding spots for bad guys.

With our pistols loaded with frangible ammunition from Federal, we took turns walking the wash, scanning near to far for targets. The angles and footing were tricky and Mike had set up some of the poppers in devious positions but we knocked them down one by one.

From there we moved to Gunsite’s famous Funhouse, moving through the simulation again with pistols, taking out bad guys in the building while taking care not to shoot unarmed targets.

In addition to solid shooting skills, both pistol sims required tactical problem solving on the move. Which side to you approach a door from? Which way do you turn up a hallway? When do you reload?

The concepts are pretty simple: Keep as much space between you and potential threats as possible. After all, you’re armed and when you have a gun, space is your friend. Don’t reach across doors if you don’t have to–stick to the side that gives you the best concealment. Choose a line of motion that doesn’t get you stuck without means of backing out. And don’t stand in the open when there’s cover or concealment near by.

Scrambler
After lunch, we hit the Scrambler, a seven-position shooting drill that’s done against the clock. The rules are simple. You get two shots on each target, but each miss costs you five seconds. You sprint from one station to the next, trying to engage the targets as quickly as possible. Again, you have to strategize. Do you take the time to go into a kneeling position on some targets or try them off-hand? How fast can you push yourself and still guarantee hits? Any run under 60 seconds is considered good and under 50 is excellent. Josh and I both ran it twice with our carbines, improving our scores the second time around and I turned in a personal best run of 49 seconds with no misses on my second run.

“That was a lot of fun,” Josh said. “Any time you get to get your competitive juices flowing that’s good thing. It’s different with a timer going off than just having an an instructor telling you to go. That timer kicks you into gear.”

One key that Mike emphasized, which is good advice for any timed shooting drill, is to start to get your gun up as soon as you approach the target. Don’t wait to get into position and then raise the gun. Start getting your gun on target as soon as it becomes visible. This saves seconds and makes you shoot better.
**
Firebox**
Moving on, we hit the Firebox, another house clearing scenario done with shotguns. All the tactical considerations of the Fun House and the Wash came into play, but this time we had our Mossbergs in hand. All the targets are shot at close range with birdshot except one that’s placed at 35 yards and requires a slug. To chamber the slug quickly, you feed it into to magazine tube with your support hand and then reach under the gun with the same hand and rack the bolt, ejecting the shell that was in the chamber and loading the slug. If you can keep your wits about you under pressure, this lets you switch ammo with a shotgun quickly.

3-Gun Stage
All this shooting was in preparation for our “final,” which was a 3-gun stage Mike had built for us. We started with our pistols empty and on a table in front of us. At the buzzer, we had to load the pistol, put two shots on three different targets, reload and knock down two plates. From there we ran to a barrel where our shotguns awaited. We had 10 targets to knock down with bird shot and one slug target to engage. After that we sprinted backwards, getting our carbines from a rack and had to put shots on paper and steel while executing a reload and then reshooting the targets with the gun underneath a chair.

I could tell at this point Josh was hooked. “That was awesome,” he said. “There’s a lot to think about because you’re not just doing one thing. Am I going to shoot first and reload later or reload first and shoot later? It’s neat that you get to think outside the box. It requires strategic thinking. I like the mental game.”

Conclusion
With the shooting done, we got a chance to visit with Jeff Cooper’s wife, Janelle, who still lives at Gunsite in the home she and her husband built. The house contains a lot of Jeff’s memorabilia–works of art, trophy game heads, an extensive library, and Jeff’s gunroom, where he would hold court with his students and fellow gun enthusiasts. Janelle, an elegant and gracious host, gave us the grand tour and you could feel the colonel’s presence in every corner of the house. “That was such an honor,” Josh said, after we took our leave. “I never thought I’d get a chance to experience this.”

After spending four days with Josh, I have to say the Shooting Slam grand prize couldn’t have gone to a more worthy person.