On Feb. 2, the White House released a photo of President Obama skeet-shooting with a Browning shotgun last August at... 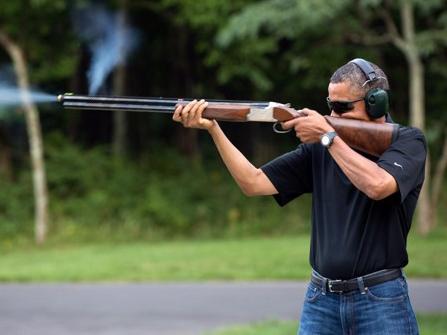 On Feb. 2, the White House released a photo of President Obama skeet-shooting with a Browning shotgun last August at Camp David.

The Associated Press, New York Times, New Yorker magazine, among many print and electronic media outlets, immediately spiraled into dithering spasms of shock, incorrectly informing readers that the photo shows the president firing a “rifle” instead of a shotgun “in an attempt to portray President Obama as a gun user.”

As Washington Times Senior Opinion Editor Emily Miller recounts in a Feb. 3 column, the New York Times was among the few publications that printed a correction, admitting it “misstated the type of weapon.”

But few others did, because in a mainstream media full of hand-wringing hall monitors, cheerleaders, fiddlers and fluff-mongers, virtually every issue is dumb-downed into emotional sound-bite screeds where facts are immaterial: A gun is a gun and guns are the enemy.

Mistaking a “rifle” for a shotgun is, in itself, a minor matter. But in the context of the broader national gun control discussion in the wake of the Newtown school massacre, the error — and the failure among many to correct it — underscores a daunting handicap America’s 90 million gun-owners are confronted with on a daily basis whenever they turn on the TV or open their newspaper: These people don’t know what they are talking about.

Even worse: Sometimes they don’t care.

The ignorance about “guns” transcends firearms to skewer intelligent, rational debate about regulatory and legislative limitations — and options — in the Constitution to “do something” about “gun violence.”

The media seem to “believe” and “feel” this is a Second Amendment issue when, in fact, the 10th and 14th Amendments will be (and have been) the primary points of legal contention since the 2008 Heller and 2010 McDonald Supreme Court decisions.

“It’s frustrating to realize that among all the voices chiming-in, there are a great number who have no idea why it is that we have the Second Amendment, or what all the fuss is about,” writes blogger Mark America on Jan. 6 on markamerica.com. “To them, it’s a simple matter: Collect up all the guns and the problem is solved. Sadly, simplistic views like this aren’t very likely to bear fruit, and there is good reason to be skeptical about those who express them.”

The danger with ignorance is it is easily manipulated.

“In his remarks before signing 23 executive actions on gun control, President Obama said, ‘We don’t benefit from ignorance,'” writes columnist Theodore L. Gatchel on Feb. 5 in The Providence Journal. “Ironically, the gun-control lobby he supports has not only benefited from the American public’s ignorance regarding firearms but has actively exploited it.”

Robert VerBruggen has written extensively about the mainstream media’s mishandling of “gun”-related issues in National Review Online. He offers “ways that journalists can avoid sounding stupid when they write about guns,” providing tips and advice on firearms, policies, and the Constitution for the objectively uninformed.

On Jan. 13, 2011, shortly after the Tucson shooting that critically injured Congresswoman Gabrielle Giffords, VerBruggen offered, “A guide for liberal columnists who don’t want to sound stupid about guns.” On July 23, three days after the Aurora movie theater shooting, he offered five more tips that every reporter, writer and editor in every newsroom should read and heed before covering gun-related issues.

Gun owners may never be able to overcome media bias and ignorance about “guns” and the Constitution, but they can remind journalists, editors, and TV personalities to have “respect for facts” by forwarding VerBruggen’s guides and advice to their news sources, be it the local weekly or a national TV news program. In doing so, try to curry a relationship with reporters by offering your expertise if they are uncertain or confused about a firearm, a policy or the Constitution to avoid “sounding stupid when they write about guns.”

— HOW OUR MEDIA MISLEAD ON GUNS

— A CASE STUDY IN MEDIA BIAS

— Ten Ignorant Lies About Guns in the US

— The Bias Against Guns: Why Almost Everything You’Ve Heard About Gun Control Is Wrong

— The Stunning Ignorance of Kossacks About Guns