Shotgun Shooting Tips: Seeing is the Key to Hitting

Being blessed with binocular vision is a wonderful thing. The subconscious coordination we’ve developed during evolution among our hands, brain,... 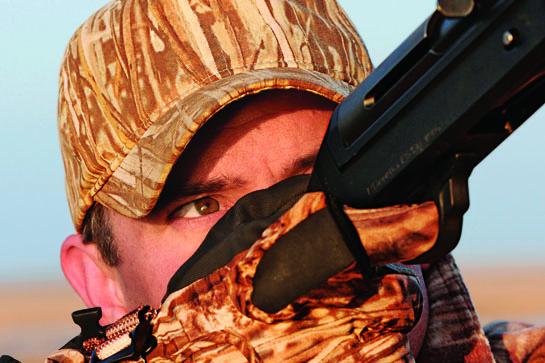 Being blessed with binocular vision is a wonderful thing. The subconscious coordination we’ve developed during evolution among our hands, brain, and eyes gives us all we need to smash true pairs in flight or bring down a bird flushing wild from cover. The only time we miss is when we put impediments between the target and our innate shotgunning ­ability–impediments that keep us from seeing the target as well as we might and prevent our brains and body from performing their task.

Tapping into this underlying reservoir of shotgunning talent isn’t difficult. The proper mindset, combined with some basic technique, will get you headed in the right direction.

Use Both Eyes
If seeing is the key to hitting–and it is–it only makes sense to use both eyes while shotgunning. For years, shooters who are cross-eye dominant–meaning that the eye that looks down the rib of the shotgun isn’t their dominant eye–have attempted to correct this supposed shortcoming by obscuring their vision. This is done by various means: closing the dominant eye while shooting, or placing a bit of Scotch Tape or a smear of lip balm on the dominant-side lens of their shooting glasses.

The only time this crutch is required is when the shooter is attempting to establish a conscious, rather than an instinctive, lead picture between the bead of the shotgun and the target. If the shooter is focused solely on the target and removes conscious calculation of lead from the equation, not only will that person shoot better, but he’ll also no longer need to handicap his shooting by using just one eye.

Clear Your Mind
But how do you move beyond this dependency on using a conscious sight picture? The trick is to not think about the shot while shooting. A pre-shot routine, in which you pick the spots where you want to position your eyes and start the barrel of your gun (which aren’t in the same place, by the way) and where you want break the target can help. Picking those three spots is all the thinking you want to do. After that, use a simple word or phrase–I often say “front edge” aloud to myself–before calling for the target. This will eliminate all extraneous thoughts–either negative ones like “Damn, this is a hard target,” or mind-cluttering ones like “Lead it by 3 feet”–that will inhibit your natural shotgunning ability.

Focus Hard
With a clear mindset prior to the shot, all the shooter needs to do is see the target. But there’s seeing and then there’s really seeing. The term “hard focus” is often used, and it’s as good a description as any for what you want to do (see “‘Hard Focus’ Illustrated,” right). If you’re passively focused on the sky around it, the target will take you by surprise when it appears and will look to be moving much faster than it actually is. Instead, keep your eyes focused on a spot a few feet in front of where the clay bird will first appear and then drill in laser-like on the leading edge of the bird as soon as your eyes detect movement (hence my “front edge” mantra before saying “pull”). This will cause the target to pop out of the sky and seem to slow down, giving you the opportunity to make a smooth, unhurried gun mount before breaking the target.
**
Start in Front**
While the majority of shotgunning is mental, a bit of technique can help as well. At one end of the target’s flight is the spot where you start to pick up the bird and establish a hard focus. At the other end is the place where you want to break the bird, the specifics of which are influenced by the particulars of how that target is thrown and whether there’s another target in the sky at the same time that you need to hit. In between these two points is the place you want to position the muzzle of your shotgun.

As a rule of thumb, start your muzzle about half to two-thirds of the way along the target’s flight path. Hold the muzzle just below the path of the bird, to avoid unnecessary up-and-down barrel movement when mounting. With this kind of head start, the idea of muzzle speed becomes moot. There’s no way for the target to outrace your gun, which can cover a huge swath of sky by swinging just a few inches side to side. The moment you see the target, start your swing while raising the gun to your cheek. Ideally, as the gun touches your cheek, you should touch off your shot. This way you’ll avoid “riding the bird,” which often contributes to missed shots. A compact, smooth move with your barrels is the final piece to slowing down the target, getting a hit, and gaining proficiency in the art of shotgunning.