Once upon a time men were made of sterner stuff. They hunted in wool, used iron sights and, by god,... 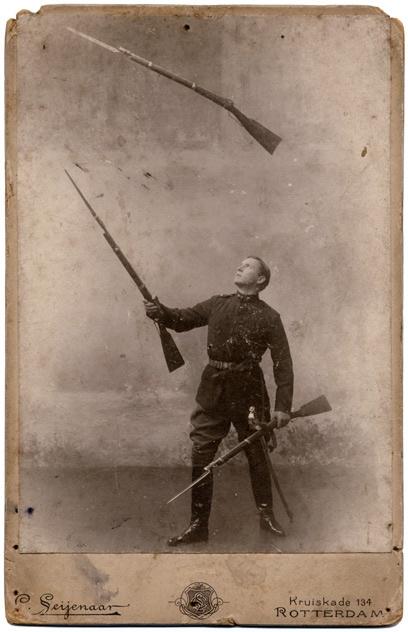 Once upon a time men were made of sterner stuff. They hunted in wool, used iron sights and, by god, they hit what they aimed at. Handwarmers? Rangerfinders? Optical magnification? A second shot? Please.

And, they had superior gun handling skills, as this photo plainly shows. This paragon of manhood not only keeps three rifles in the air, but does so with bayonets fixed and with a saber on his hip. Is he biting his lip anxiously or dripping with sweat while worrying about taking one of those blades through his rib cage? Hell no. He’s cool as the flip side of a pillow.

So the next time you’re struggling with your dry fire practice because you can’t keep your reticle from wobbling around like a soused bridesmaid at a wedding, think about this guy. Then take a deep breath, put on your big-boy pants and keep that reticle as still as a spider sitting in the middle of its web.