Shotgun Tips: How to Shoot From a Layout Blind

Tis the season for spending time on your rear ­end — ​­hunting out of a layout blind, that is. These... 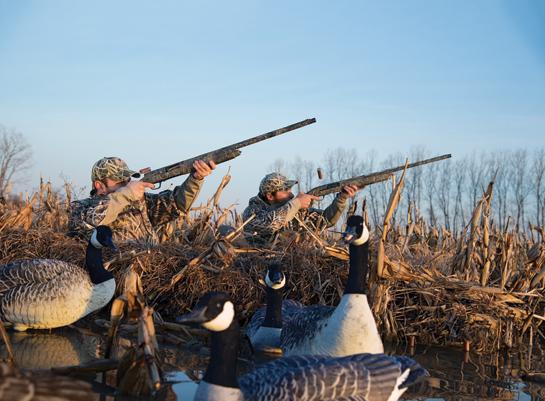 Tis the season for spending time on your rear ­end — ​­hunting out of a layout blind, that is. These hides offer the ultimate in comfort and concealment for hunting open crop fields, where traditional blinds can’t be used. Across the grain belt in particular, where field hunting is most common, layout blinds are tremendously popular.

Shooting well from a layout blind can be tricky. Range of motion is somewhat limited by the near-­horizontal sitting position, and safety must be taken seriously as hunters rise simultaneously from their hides.

Pacific Northwest waterfowl guide, goose-calling expert, and layout hunter Bill Saunders offers these tips for better–and safer–shooting from a layout blind.
**
1) Practice From Your Blind**
Outside of hunting season, how often do you shoot from a seated position? That’s what I thought. If you want to shoot better this season, get in some practice by shooting clay targets while parked on your keister.

2) Position Blinds Carefully
Shooting while seated limits your range of motion. For right-handed shooters, it’s more difficult to rotate to the right, and the opposite is true for lefties. Try to position the blinds in a way that maximizes the number of shots taken on the side where your shotgun is pointing naturally.

How to do this varies depending on whether you are positioned outside the decoy spread or in it, but here’s a good example: When you are positioned about 20 yards off the edge of the spread and expect the birds to land straight ahead, rotate the blind so that the foot end is slightly to the right (for righties) of the area where you expect birds to land. This makes it easier to shoot slightly to the right, if needed.

3) Dig In
If you’re an XXL hunter, you might find it difficult to bring yourself fully upright when it’s time to shoot. Saunders says a simple fix is to dig a hole 4 to 6 inches deep where your derriere will be when positioned in the blind. This puts you in a more upright position from the start. He’s done this with several plus-size former NFL players who have hunted with him.
**
4) Cock Your Leg**
Increase your range of motion by pulling up the leg on your shooting-hand side so that the foot is roughly under the backside of your opposite knee. This also creates a more stable shooting base.

5) Be Patient But Flexible
The best way to increase your odds of making the shot from a layout blind is to let the birds get as close as possible when they are working your spread. But also be willing to move when conditions change and the birds are no longer coming. These tips will not only make you a better shot, but a better hunter, too.

1) Shoot Forward
This rule should apply anytime other hunters are directly to your left and right, no matter what kind of blind you’re using. However, it’s especially important when the doors of a layout blind swing open and the action is hot. Do not shoot over your partners’ heads. Keep all barrels pointed forward. And don’t walk out in front of the other hunters unless all guns are unloaded with actions open. If the wind changes and birds are consistently landing where shots are in unsafe directions, change your setup.

2) Keep Safeties On
Saunders has encountered a lot of hunters over the years who had the bad habit of flipping off their safeties while the birds were working the decoys. This is especially dangerous because the possibility of a negligent discharge tends to be higher when hunters are moving in a confined space and wearing bulky clothing, such as when they’re in a layout blind. Now he institutes a rule requiring that safeties remain in the safe position until the hunters are sitting up and the guns are shouldered.

3) Use the Gun Rest
A quality layout blind should come with a built-in gun rest designed to keep the shotgun pointed in a safe direction. Use it. Don’t lay the gun across your lap, where it might be pointed toward your fellow hunters.

4) Keep Dogs Out
If you hunt with a canine companion, he deserves his own blind. A dog in the layout blind with you and a loaded gun is asking for trouble. Don’t do it.