In a move to catch up with the next generation of shooters, Big Green has taken on technology from TrackingPoint... 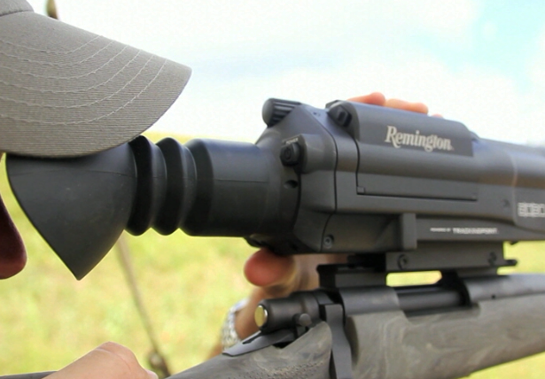 In a move to catch up with the next generation of shooters, Big Green has taken on technology from TrackingPoint to develop the Remington 2020 Digital Optic system. The heart of the system is a digital scope that inputs values in distance, temperature, elevation, inclination, and other environmental factors to calculate the proper hold (the shooter must enter a wind value).

The system is essentially the same as the TrackingPoint precision guided rifle that Shooting Editor John B. Snow reviewed except for two major points: 1) the system does not have the precision guided trigger which can be used to release the shot when the shooter is on target; 2) it’s significantly less expensive. The entire Remington system, including a rifle, case, and 300 rounds of ammunition, has an MSRP that starts at $5,449. I’ll leave field testing and the ethical discussion about applications for this technology for a later date. For right now, here’s a quick look at what the Remington 2020 does.

**
How it works**
The shooter must first enter his selection of three preset loads into the system. The Remington 2020 is being outfitted on three different guns, including the Model 700 Long Range in .30-06 Springfield, the 700 SPS in .308, and the Bushmaster Varminter in .223. Once in the field, the shooter enters a wind value with a rocker button on top of the scope. Next he tags the target by depressing a separate button on top of the scope. The tag remains visible on screen as a red dot. Remingtion says that once this tag is placed, the system is supposed to be able to identify its location even if the target is moving (up to 10 miles per hour). By continually monitoring environmental factors the scope automatically adjusts the crosshairs (hold) for the shooter. The system monitors environmental factors at a rate of 54 times per second.

All the shooter has to do is move the crosshairs on to the tag on the target, known as the “kill zone” and fire when the reticle changes from blue to red. The size of the kill zone can be adjusted from 4 MOA to 1 MOA (in increments of .5 MOA). The main difference from the TrackingPoint system is that with the Remington 2020 the shot breaks as soon as the trigger is depressed. A flinch by the shooter could lead to a miss. The TrackingPoint system works to eliminate these errors by releasing the shot when it senses the conditions are perfect.

Like the TrackingPoint system, the Remington 2020 feeds to an iPad, iPhone, or Android so a spotter can watch the action. The system also records video of the shot (up to two hours of onboard memory) that can be streamed realtime, emailed, or shared on social media.

Essentially, the system eliminates the need to calculate holdover on longer shots. Remington is clearly marketing this system for hunting, which may be the reason for the 500-yard limit for the tagging feature. The company is hoping to capitalize on the widespread interest in long-range shooting and hopefully their efforts will result in fewer wounded animals. Remington plans to initially make about 1,000 of these systems to gauge consumer feedback. You will see them start to pop up at sporting goods stores like Cabela’s, Bass Pro Shops, and Gander Mountain this fall.