The story of Mikhail Kalashnikov is of a life shrouded in mystery, myth and potent symbolism, all of which applies... 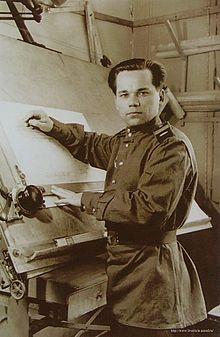 The story of Mikhail Kalashnikov is of a life shrouded in mystery, myth and potent symbolism, all of which applies as well to his signature achievement: the AK-47.

That rifle which bears his name, the “Avtomat Kalashnikov,” will be forever linked to the man credited with designing it in the years following World War II. The official story from the Soviet Union was that Kalashnikov designed the weapon on his own while recovering from injuries sustained as a tanker while fighting the Nazis.

As such, he was held up as a hero of the people, and represented the Soviet ideal of a simple man who worked for the benefit of all, giving the Soviets a powerful tool to fight off the capitalists and other would-be suppressors that were angling to diminish or destroy the Soviet Union.

The truth was more nuanced than that. In all likelihood, Kalashnikov, who died earlier this week at the age of 94 in a hospital in Izhevsk, the capital of the Udmurtia republic where he lived, was part of a team of designers who created the AK-47. The full tale of what he did (or didn’t) do has resisted a complete telling, in part because of the secrecy that still permeates the Russian state and in part because of the inconsistent accounts Kalashnikov himself gave over the years.

But the AK-47 itself is a cold, hard fact. Its simple and rugged design has proven itself in combat and various hell holes around the globe since the late 1940s and will, no doubt, continue to see service for many years to come.

The beauty of the rifle, the first assault rifle to be widely adopted, is that it put a tremendous amount of firepower into an individual soldier’s hand and did so in a package that was portable, easy to shoot and reliable.

As a political symbol, the AK-47 is in a class by itself. It is the dominant image of revolution around the globe and its silhouette has been used by countless militants, soldiers, politicians and terrorists to further their ends. It is the only firearm to appear on a nation’s flag. (Thank you, Mozambique.) For a more complete look at the history of the AK-47, take a look at “The Gun” by C.J. Chivers, which is essential reading for anyone interested in the background of this rifle.

In civilian semi-auto configurations it is a blast to shoot. It is an ultimate plinker’s platform, good for spitting lead downrange and they make for a fun project should you attempt to build one yourself. (Do this, and you’ll quickly find that the images of illiterate goat herders building them up from scratch in the Khyber Pass is a bit of a stretch. It takes more than just a flat file and a hammer to make an AK that runs well.)

I currently have three AK-74s in the works. Two with traditional wood furniture and one with a more modern polymer stock and handguard. (The AK-74 model is a cousin to the AK-47 and runs the 5.56x39mm cartridge vs. the 7.62x39mm round in the AK-47.) AKs to me are like potato chips: you can’t just have one.

And that’s part of the appeal to the AK shooters out there. There are so many variants of the AK-47 that learning the taxonomy of the rifle is pleasurable study in itself.

But most AK devotees became that way after shooting the rifle. The triggers are terrible, the sight radius is small. The rifle clacks and rattles every time it cycles. It takes time to learn how to execute quick magazine changes. But what dawns on everyone at some point is that this really is an everyman’s rifle. Anyone can be trained to run and maintain one. No tinge of the elite clings to the AK.

As such, the vision of Mikhail Kalashnikov, and whoever else helped him create it, has established a lasting hold on the world’s imagination that is unlikely to fade. And as long as there are shooters out there who appreciate simple, effective tools, the AK-47 will have a cadre of passionate fans.