Last week, the Outdoor Life and Field & Stream editors waded through the mass of new guns and gear at... 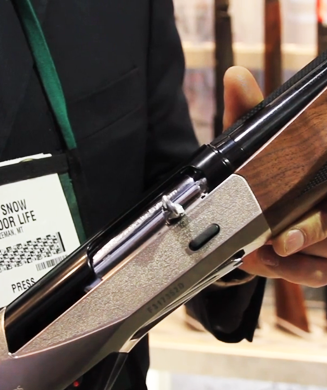 Last week, the Outdoor Life and Field & Stream editors waded through the mass of new guns and gear at the 2014 SHOT Show in Las Vegas. In this post, we’ve highlighted the 11 most interesting new shotguns, rifles, and handguns of the year. From sleek upland bird shotguns, to long-range bolt-action rifles, to competition ARs, the show had a little bit of everything for every kind of shooter or hunter.

Check out the sneak peek (you can’t fully review a gun from a showroom floor) and then make sure to check out the June/July issue for our annual Gun Test where we put the screws to the best new firearms on the market.

The Ethos is Benelli’s inertia-driven semiautomatic shotgun introduction for 2014. It’s a lightweight upland bird gun that features a new shock absorption system in the stock and a comfortable cheek pad. The gun is available with a nickel-plated receiver or an anodized receiver.

To the disappointment of Ruger fans, the Red Label was dropped from the market due to high production costs a few years ago. Now the company is bringing back a new, improved version of the gun at a reduced price. The shotgun now retails for about $1,400 and actually has better internal mechanics. Ruger has cut costs by redesigning the the receiver and instituting a more efficient manufacturing method. We expect the Red Label to make a successful comeback.

When DPMS was founded, one of their core principals was getting ARs into the hands of more hunters. While the original AR design wasn’t ideal for most hunting scenarios, the DPMS G2 is certainly another step in the right direction. Chambered in .308, this gun is light and should handle extremely well. The gun features a carbon fiber handguard, a plunger ejector on the bolt, and will retail for about $1,699.

The Ruger American rifle stormed into the market last year as an accurate, durable rifle for a bargain price. For 2014, Ruger is introducing a rimfire .22 version with a variety of features that include a rotary magazine, a fiber optic front site, a good trigger, and interchangeable butts. The gun comes in a standard version (shown in the video) and a compact version.

The best feature on this gun might be the price: $250.

Colt is working hard to build the average shooter a good 3-gun rifle and their new AR is another step toward satisfying that audience. The rifle has the eloquent name of LE6940AE-3G. Its more desirable attributes include a fully ambidextrous lower, an extended handguard with plenty of rail options, and fold-down Magpul sites. It will retail for about $1,900 and should be available mid-year of 2014.

Last year, Beretta rolled out the 20-gauge A400 Action and this year they’re going even smaller. This is the first 28 gauge semiautomatic shotgun that Beretta has ever made. It has all the features that Beretta fans have come to expect from an A400 but scaled down in a sub gauge.

We haven’t got the specs for this gun yet but it weighs only about 5 pounds. The 20-gauge version of the gun retails for about $1,500.

As the long-range frenzy continues, we should not forget that Weatherby has been specializing in rifles for extreme distances ever since the company was founded, and I mean hunting rifles, not tactical guns. Newest in their lineup is the Terramark RC, a Mark V with a special earth-tone camo stock and dirt-colored (sort of) metal finish on the receiver and fluted barrel.

“RC” stands for Range Certified, and attests to the fact that each of these rifles was fired at an indoor 100-yard range and produced sub-MoA groups with Weatherby ammo. You get the actual target, signed by Ed Weatherby. The rifle comes in .30/378, which is something of a revelation to shoot, because its bullets don’t seem to drop. The stainless barrel is 26 inches, with a muzzle brake, which you need, and is deeply fluted to save significant weight and promote cooling, which is nice when you’re burning as much powder as this round does. A great many factory barrels are fluted for cosmetic reasons, but this one is the real thing.

Two things to bear in mind about the Terramark RC: Like the rest of the Accu-Mark series, this one is put together to custom-rifle standards. Fit and finish are immaculate. Second, if you want to hunt with a rifle that will deliver the goods way out past 300 yards, you don’t have to carry some ungainly tactical rifle that can best be hauled by a team of mules. This is a practical sized rifle of manageable weight that is accurate enough for any big game and packs more than enough wallop to put it on the ground. The price is $3,000.

Everything about Barrett’s new semiautomatic .50 caliber rifle is big. The rifle is fitted with the QDL suppressor (Quick Detach Large suppressor) and a stocky bipod. The price tag is big too. The gun retails $18,000.

Even the short-action version of the rifle is a beast. It has a total length of 45.4 inches and weighs 14 pounds. It will retail for about $3,400.