Photos by: Rab Cummings The Colt M2012 is a gentleman’s tactical rifle. You probably didn’t realize that was an official... 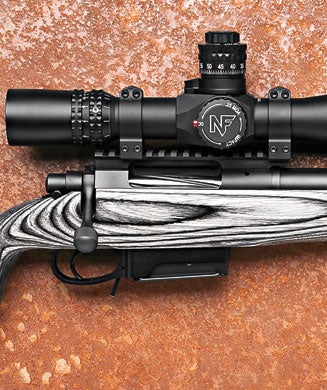 The Colt M2012 is a gentleman’s tactical rifle. You probably didn’t realize that was an official class of firearm. Well, neither did I until I shot the Colt and made it up. The term fits, though.

The rifle straddles the hunting and tactical worlds, which in itself isn’t unique, but it happens to do so with unusually elegant looks. The M2012 is made for Colt by Cooper Firearms in Stevensville, Mont., and it bears the unmistakable mark of Cooper’s craftsmen.

The fit and finish on the rifle are superb. Every Cooper rifle I’ve ever handled has had outstanding metalwork, and that is the case with this rifle too. The contours, lines, and edges are crisp without being sharp, and the various metal pieces are joined with expert precision. The blued finish on the metal is smooth and blemish-free and both protects the firearm and gives it a luxurious sheen.

Sweet Lines
The stock is pretty, too. It is a gray laminate, and it has a pistol grip and palm swell for right-handed shooters. The flat comb is classic American style, and its proportions–I’m thinking here about the thickness of the stock in particular and the way it gradually swells to encompass the action–are perfect from front to back. Its lines are simple and clean. But is it too pretty?

The stock is where I started to have some issues with the rifle. Combs on tactical rifles often adjust for height, or when they don’t are typically elevated. This isn’t very attractive, but it is necessary to correctly align the shooter’s eye with the scope because of how high the optics are positioned. (This is due to the size of the objective lens and scope bodies on high-mag scopes.) The M2012 has no such adjustment, and in order to sight through the Nightforce BEAST 5-25×56 (shown above), I had to compromise my cheek weld.

The lack of any type of checkering is also a concern. Under favorable conditions at the range this is not an issue, but in cold and wet weather I’d want the rifle to offer a more secure handhold. The stock is smooth and lovely, yes, but it’s not built for rough use.

Well Balanced
The barrel and action have a few tactical touches. My rifle was chambered in .260 Rem., which is popular with both long-range target shooters and open-country hunters, the two markets Colt is looking to sell to. The muzzle has an aggressive and effective brake that, along with the rifle’s 8-pound 11-ounce weight, minimizes recoil. The action is fed by a tactical-style detachable five-round magazine from Accurate-Mag, and the bolt is beefed up, which helps the shooter open and cock the M2012’s three-lug action, which, like other large-caliber Cooper actions, is quite stiff.

When it’s shot prone and off the bench, the rifle runs well, recoiling straight back into the shoulder while preserving the sight picture. The stiff action inhibits fast shooting, unless the shooter leans hard into the rifle with the bipod braced against an unyielding surface. But for slower strings of fire, it is fine. Shot from sitting and kneeling positions, the rifle is balanced and stable, making for good first-shot accuracy. But again, the action makes the rifle hard to cycle from the shoulder for speedy follow-up shots.

The two-position safety and oversize magazine release are easily manipulated and give positive feedback to the shooter. The trigger is set at 3.5 pounds, which is a bit heavy for precision shooting, but it broke crisply with negligible take-up and overtravel.

The rifle’s accuracy was mixed. It printed one amazing group with Nosler 120-grain Ballistic Tip bullets that put four shots in a dime-size cluster along with one “flyer” that stretched the group to .672 inches. However, the average group size (all with factory ammo) was a good, but not outstanding, 1.266 inches. For $2,795, most shooters would probably expect better.

The question is, will this sleek and expensive rifle find enough takers looking for a tactical-target-hunting hybrid?

Verdict: Beautifully built and finished, but how many shooters will be willing to pay the price?