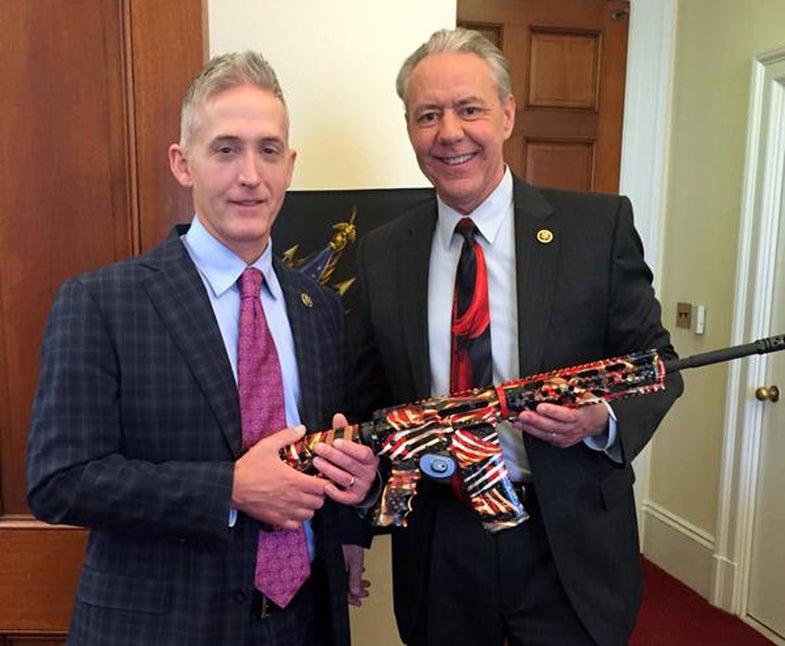 NBC Connecticut reported on April 23 that the families of 11 Sandy Hook victims say they are not in any way affiliated with Sandy Hook Promise, the gun control group for whom Tim McGraw will headline a concert fundraiser because he is “leading with his heart, not his head.”

The families issued a statement to clarify that they are not associated with Sandy Hook Promise, which, they said, “is at times wrongly assumed to speak for all 26 victims’ families.”

The families said their decision to issue the statement “isn’t related to a position on the gun debate or other issues surrounding the tragedy,” rather they simply wanted to clarify that they are not affiliated with the group behind the McGraw concert.

Norfolk Daily News quoted the 11 families saying: “We wish only to provide clarification for the many generous donors that believe they are directly supporting the families at the center of this tragedy by contributing to the Sandy Hook Promise” organization.

So, what is Sandy Hook Promise?

“A gun control group which currently supports gun confiscation bill SB 941 in Oregon, which opposed arming teachers for self-defense in Georgia in 2014, and which has maintained ongoing support for expanded background checks at the federal and state level,” writes AWR Hawkins on April 22 on Briebart.com.

Rolling Stone: Tim McGraw a “Champion of the Second Amendment”

Ohioans for Concealed Carry on April 21 filed a lawsuit in Cuyahoga County Common Pleas Court requesting an injunction against the city of Cleveland from enforcing new municipal gun laws its City Council adopted the day before.

The suit argues that Cleveland’s new municipal firearms regulations are prohibited under state statute. According to OCC, some provisions in the new laws reflect state law, including prohibitions against using a gun while under the influence of drugs or alcohol, defacing a gun’s serial number or allowing a minor to use a gun without supervision.

However, OCC says, other components of the laws are unique to Cleveland, including a requirement that gun offenders register with the city’s safety department within five days of either being released from prison or moving to Cleveland. The law also requires an owner to report a lost or stolen gun to police. Anyone who sells or transfers a gun, but is not a licensed gun dealer, must report those transactions.

In its complaint, OCC maintains that state law prohibits local municipalities from crafting their own laws to regulate the right to possess, purchase, sell, transfer, transport, store or keep firearms. The Ohio Supreme Court already has told the city that the state statute nullifies the city’s gun restrictions, according to the suit.

In a written statement released April 22, Cleveland Mayor Frank Jackson said the new city laws do not violate the rights of lawful gun owners, but rather, will promote responsible gun ownership.

“The city’s new laws mirror current state misdemeanor firearms offenses and address concerns with the responsible use of firearms in an effort to reduce gun violence, protect the city’s youth, and make Cleveland’s neighborhoods safer,” Jackson wrote. “These new laws do not limit the rights of our citizens to own firearms. This is an appropriate step to ensure that second amendment rights are protected while ensuring that weapons are not misused.”

Cleveland’s new gun control law: Thumbs up, or thumbs down? You be the judge

The number of active Class A concealed carry licenses issued in Massachusetts grew nearly 12 percent between 2013 and 2014, a significantly greater jump than in past years, a Boston Globe review of data from the state’s Firearms Records Bureau found.

The growth in concealed carry permits accompanies new legislation passed in August 2014, which expanded the state’s 1998 gun laws, considered among the toughest in the country. Among provisions included in August 2014 legislation was tightening requirements for applicants seeking a state Firearm Identification Card to match those of the Class A license. The Firearm Identification Card lets holders possess and transport a rifle or shotgun.

The new law includes “a provision that allows police chiefs to petition the courts to deny a Firearm Identification Card to an applicant not judged suitable,” writes Matt Vespa on Townhall.com.

The new law did not change the basic requirements to get a Class A license. Applicants must still pass a background check and get approval from their community’s licensor, often the chief of police. New applicants must also provide proof of firearm safety training. Even then, firearm licenses need to be renewed every six years.

With about 318,000 licensees in 2014, the Class A license was the most popular in the state; only about 34,000 residents held Firearm Identification Cards, Vespa writes.

“This is deep blue Massachusetts; it could have been worse,” Vespa writes. “The Bay State already has some of the most stringent gun laws on the books, as do most states in the liberal Northeast and New England. Yet, these new laws –- some of which aren’t necessarily terrible; the NRA’s armed officer in schools initiative was approved – didn’t stop Massachusetts residents from lining up to apply for their concealed carry permits, which saw a significant increase since Gov. Patrick signed the new pro-gun control measures into law.” 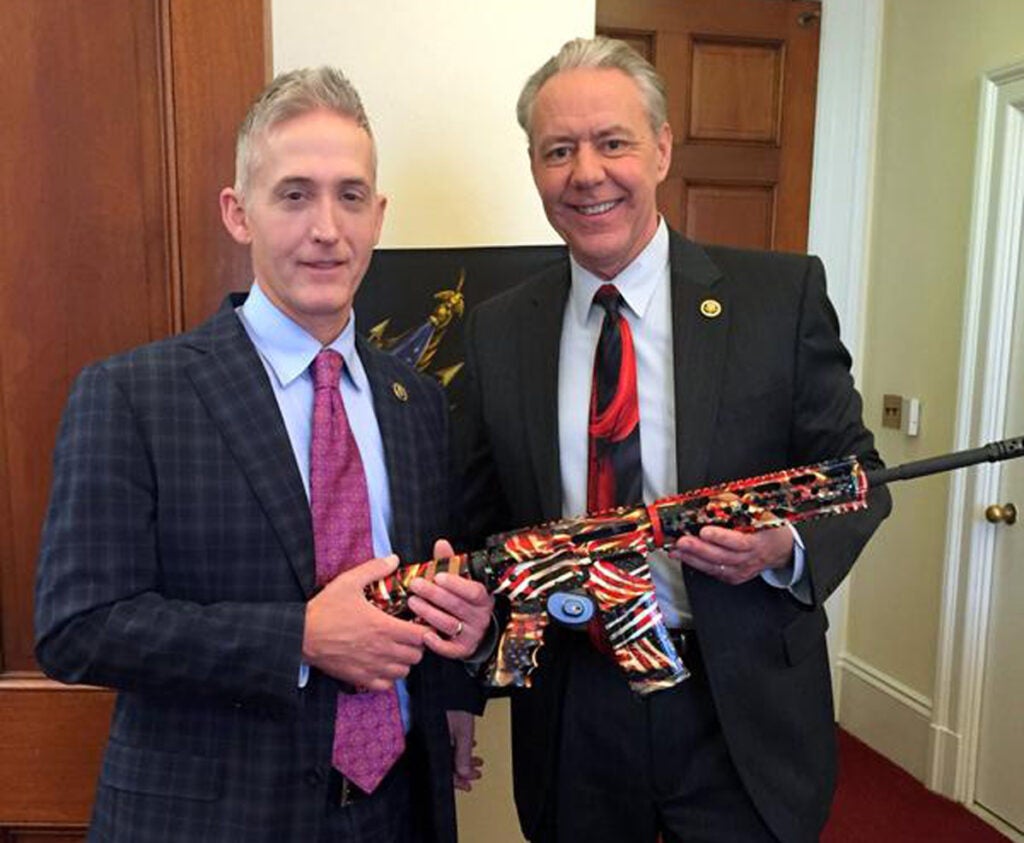 Rep. Ken Buck of Colorado is drawing criticism from featherheads and flibbertigibbets after he tweeted a photo in mid-April of him and South Carolina Rep. Trey Gowdy holding an AR-15 rifle in his Capitol Hill office in Washington DC—where such semi-automatics are classified as “assault weapons” and are, therefore, banned.

Members of Congress are allowed to bring guns into their Capitol Hill offices, but it’s uncertain if Buck broke the law when he transported the banned rifle through D.C. Buck says he checked into local laws before bringing the AR-15 to Washington to hang in his office. He says the rifle was unloaded, secured with a trigger lock and the gun’s bolt carrier assembly was removed in Colorado before he brought it to D.C.

“I went to Capitol Hill police; I got permission to bring it into my office. They went to the D.C. police; they got permission for me to transport it into the District. I went to TSA, and followed all of the regulations in getting it onto the plane and getting it here,” Buck told the Washington Post on April 21.

The photo spurred a flurry of shrieks from the anti-gun cabal about Republican congressmen flaunting local laws, but as Jeremy Diamond writes on CNN.com, a basic understanding of the 1968 Firearms Owners’ Protection Act (which allows gun owners to transport guns across state lines from one place to another as long as it is securely carried) would have saved them from, once again, being exposed as knee-jerk ninnies who, quite literally, do not know what they are talking about.

Did a congressman break gun laws by bringing AR-15 rifle on the Hill?

Members of Congress can keep firearms in their offices, Capitol Police say

Capitol Police: Members of Congress can keep guns in their offices

Ken Buck investigated for having an AR-15 in his DC office Update: Dismissed