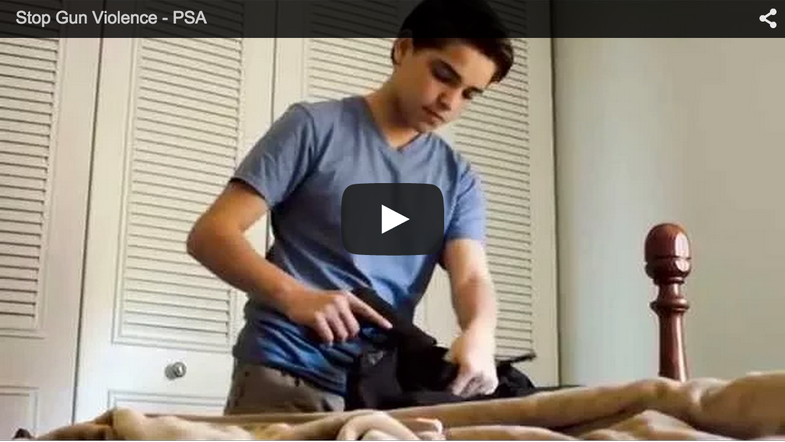 Gun control cultist and Indian filmmaker Rejina Sincic has created what she calls a “public service announcement” for PBS with your tax money calling on children to find and steal their parents’ weapons from their houses, bring them to school and turn them in to their teachers.

Suncic’s “PSA” video shows a boy sneaking into his mom’s room and taking a pistol out of her dresser drawer, placing it into his backpack, and bringing it to school. He waits until class is over and promptly puts it on the teacher’s desk, asking, “Can you take this away? I don’t feel safe with a gun in my house.”

The irresponsible video prompted immediate criticism from intelligent, responsible adults, regardless of gun-control views. “Remember when Vice President Joe Biden stupidly told people to fend off intruders by firing a shotgun into the air? This is worse,” posts Aleister on legalinsurrection.com. “”I’m not a lawyer or a gun owner but as I watched this for the first time, I couldn’t help but wonder how many laws the boy in the video was breaking.”

Stealing parents firearms from storage “would result in the boy facing numerous felony charges (exact charges depend on state laws) possibly including weapons theft, unlawful possession of a weapon by a minor, illegal concealed carry of a weapon, carrying a weapon onto school property, assault, and brandishing,” writes Bearing Arms. “You really have to marvel at the ignorance on display in the ad.”

Charles C.W. Cooke of National Review offers more analysis: “One can only imagine that the spot’s producers consider their set up to be inordinately clever. ‘Hey,’ you can almost hear them say, ‘we’ll make it look as if there’s going to be a school shooting, and then he’ll hand it over to his teacher and all will be well!’ In fact, it is difficult to imagine a more irresponsible storyline.”

Usually, Cooke writes, gun control PSAs focus on specific safety issues, such as a lack of trigger locks, or background checks, or safe-storage. “This one seems to feature a child who is saying, ‘I don’t want any guns in the house at all,'” he writes. “This absolute approach is extreme, even for today’s class of wildly incompetent control freaks.”

The video was recently pulled from YouTube, following the storm of criticism.

Watch the worst gun control PSA ever made

Gun control ninnies are in a tizzy of knee-jerk angst, beside themselves in despair that Machine Gun America’s Dec. 20 grand opening was a resounding success.

Machine Gun America, which describes itself as an ” Automatic Adrenaline Attraction” that “offers guests an exciting way to experience firearms in a safe, secure, state-of-the-art environment designed to give anyone, regardless of their experience level, the thrill of a lifetime.”

Children as young as 13 years old can fire real bullets from machine guns at fantasy targets like zombies and Osama bin Laden, which has upset gun control prohibitionists to no end, since it is advertising the firing of AK-47s in a theme park atmosphere minutes away from Disneyland.

It also aggravates the forces of firearms ignorance that want rank-and-file Americans to believe anyone can purchase a “machine gun” at a Wal-Mart.

“The fact that young teenagers can fire military-grade weapons in zombie, gangster and cowboy-themed simulators has proponents for Florida’s gun control laws getting fired up,” reports the Associated Press, noting groups such as Think Progress have already compared the “first automatic adrenaline attraction” to incidents where people have been killed, such as the 9-year-old girl who accidentally shot and killed her instructor at a gun range in Arizona.

And many gun ranges allow kids younger than 13 to fire real guns. They also allow those who could not even pass a background check to ‘rent’ a gun.”

Wes Doss, Machine Gun America’s safety and training officer, said gun control proponents’ objections are silly. “No one ever shoots by themselves, and no guest is ever in control of the weapon without a range safety officer next to them and participating with them,” he told The Daily Mail. “That’s what we want to communicate to people. No one here shoots by themselves, we want to make them feel comfortable and safe, and then they can have a good time.”

Machine Gun America said its Dec, 20-21 opening weekend “hit all our targets” for attendance and said it expects Christmas week and New Year’s weekends “will even be busier.”

Ohio Gov. John Kasich signed a bill into law on Dec. 19 that reduces training time to get a concealed weapons permit from a minimum of 12 hours to eight and allows licensed hunters to use noise suppressors while hunting certain birds and wild quadrupeds, including squirrels, rabbits and white-tailed deer.

The Ohio Senate and House of Representatives passed both bills on Dec. 9 and Dec. 10.

Despite reducing the required amounted of hours for CCW certification courses from 12 hours to eight hours, CCW classes will still need to provide supervised training and practice in a shooting range

Supporters say noise suppressors help protect hunters’ hearing by diminishing the sound of the muzzle blast, but they don’t silence the gun. Opponents argued quieter weapons are not as safe and are easier to use illegally.

New York: Is McAuliffe aiming for N.Y. with his gun control salvo?

The Sixth Circuit U.S. Court of Appeals on Dec. 18 ruled that a law prohibiting those who have been committed to a mental institution for any amount of time from ever again possessing a firearm is unconstitutional under the Second Amendment.

According to The Jurist, the challenge to the federal gun law arose out of a Michigan case involving Clifford Charles Tyler, who was committed to a mental institution for one month 28 years ago, after an emotional divorce. In 2011, Tyler was denied a gun permit because he’d briefly been in a mental institution in 1986.

The law in most states provides that a “mentally-disabled” person should be granted relief by the state and his or her gun rights restored ‘if the circumstances surrounding the disabilities and the person’s record and reputation are such that the person will not be likely to act in a manner dangerous to public safety,'” according to The Jurist.

Michigan has not enacted such a relief-from-disabilities program, which was why the court rejected the law, writes Judge Danny Boggs. “The government’s interest in keeping firearms out of the hands of the mentally ill is not sufficiently related to depriving the mentally healthy, who had a distant episode of commitment, of their constitutional rights,” he wrote.

The Sixth Circuit Court becomes the first to strike down a federal gun law under the Second Amendment since the Supreme Court struck down Washington, DC’s ban on firearms ownership in its 2008 Heller decision.