TOP STORY Suit challenges ‘prior restraint’ in banning 3-D printed gun blueprints from Internet The Second Amendment Foundation on May... 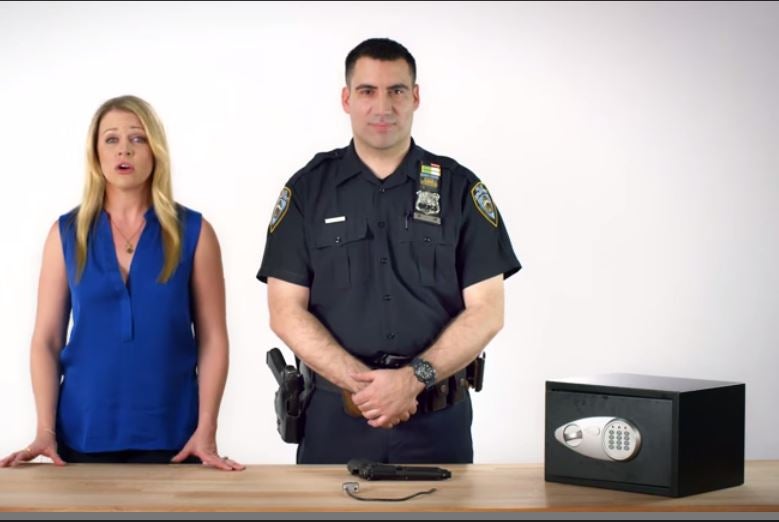 The Second Amendment Foundation on May 6 filed a lawsuit against the State Department and several of its officials, including Secretary of State John Kerry, claiming the agency violated Defense Distributed’s First Amendment right to free speech in 2013 by demanding it remove blueprints for the world’s first three-dimensional printable gun from the Internet.

The SAF filed the federal suit in Texas, where Defense Distributed is based, alleging the State Department and the Directorate of Defense Trade Controls (DDTC) violated Cody Wilson’s First Amendment rights by restraining him from publishing information about his pioneering innovation in the 3-D printing of firearms.

“The Internet is available worldwide, so posting something on the Internet is deemed an export, and to [the State Department] this justifies imposing a prior restraint on Internet speech,” Alan Gura, the lawyer spearheading the challenge, told The New York Times in a May 7 article.

“Prior restraint” is the unconstitutional censorship of speech before it’s published. “That’s a vast, unchecked seizure of power over speech that’s … not authorized by our Constitution,” Gura said.

Two years ago, the DDTC claimed Wilson and Defense Distributed had potentially violated International Traffic in Arms Regulations (ITAR), which regulates how Americans sell weapons beyond U.S. borders, by posting a 3-D-printable file of Wilson’s one-shot plastic pistol known as the Liberator to a Website.

SAF’s lawsuit now argues that whether or not the Liberator is a weapon, its blueprints are “speech,” and that Americans’ freedom of speech is protected online — even when that speech can be used to make a gun with just a few clicks.

“If code is speech, the constitutional contradictions are evident … so what if this code is a gun?” asked Wilson. who the Times describes as “a radical libertarian.” “Nothing can possibly stand in the way of this being disseminated to the people, and yet they insist on maintaining the power to do so.”

The Medieval Roots of Our DIY Gun Culture

The National Rifle Association is among advocacy groups, safety experts, and gunowners calling on Michael Bloomberg’s Moms Demand Action to end its dangerously inept Be SMART “gun safety” campaign before someone gets hurt.

“The NRA believes that one accident is one too many, which is why we do more than any other organization in the world to promote the safe and responsible use of firearms,” the NRA said in a May 5 statement. “The NRA teaches people how to prevent accidents from happening and has been successful in saving lives while, Moms Demand Action and other anti-gun groups funded by billionaire Michael Bloomberg exploit tragedies and use gun safety as nothing more than a talking point to further a political agenda that infringes on law-abiding citizens’ right to self-protection.

Firearms safety professionals are particularly alarmed with a Be SMART video featuring clueless celebrity Melissa Joan Hart. “Sadly,” writes Bob Owens in a May 6 blog on Bearinngarms.com, “while much of the video makes sense and appears have been pulled from advice provided by the NRA’s Eddie Eagle and firearms training programs and NSSF’s Operation ChildSafe campaigns, it still manages to fail on a spectacular number of levels.”

The “safe storage practices” shown in the video “are anything but safe,” writes Miguel Gonzalez in his May 5 blog on “Gun Free Zone.” Gonzales offers a breakdown of the MDA video, providing insight into obvious and potentially fatal flaws in offered as “advice.”

“We begin the usual blabber of guns are bad and, yes, you have a right but no you don’t (responsibilities!) and we follow with Mr. NYPD on Loan To Moms, a Beretta, a gun lock and a small gun safe, looks good,” Gonzales writes in his critique of the video.

In the video, the NYPD officer unloads the Beretta and places the magazine inside the safe. “And locks the safe? Huh? So, what happens to the gun?” Gonzales asks.

Then the Beretta is secured with a cable lock. “And that is it. I guess the gun stays OUTSIDE the safe,” he writes. “So either MDA is going to provide a safe, a gun lock and a cop to every household, or somebody again did not do its homework by interpreting the ‘secure your gun and ammo in different places’ in a rather bizarre manner. I can give you the double redundancy of having the cabled gun inside the safe, but locking the ammo and leaving the gun out? Oy!”

The NRA “welcomes Bloomberg to the party” in addressing gun safety, but noted the billionaire’s “new found interest in gun safety is simply a cover and convenient way for him to mask his real agenda—gun control.”

The bottom line illustrates where Bloomberg’s true intent lies, according to the NRA. In its fiscal 2013 filings, Bloomberg Everytown For Gun Safety spent more than $36 million in various anti-gun pursuits, but only $20,000 was spent specifically on gun safety, in the form of a single grant to faith-based group in the District of Columbia.

“While Bloomberg has spent $20,000 one time on actual gun safety (not counting the millions he spends on personal security as ‘gun safety’), the NRA states it has been teaching gun safety for 140 years, and has 110,000-plus instructors in all 50 states who teach firearms use and safety to nearly a million Americans each year.

In this instance, the NRA claims, bad advice is worst than no advice at all.

The N.R.A. Versus Michael Bloomberg

Gov. Mary Fallin’s desk is the next stop for legislation that allows a school district to designate a school worker with firearms training to carry a handgun on school property.

The Oklahoma House voted 82-12 for the Senate-passed measure Wednesday and sent it to Fallin to be signed into law.

The bill by Republican Rep. Jeff Coody of Grandfield says a school district’s board of education can designate a school employee to attend an armed security guard training program or reserve peace officer program and pay for the training.

Supporters say the measure would provide some protection from an armed intruder who posed a threat to children. Opponents expressed concern the legislation waives liability for any harm done by the armed school worker.

Oklahoma school districts would be able to designate an employee to carry handguns on school property under a bill approved on May 6 by the state Senate in an 82-12 vote and sent to Gov. Mary Fallin to sign into law.

The bill allows school boards to choose a school employee to be trained as an armed security guard or reserve peace officer. The training would be paid for by the school district and allows the designated employee to carry a handgun on school grounds. Oklahoma school resource officers can carry firearms already but the new bill expands the right to additional school staff.

According to the Law Center to Prevent Gun Violence, 39 states prohibit concealed carry permit holders from bringing firearms to K-12 schools. (Three other states allow schools themselves to ban such permit holders from bringing guns.) However, most states allow teachers with concealed carry permits to bring firearms, if they are granted permission from their school board or another authority.

The North Dakota, Wyoming and Colorado state legislatures are considering similar bills. While North Dakota’s bill requires school board approval, as well as special training by law enforcement for designated employees, Wyoming’s and Colorado’s respective legislation would extend the right to carry guns to schools to anyone with a concealed carry permit.

The Wyoming proposal repeals “gun-free zones” not just in public schools, but also in government meetings and at athletic events, and it passed the state’s House of Representatives in early May. Supporters compare it to laws in Utah.

Newsmax’s Chris Bondi and Josh Katzowitz have posted succinct analyses of how different Christian denominations within the United States view gun control, defining them as the five most conservative and seven most liberal.

In Bondi’s May 6 blog, he identifies the five most conservative denominations in regard to gun control as The Church of Jesus Christ of Latter-day Saints, Southern Baptists, Evangelicals, Jehovah’s Witnesses and the Religious Society of Friends (Quakers).

In his May 7 blog, Katzowitz names seven denominates he believes are the most liberal when it comes to supporting gun control. They are: Catholics, Lutherans, Anglicans, Presbyterians, Methodists, Baptists (excepting Southern Baptists) and Quakers.

7 Christian Denominations With Most Liberal Stance on Gun Control

5 Christian Denominations With Most Conservative Stance on Gun Control