Handgun Skills: What I Learned at the NSSF Shooting Sports Fantasy Camp

I don’t practice with my handgun much. This is partly because it’s locked in a safe back in the Midwest.... 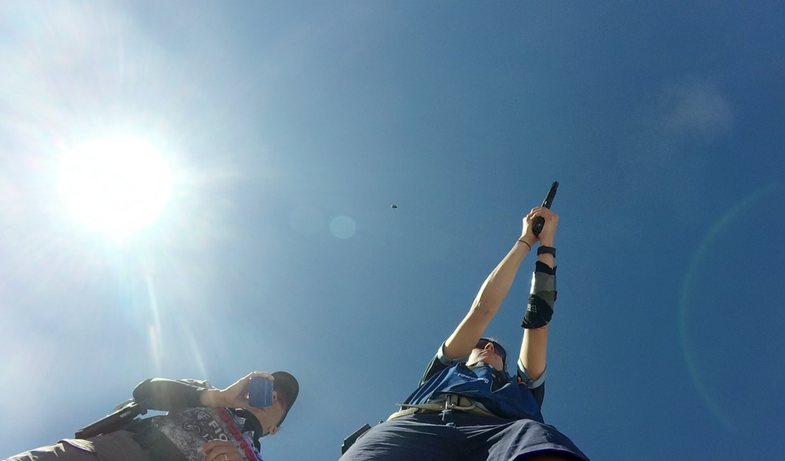 Firing practice rounds with Dianna Muller on the first day of camp. After completing training, I can tell that my elbows are too locked—I should have rolled them up and out slightly for better form and recoil management..
SHARE

I don’t practice with my handgun much.

This is partly because it’s locked in a safe back in the Midwest. And because I live in New York City, where such a proposal is laughable (and illegal, if you don’t have all your paperwork in order). But it’s also because if I do get a chance to practice my shooting outside of the city, it usually involves my bow or shotgun. There’s not much time for pistol practice when there are birds and big game to be hunted.

But that doesn’t mean I don’t need it. And that’s precisely why OL sent me to the first ever NSSF Fantasy Camp in Las Vegas earlier this month. 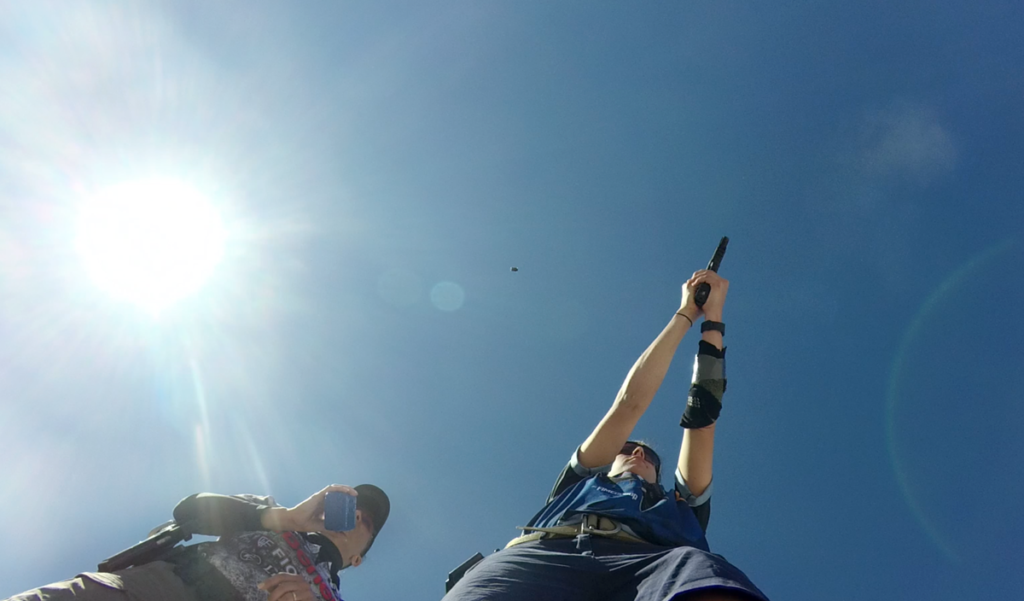 Firing practice rounds with Dianna Muller on the first day of camp. After completing training, I can tell that my elbows are too locked—I should have rolled them up and out slightly for better form and recoil management.

The concept was born when the writers behind The Truth About Guns asked why the public could meet and train with famous athletes from organizations like the MLB and NASCAR, but no such event existed to give recreational shooters the same opportunity.

So the NSSF set about making this fantasy a reality. Within two weeks of launching registration, the 30 spots open to the public had been snapped up—and a waiting list for future sessions filled up with more than 100 people. It’s not hard to imagine why, when you consider the impressive cast of pros who signed on to coach: Julie Golob, Jerry Miculek, Kay Miculek, KC Eusebio, Jessie Duff, Dianna Muller, and Ryan Muller.

This star-studded lineup attracted shooters from all over the country, with campers traveling from Alaska, California, Georgia, and every place in between. I was encouraged by the number of women who enrolled—it’s the first work trip I’ve been on where men didn’t significantly outnumber the women. On top of that, there was slightly more ethnic diversity than I’m used to seeing (usually none), another welcome change. Although there were a few young campers in their 20s, most were shooters in their 40s, 50s, and 60s. That’s not surprising considering the $3,000 price tag of enrolling in camp. Most younger adults I know don’t have that kind of cash lying around, myself included. That said, the fee did include all the professional instruction, meals, lodging, ground transportation, and plenty of 9mm ammo. 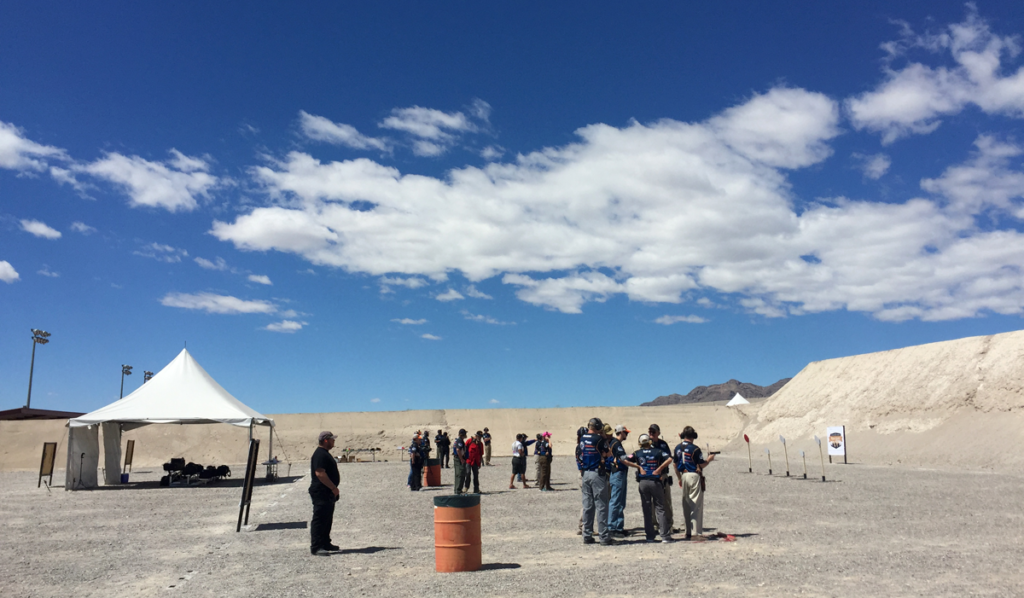 Campers ranged in skill and interest area. Some were already competitive shooters looking to shave a few tenths of a second from their times, while others were interested in boosting their self defense skills. Still others were novices who had never drawn from a holster before. I fell into the latter camp. I’m not new to handguns, and I passed my conceal carry class at the top of the pack when I lived in Missouri. But punching holes in paper with a .22 at close range isn’t exactly on the same level as fast-paced action pistol work. So I went into this with no expectations beyond the hope that I wouldn’t embarrass myself, and that I would learn a lot.

I promptly failed at my first goal. I forgot to pack a belt. This is because I don’t actually own one, and because I’ve never used a holster before so it didn’t occur to me to set about obtaining one. Once I got geared up though (there was a range master walking around somewhere with sagging pants that first morning), I didn’t feel too far behind. I was placed in a group with five campers who were also new to holster work. We kicked off the weekend learning to draw properly, and spent that first day rotating to different steel target stations, each run by a different pro. 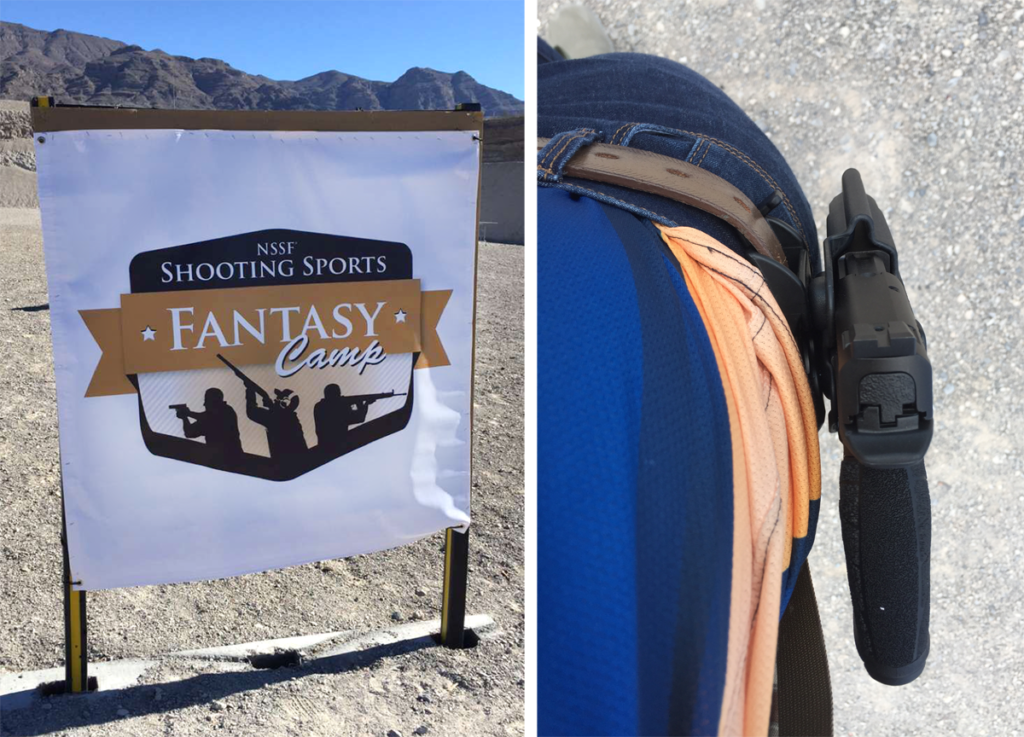 The interesting thing about the rotation was that each instructor overlapped in the content he or she covered, but still taught it slightly differently. For our group, this mostly focused on drawing. This mix of instruction could have potentially been confusing, but it was more like trying on new clothes at a store. We each experimented with our form and method until we found the technique that fit us best. None of the pros insisted their way was the only way to go about it, so there was no pressure to conform to a style that didn’t click.

What was the best part of the weekend? An informal survey of campers (conducted by yours truly) revealed that the people in attendance made the trip so special. Like any sleep-away camp, there was still that one guy who would’ve gotten shaving cream sprayed in his hand while he was snoring in the bunkhouse. But everyone else was overwhelmingly friendly. Especially the pros. They were accessible, relatable, helpful, and genuinely excited to be there. They’re also pretty funny. Here are some of the assorted tips I learned from them. 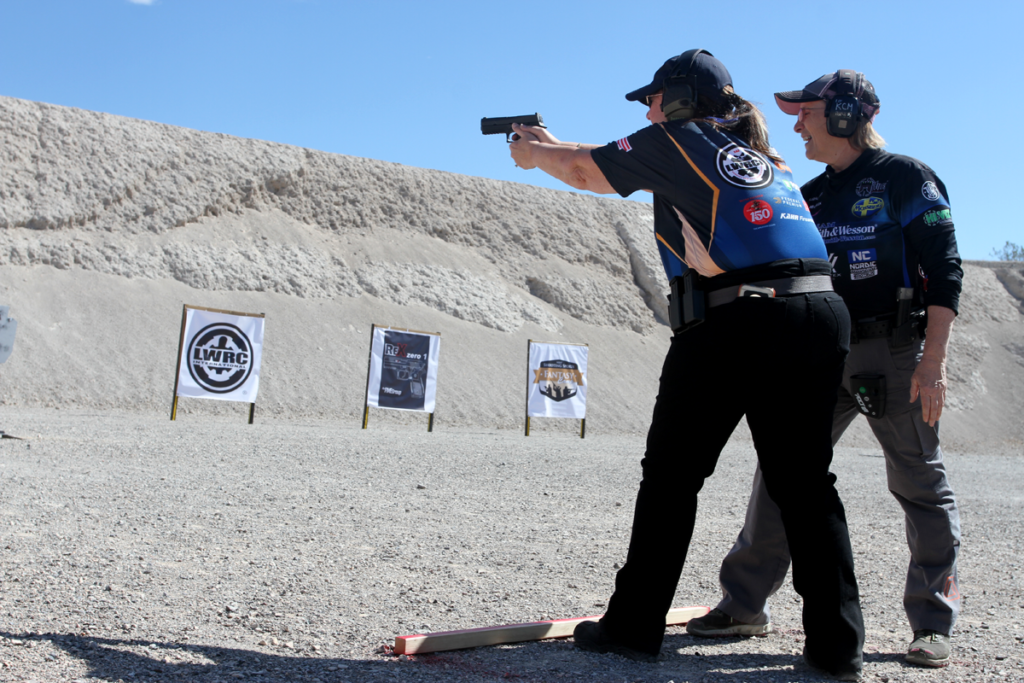 Pro: Kay Miculek
The biggest danger of shooting with a holster is both removing your gun from and returning it to the holster. If you try to holster your gun with your finger on the trigger, you will shoot yourself. It’s that simple. So get in the habit of tapping your trigger finger three times outside of the trigger guard before you holster it as part of your routine. 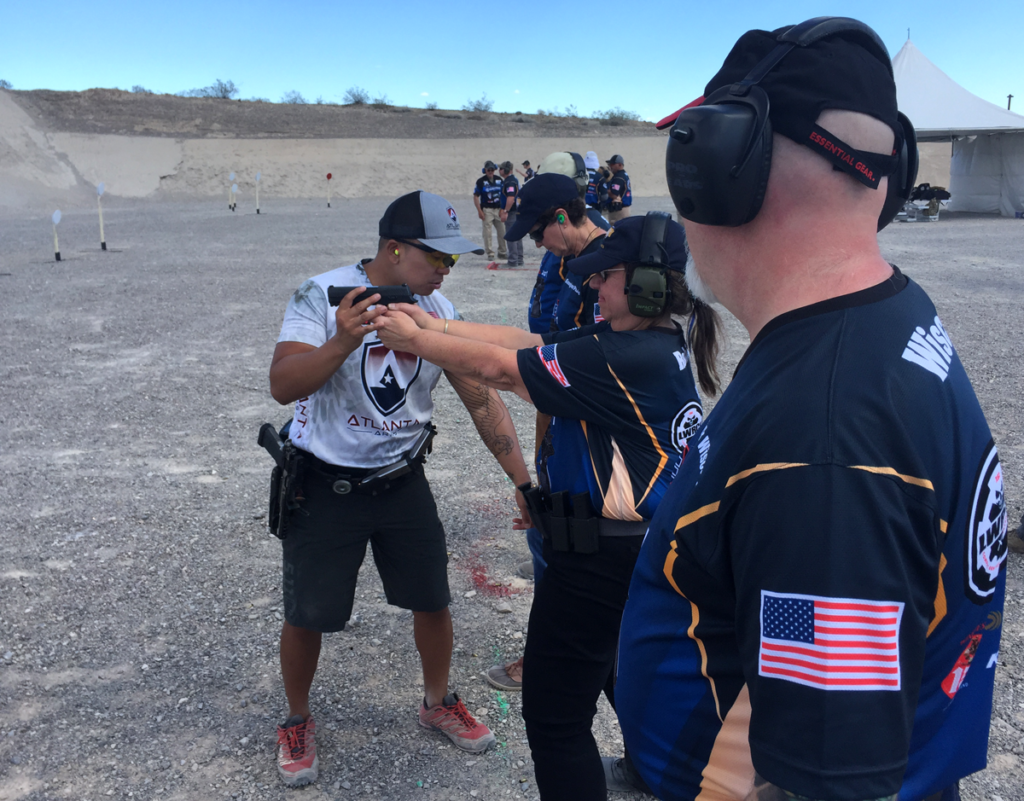 Pro: KC Eusebio
One of the fastest competitors of all time, Eusebio employs a 4-step draw. In reality, it should be seamless, but when you’re learning the fundamentals you can break it down like this:

1. Starting from the surrender position (wrists above shoulders), come to the gun with your dominant hand and a positive grip.
2. Allow your draw to come to your weak hand, meeting in the center of your torso.
3. Raise the gun under your chin, keeping your shoulders relaxed. Drop them a bit, disengaging the safety and keeping your trigger finger outside of the trigger guard.
4. Push the gun out, placing your finger on the trigger as you go and eliminating slack so you can fire as soon as you’re on target. 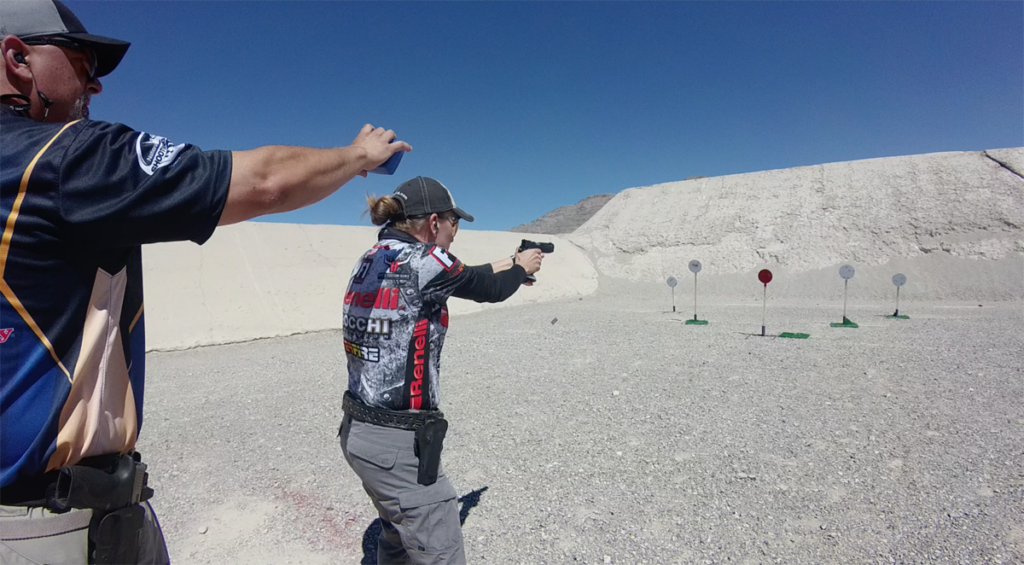 Pro: Dianna Muller
Once you get down the basics of your draw and dry firing, repeat it until it becomes second nature.

“Do that 10 times while you’re watching TV,” Muller told one camper. “Every night. For the rest of your life.”

Respect the challenging targets in a set up, Muller says. Don’t get complacent on the stop plate, or that fourth target that’s the farthest away in the lineup. If you have to take an extra fraction of a second to focus and give the steel the attention it deserves, do it. It will take less time than if you miss and fire again. (Respecting targets was her biggest mantra—she kept singing Aretha Franklin throughout the day to drive the point home.)

“Make sure you have a routine,” Muller added at the end of the second day. “This includes everything from drawing and firing to knowing where your stuff is in your gear bag and on your belt. Get in an order, because it keeps you from getting frazzled. It’s one less thing you have to worry about during a competition.” 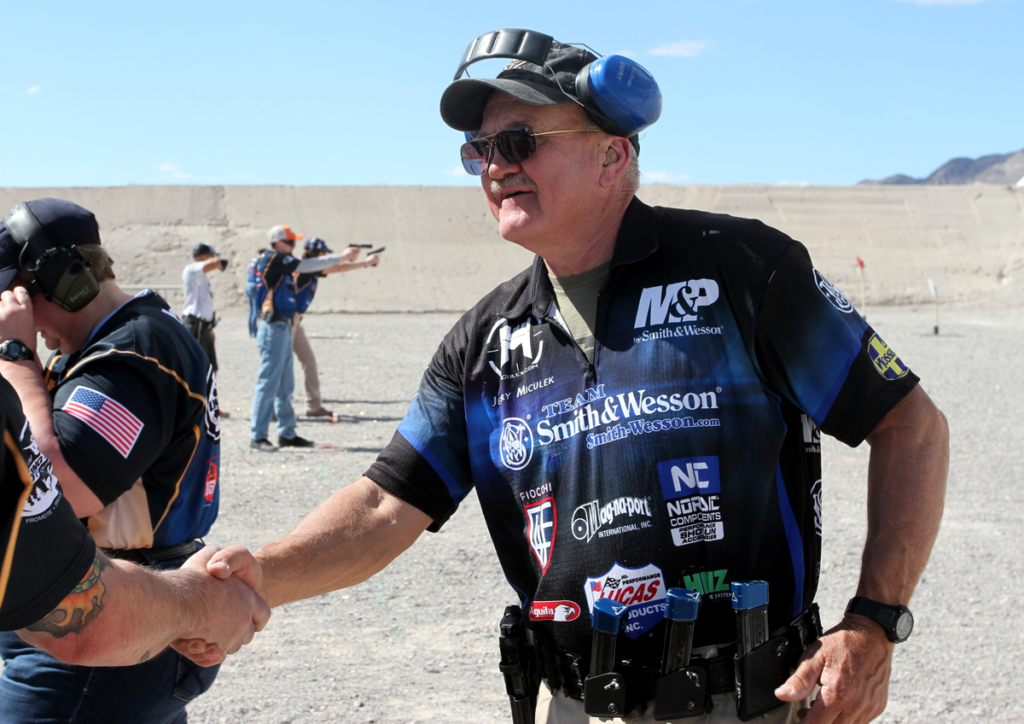 Among other things, it’s critical to maintain a balanced stance, Miculek says. Chances are that you’re distributing your weight unevenly between both feet. The way to check this is to stand on two bathroom scales at the same time, with one foot on each. You’ll be surprised at the discrepancies between the two. 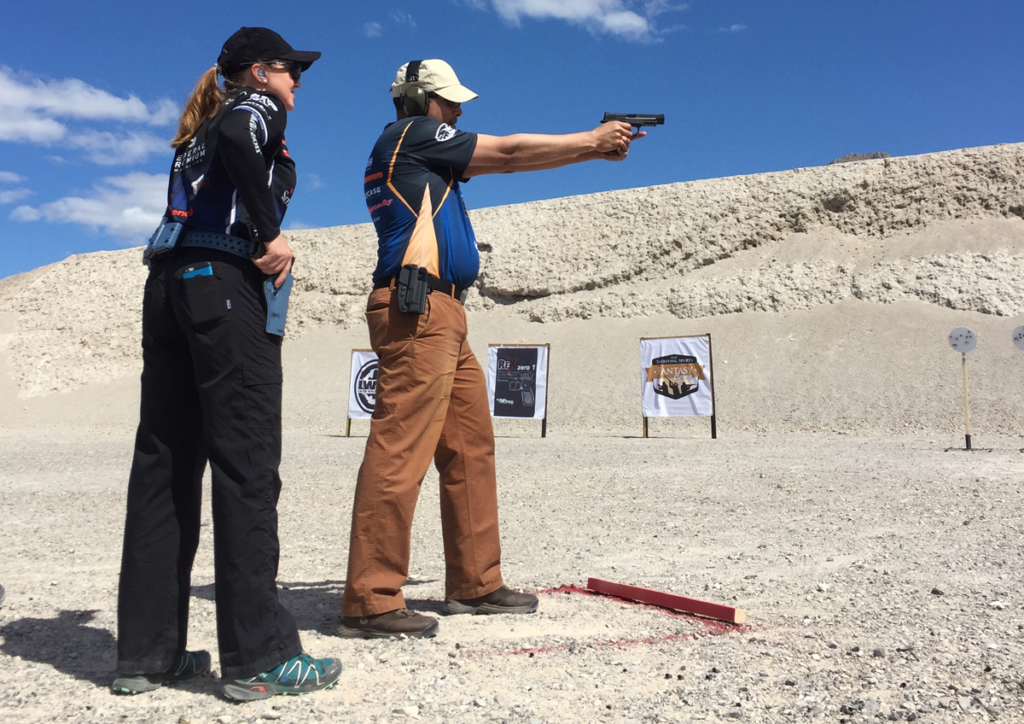 Pro: Julie Golob
Don’t hesitate when making your transitions between targets—drive. If you’re drilling on a setup with spaced out targets (like the one below), make an aggressive push from your previous target to the next, and keep the momentum going.

Pro: Ryan Muller
Begin by facing the target that you’re going to end on (in the above picture this is the center target, or stop plate). Your stance should be aggressive, but not unbalanced. Your feet can be shoulder width apart, or a little bit more, whatever’s comfortable. 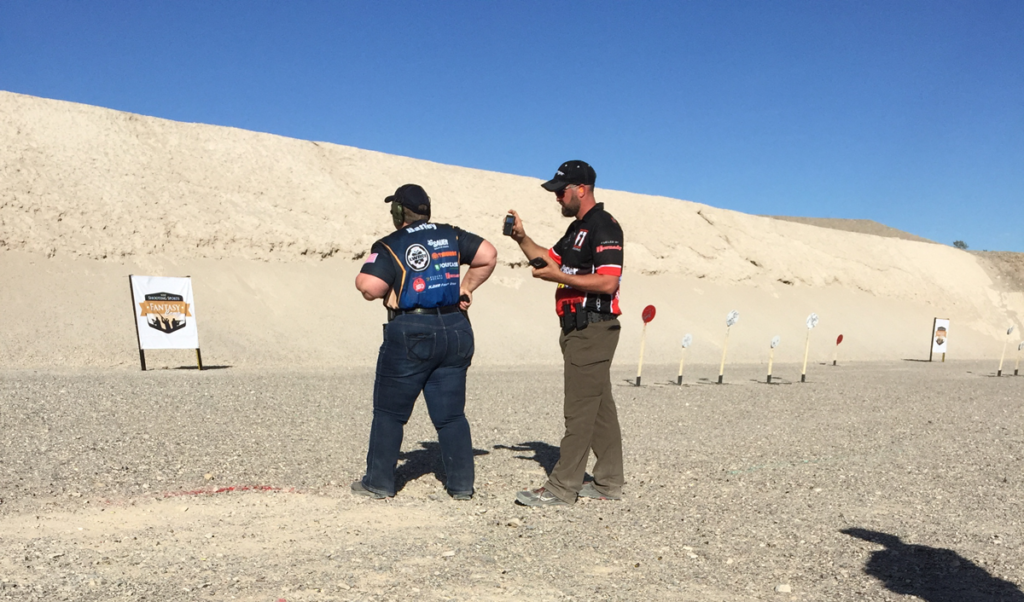 Now those are just a few tidbits that I jotted down. They’re no substitute for the real learning that came from physical practice, especially repetitive drawing and dry firing, and the personalized feedback on individual strengths and weaknesses. Among other issues, for instance, I naturally assumed an extremely bladed stance that prevented me from using a full range of motion when driving to targets on my left side.

I trained with Dianna Muller for the entire second day, and her guidance was invaluable. The main thing we focused on was my trigger work. We agreed I would think about the phrase “90 percent” when acquiring each target. This refers to the fact that I should ease 90 percent of the slack from the trigger while moving between steel plates. This strategy encouraged smooth firing instead of trigger-slapping and worked well—when I remembered to do it.

Camp concluded with the competition at the end of day two. It was a friendly match of timed trials, with each team competing for bragging rights and prizes (like some sweet ReX Zero 1 guns, among other swag from the sponsors). I’m a competitive person and usually do well under the pressure of organized athletics, but I was still too much of a novice to perform consistently when it came down to the wire. My times on each 5-target station ranged from a painful 18.5 seconds all the way down to a 5.08 trial—my best of the weekend.

My takeaway from camp? I’m fully capable of shooting both accurately and quickly, thanks to all the expert guidance. I just need to keep practicing. Now, I won’t be able to weasel my way into camp again anytime soon, but you might—if you hurry up and get your name on that list.

Photographs and video by the author; photograph of Jerry Miculek by John C. Lin