I guess I’m a felon

And here I thought it was my Second Amendment rights that were most endangered. Turns out, it’s my First Amendment... 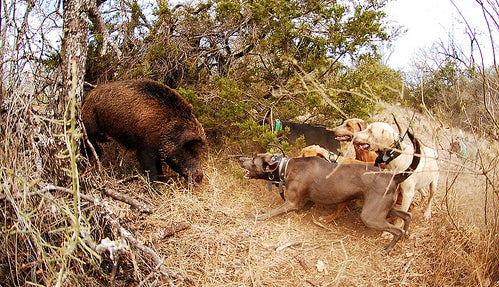 And here I thought it was my Second Amendment rights that were most endangered.

Turns out, it’s my First Amendment rights that are in jeopardy.

I could go to jail for just doing my job. I could get three years in the slammer for the photo I snapped of my proud puppy retrieving a fall turkey. I might get probation for my grainy video of a turkey being killed by an ecstatic first-time crossbow hunter.

My friends over at Versus Network may do hard time for their televised hunting shows that show animals being killed. Anyone who takes a photo or shoots a video of hunting is a potential felon.

That’s the chilling conclusion of a federal court ruling that indicted Virginia outdoor writer and videographer Robert Stevens on animal cruelty charges. He was convicted and sentenced to 37 months in federal prison and three years of supervised release. For what?

For selling videos that depicted dogfighting. Now, I find dogfighting reprehensible, and I’m happy that it’s illegal in nearly every state. But here’s why you should care about Stevens’ case: one of the indictments stemmed from a video, “Catch Dogs,” that showed hunters using dogs to track and hold wild boars.

There was nothing illegal about that where the video was shot. Many states, especially in the South and East, have a long and honorable tradition of using hounds to track and bay wild pigs. I grew up hunting coons over red-tick hounds. I hunt birds over flushing dogs. Am I participating in federally prohibited animal cruelty?

Stevens’ conviction was based on a federal law banning “depictions of animal cruelty.” Note that it’s not the act of “cruelty” itself that was in question, but rather the distribution of the images in states where the act depicted might be illegal.

It’s convoluted, and happily an appeals court overturned Stevens’ conviction. But the whole case, which is now before the U.S. Supreme Court, raises some unsettling questions, like:

• Am I breaking federal law if I photograph a crossbow hunt in Ohio, then sell the photo in Oregon, where crossbow hunting is illegal?

• Are my pictures of mountain lion hunting with hounds in Montana considered illegal if I distribute them in California, where hound hunting is prohibited?

• How about the hero shot of a happy 10-year-old with their first deer? Could I do time for showing the picture in a state where the minimum hunting age is 12?

Those are silly examples, but they are the very sorts of thing that might be regulated by this law.

Robert Stevens’ conviction was a full five years ago, but his case is getting a very public review now because his appeal has been taken up by the U.S. Supreme Court. How the court rules will affect every outdoor writer, photographer and hunter in America.

The Humane Society and some radical government lawyers are claiming this is a case about dog fighting. If they get their way they will work to make more traditional hunting methods illegal, and then prosecute writers and photographers who get caught up in this Orwellian circle.

This isn’t a case about animal cruelty. It’s about the First Amendment, and readers should get just as hot about infringements to free speech as they do about attacks on the Second Amendment.