Fifty-three hours. That’s how long I sat on a plastic deck chair inside a 4-by-4-foot ground blind, looking over the... 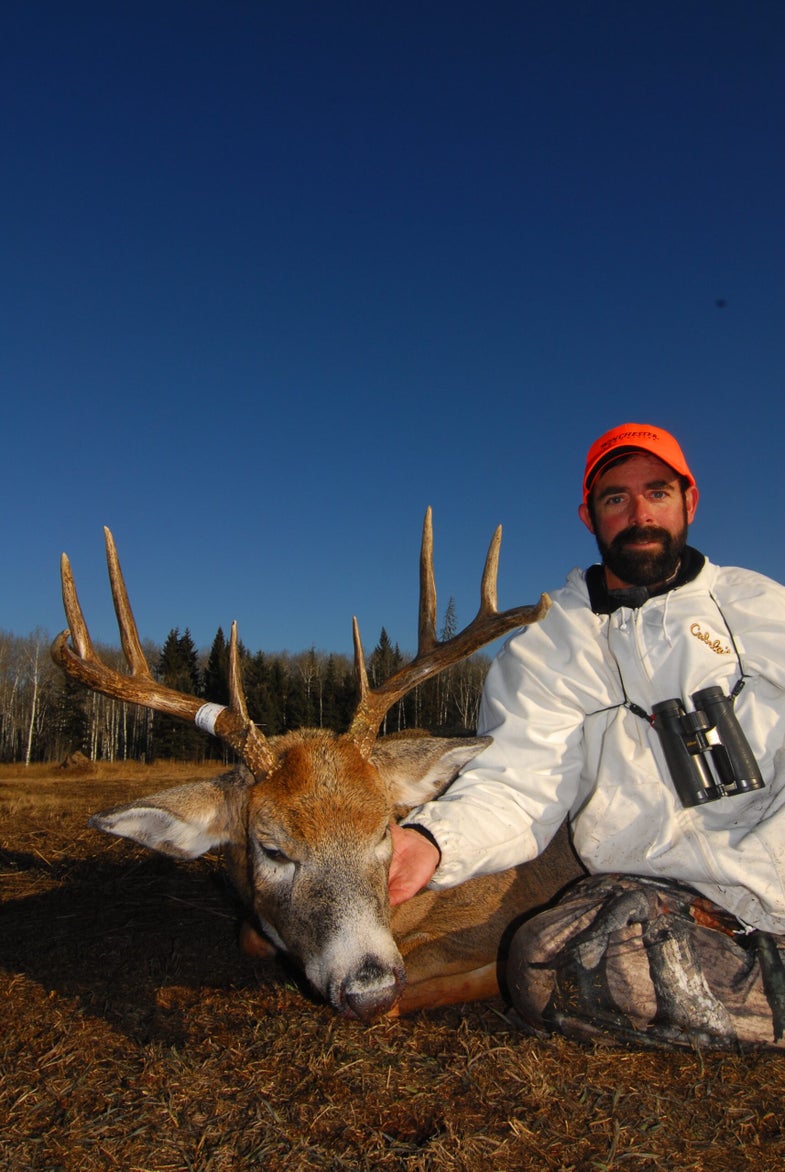 Fifty-three hours. That’s how long I sat on a plastic deck chair inside a 4-by-4-foot ground blind, looking over the same 40 acres of Saskatchewan woods before I finally killed a buck on Friday.

This hunt for a big Canadian buck was the toughest hunting challenge of my life, and I hardly moved a muscle. Mentally straining, psychologically crushing, I sat in the same seat–actually two, since I moved blinds after the first two days in the field–for 12 hours a day straining to see a bruiser buck step out of the poplar forest.

By the end of the day my back hurt, my knees throbbed and all that unfulfilled anticipation wore me down.

Problem was, the weather was so balmy–at least by Saskatchewan standards–that the deer weren’t moving much, and the bucks weren’t actively cruising the bait sites. I guessed they were nearby, but working does at night. Perhaps rattling might draw one out of the woods, I suggested to my guide, but he shut me down. Don’t rattle in the blinds, he said. Scares away the does and the bucks won’t hear anyway.

Thursday was the worst. I sat a new stand on Wednesday, and because it was new real estate to me, and because a dozen does and tiny bucks worked the area, I had plenty to see. Late that evening, well after legal shooting light, I saw a buck come into the clearing. He looked wide, but had weak brow tines, at least what I could see in the shadows. I returned to the blind on Thursday, saw the same does but not a single buck. I felt like I was in some sort of back-woods penitentiary, unable to move or make sounds lest I scare away the buck just out of sight.

So when I returned to the blind on Friday, my last full day of hunting, I smuggled in some synthetic rattling antlers. I just had to take control of this situation. After four hours on stand, I pulled out the horns, slammed them together and watched all the does flee the clearing. Maybe my guide was right.

But less than 10 minutes later a smallish 4×4 buck appeared, head up and walking stiff-legged like he was expecting to get his butt kicked. I passed him up, then another buck came in. After another five minutes I heard crashing behind me, like a UPS truck was driving through the woods. I got my rifle ready just as a big buck ran out of the cover.

All I could tell was that he was wide. It happened too fast to count points. He didn’t look like he was going to stop, and because he was barely quartering away, I held on his front shoulder. I sneaked the bullet–Winchester’s new bonded Power Max–behind his rib and took out the top of his heart.

He’s no monster, but he’s really nice 4×4. Unlike most of these deep-woods bucks, which are heavy and tall, but narrow, this guy is wide. With weak brow tines. Probably the same buck I saw Wednesday night.

I’m headed home. The 525-mile drive is the last thing my butt needs after sitting all week. But at least I get to see the scenery change.