Finally, we’ve broken the seal on Saskatchewan bucks. After two days of all-day sits on stand, the four of us... 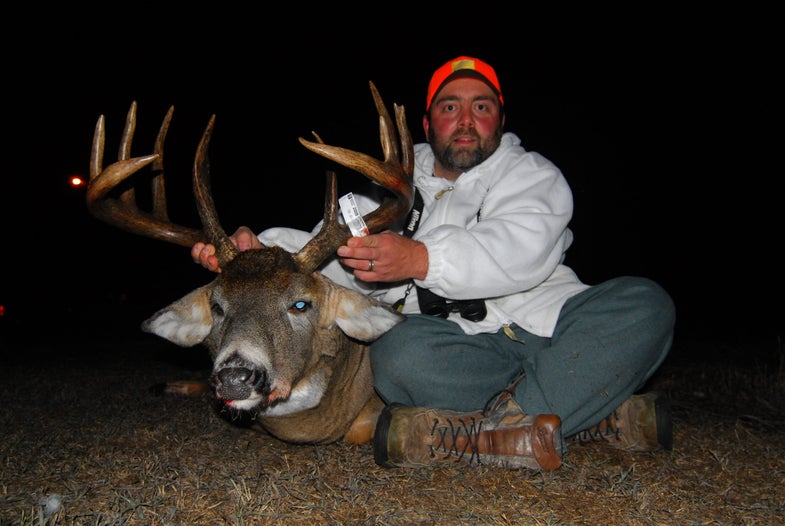 Finally, we’ve broken the seal on Saskatchewan bucks. After two days of all-day sits on stand, the four of us hunting together return to camp each evening a little dejected.

We’ve seen some decent bucks, but no clear-and-present shooters. Until tonight. Check out the photo of the bruiser that Jon LaCorte put down just as legal light faded this evening.

LaCorte is the reason I’m hunting Saskatchewan right now. Jon, the senior product marketing manager for Nikon’s Sport Optics Division, has hunted this camp near Meadow Lake three times previously, and he’s been baffled by the lack of action this week.

We’ve seen some chasing, some very hot does and some junior bucks with big, swollen necks and grand ideas of their romantic potential.

Jon has been on the same stand, about 30 feet up in a spruce tree, for the past three days. Finally, he saw a buck worth shooting, but the interesting thing about Jon’s experience is that it happened in such low light.

“I’m not blowing smoke, guys, but I got this buck because of optics,” Jon said when he returned to camp, the bruiser on the back of his 4-wheeler. “I spotted him with optics and I nailed him with optics.”

Jon made a great shot with his .300WSM and 180-grain Winchester E-Tip bullets. The buck went about 20 yards and piled up. What a deer. Check out the bladed brow tines and the sky-high G2. Main beam length is also tremendous, thanks to a curve that maintains its mass all the way around the bend.

I’m on stand again in a spot where I saw some decent bucks. I’m hoping I see one anywhere near the caliber of Jon’s great deer.