Home On The Range

This past fall, on a featureless reach of Montana prairie, I sailed a broadhead right over the back of a... 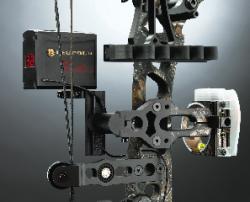 This past fall, on a featureless reach of Montana prairie, I sailed a broadhead right over the back of a 15-inch antelope.

I thought the pronghorn was closer, obviously. The buck snorted, turned himself inside out and is probably still sprinting for the horizon. I judged the antelope at 35 yards. He was closer to 25 yards, but on the open plains, I was pinned down by his vigilant eyes as he approached, and with no shrubs or fence posts to use for comparison, I had no references to judge his body size or distance. I had no time or cover to reach for my laser rangefinder, so I had to guess the distance.

That’s why I’m intrigued by Leupold’s new bow-mounted laser rangefinder. The unit, which the venerable Oregon optics company is calling “The Vendetta,” was introduced at last week’s SHOT Show. It certainly would have helped me make that antelope shot, and Leupold is betting it will appeal to many of America’s 10 million archers, whether they’re shooting at elk or whitetails or bullseyes. The Vendetta will be available April 1.

The greatest asset of the bow-mounted rangefinder is that it is literally at your fingertips. A pressure-sensitive trigger switches on the unit, and is connected by a wire to the unit, so you can place the trigger wherever it’s most comfortable and instinctive for your specific grip. I’ll put mine on the forward edge of the grip so I can easily trip it with my index finger.

Because it’s mounted on the bow’s riser, and designed to provide readings at full draw, you can range the distance with no more motion than it takes to draw your string. No fumbling with a separate rangefinder, no extraneous motion as you raise the rangefinder to your eyes, find the animal in the optic, put the unit back in your pocket, then pick up your bow to draw.

About three inches tall and weighing just 10 ounces, the read-out unit is compact enough that you can mount it on the riser of your compound, just above your sight, and the bracket can be reversed for either right-handed or left-handed bows.

The Vendetta has a laser dot to align the sighting laser. The idea is to “zero” the laser dot with the pin of your choice (the top pin makes the most sense) so that you can range quickly and accurately and then adjust your hold to the correct distance. Once you have calibrated the unit to your pin, you don’t need the laser dot anymore. When you press the trigger in the field, you’ll activate only the invisible scanning laser of the rangefinder.

Distances are displayed with red LED on the rear of the read-out unit. The laser’s range extends from 10 to 70 yards and includes Leupold’s angle-compensating technology that’s tuned to archery ballistics.

It should be noted that Leupold isn’t the first optics company to introduce a bow-mounted rangefinder. How many of you recall Bushnell’s Yardage Pro Bow, which was introduced about 10 years ago and never really caught on?

The Vendetta’s price–$300–may limit its appeal, but the bigger issue is regulations that prohibit its use during archery seasons. In many Western states, bow-mounted electronics are prohibited, and any animal killed with a bow adorned with The Vendetta is ineligible for Pope & Young inclusion.

Leupold is working with state game agencies to revisit the prohibition, but the laser aiming point may be hard for some states to overcome. That’s a shame, because The Vendetta’s real value is its ability to make arrow placement more precise and lethal, and the bowhunters who use it more sure of their shots.