Guest Blogger–Gayne C. Young It was the perfect shot, right where the stripes converge in a triangle pattern atop the... 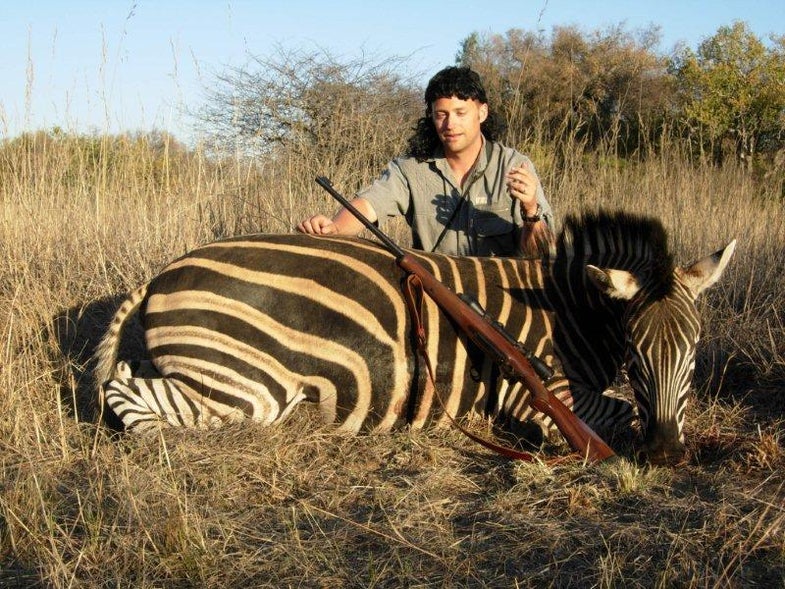 It was the perfect shot, right where the stripes converge in a triangle pattern atop the forward haunch.

The Remington .375 H & H Mag. pierced the skin and mushroomed through both lungs, causing the old zebra stallion to swirl forth in an explosion of dust and kicked up earth. Bucking from shock and the pain the old patriarch disappeared in his created storm only to reappear some twenty five yards away in a tangle of thick scrub where upon he finally succumbed and lay down. But while congratulations from my PH Eric Sorour and skinner Alfred whirled about me all I could think was, “Stupid horse fell in the worst possible place for a photo.”

Being an outdoor writer involves more than just hunting and writing. It also involves taking pictures and making sure they’re staged appropriately. I have to make sure the light is right, that the animal is treated with respect, and that the subject matter isn’t too gory. Because of where the zebra fell this was going to be a major problem for me.

“The light’s no good here,” I reluctantly explained to Eric. “We’re gonna have to move him.”

“Might be easier said than done my friend,” Eric countered.

And he was right.

Eight hundred pounds of dead horse is heavy. Very heavy. Still, we managed to get him into the back of the truck.

After the zebra was loaded Eric drove us to a more open spot where we could stage better pictures. Everything looked good until we went to unload the zebra. That’s when we discovered that, apparently, zebra’s succumb to rigor mortis much more quickly than other animals. At least their legs do as they were locked tighter than Fort Knox.

Despite Alfred jumping up and down on the carcass with Eric and I pushing against the legs as he did, we couldn’t get the zebra’s legs to lay correctly. Even after Eric cut the tendons the legs simply would not bend. After all was said and done the only thing that got the zebra in postion was a combination of partially hacked legs and small holes in the ground.

And people think hunting writers have it easy.