A Guest Blog By Gayne C. Young: After my PH Eric Sorour and skinner Alfred had successfully helped me “stage”... 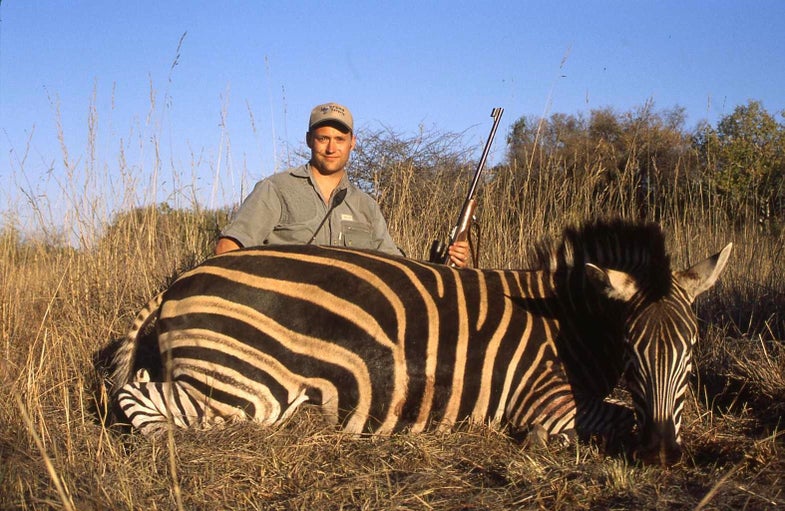 After my PH Eric Sorour and skinner Alfred had successfully helped me “stage” my zebra for a few shots it was time to head back to camp. With night falling and an hour long drive ahead of us it was a good idea to get loaded and get back ASAP (because even if Africa, that beer don’t drink itself). Yet once again, the zebra failed to cooperate. This time it wasn’t the weight; it was the girth.

During our photo shoot the zebra’s gut had been busy filling with gasses from death, fermenting grains and grass. With a shooter’s bench in the back of Eric’s Land Crusier loading a bloated zebra would be a major problem as it would have to go underneath the bench.

Try as we might we simply could not shove that bloated zebra under the bench. The only solution that we could come up with was to “gas” the zebra. Using a small knife Eric pierced a small hole through the animal’s thick hide and into the stomach. Immediately the area was filled with the sound of flapping zebra intestinal wall–imagine a thirty-minute continuous fart–and the smell of, well,…again, imagine a thirty-minute continuous fart. The air was putrid and we all gagged. It seemed no matter how far we walked away from the body the smell still lingered. It was so bad that it was one of the few times I didn’t need a translator to understand what Alfred was complaining about.

“SOMETHING IN AFRIKANS,” Alfred gagged.

Once thin enough to slide the zebra in the truck we loaded up and headed back to camp.

I really felt for Alfred during that hour-long ride though. Every bump and hole in the road shook the zebra enough to cause it to squeeze out a little more smell. The next hour was filled with variations of following:

Bump in the road.

Eric complains about the road.

Alfred moans in the back.

Ahhhh, the life of the outdoor writer.