On the way out of Neiman Marcus (Man, they’re hunting department just ain’t what it used to be!) the other... 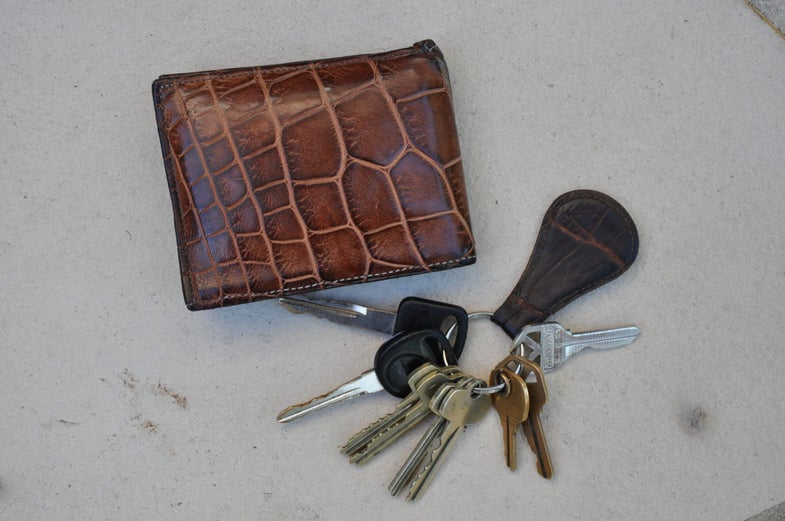 On the way out of Neiman Marcus (Man, they’re hunting department just ain’t what it used to be!) the other day my daughter remarked that our shopping bags “looked like alligator skin.” I hoisted one of the silver bags to examine it and saw that sure enough the heavy paper was embossed with an alligator skin pattern. I didn’t give the pattern much thought until later that evening when I saw it again on a set of bedroom furniture in a catalog. Since then I’ve seen the pattern, as well as both real alligator and crocodile skin, on a number of products in catalogs, stores, and in magazines leading me to believe that reptiles are back “in” fashion.

Alligator and crocodile leather has always been in vogue for high-end personal items such as wallets, purses, and belts but its use on furniture and other items has more or less followed designer whims, the skin market, and economic trends. Regardless of whether usage of these skins is “in” or not, the fact remains that alligator and crocodile skinned products are very pricy.

Unless you kill the animal yourself.

Prior to my last alligator hunt, I called Richard Sanders and spoke with him at length about having a few wallets made from any alligator I might take. His company, Walden & Bork is world renowned for turning game hides – not just reptiles- into luggage, wallets, purses, and just about anything else you can think of.

Richard gave me all the details on the best trophy size for leather (6 to 8 feet), trophy prep, and where to have the skin tanned. When I started talking to him about what style wallet I wanted he reminded me that I had to get a gator first. Luckily, my hunt turned out better than I had hoped as I ended up taking two swamp dragons instead of one.

Two alligator hides provided Walden & Bork with enough leather for three wallets, a pair of boots, and more key fobs than I knew what to do with. And while the final bill was steep for a starving writer like me it was actually less than I would have paid for having the gators mounted. If I had purchased these items at Neiman’s they would have cost ten to fifteen times as much. But then again I wouldn’t have bought them at Neiman’s. The best part of my new leather goods of course is that when people ask where I got them I can reply that “I had them made from a couple gators I took on a hunt….”