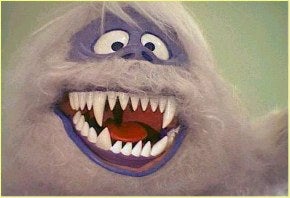 Afanasy Kiskorov might just be the bravest hunter I’ve ever heard of.

Or prone to delusions of grandeur.

According to the ITAR-TASS World Service, last week big game hunter Kiskorov of the village Senzaskie Kichi in the Kemerovo Region of Siberia (Honestly, can anybody really pronounce these names?) was fishing with friends on the river Kabyrza (My God, what do these people have against vowels!?) when he heard breaking ice and a shrill cry. Kiskorov and his friends rushed to the sound to find “a creature, covered with dark-brown fur” apparently drowning about ten meters from shore. Based on signed letters obtained from the men, district officials reported that “The strange creature, looking like a huge man, tried several times to get out of water and to stand up on both feet, but dropped into the water each time and was howling. The hunters stood frozen and only Kiskorov hurried to offer help: he threw the creature the dry trunk of a young aspen tree, the creature clutched to it and crawled to the bank.”

Not to make a stereotypical assumption here, but how much vodka would a Ruskie have to drink in order to honestly believe you saw a yeti let alone saved one from drowning? My guess is one hell of a lot.

Or maybe Kiskorov really did save a yeti from drowning.

All I really know is that I’ve got a bottle of vodka waiting on me and I’ve got a hankering to see a yeti.

What do y’all think? Did Kiskorov save a yeti?