Man-Crush – When a straight man has a “crush” on another man, not sexual but kind of idolizing him. -Urban... 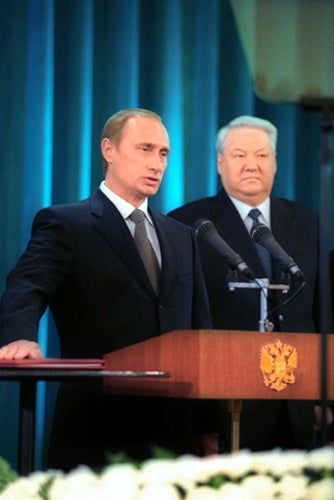 Man-Crush – When a straight man has a “crush” on another man, not sexual but kind of idolizing him.
-Urban Dictionary

Despite the fact that neither Prime Minister Vladimir Putin nor his office has contacted me after several requests, my Putin man-crush continues to grow. This past week, his camp released several action shots of him in the rugged Russian backcountry that seem to solidify what the press has termed his “modern-day Marlboro man” image. The photos show Putin – dressed in full camo – exploring the backcountry on horseback, admiring a large trout he’s holding aloft, and navigating some difficult terrain with a scoped hunting rifle over his shoulder.

Putin is extremely popular in the former Soviet Union and his love of the outdoors is very well known. Speculation is that these photos were released in effort to further boost his popularity and keep him in the public eye as he is rumored to be considering running for president in 2012. I however, think these photos were released for another reason – to show how incredibly cool Vlad is!

And it is because he is so cool and that we have so many things in common – rugged good looks, stylish dress, an appreciation for the outdoors, fondness for high adventure, and love of a good beer – that I desperately want to go hunting or fishing with him. The only problem is that I’m not sure he’s reading my blogs or getting my emails. Actually, I know he’s not getting my emails. Otherwise he would have responded to me by now. Putin doesn’t seem like the kind of guy who would blow me off, if he knew who I was.

As emailing hasn’t worked I have decided to take to the phone. In the next few days I will use all my journalistic talents and phone skills to get an interview with Prime Minister Vladimir Putin and hopefully an invite to head afield with him.

I’ll keep you posted so keep checking back. What do you think Outdoor Life readers? Will I get that interview? Is a trip to Russia in my future? Given the choice between me and Vlad, who would Aishwarya Rai pick for a night out on the town?
Comment below!