The Old Man and the Moose

Eighty-one-year-old attorney and former District Court Judge Jack Middleton is an experienced outdoorsmen. He has been on three hunting trips... 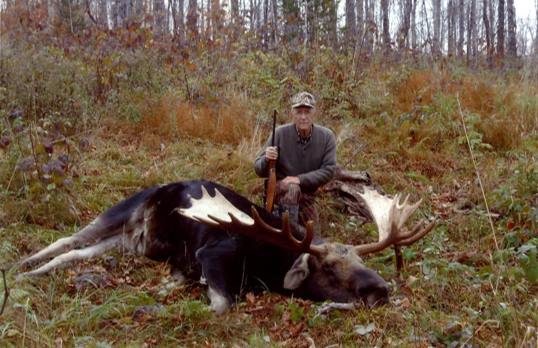 Eighty-one-year-old attorney and former District Court Judge Jack Middleton is an experienced outdoorsmen. He has been on three hunting trips to Africa, and with his son once undertook a journey across North America, on a mission to hunt every species of caribou from Newfoundland to Alaska. However, he has lived in New Hampshire for most of his adult life and despite entering the lottery every year for at least 20 years, had never won a moose permit.

This year he finally got lucky, not only drawing a moose tag, but getting one for the A-2 zone, far upstate, which he describes as the best-possible region.

His good fortune continued, and the moose he shot set a new state record for largest rack, measuring 68.5 inches across and narrowly beating the previous record of 68 inches.

New Hampshire moose season is only a week long. Accompanied by his son Peter and a local guide who knows the area well, Middleton set out on his hunt last month. “You could get lost in there and never find your way out,” he said “It’s a huge maze and there are a ton of logging roads.”

All they saw the first day were a cow and two young bulls, so Middleton began preparing himself for what he thought was going to be a long hunt.

The next day, about 17 miles off the nearest main road, Middleton’s guide drove to the top of a hill, stood on top of his car, and through his binos spotted three black dots about half a mile in the distance. “There are three moose,” his guide said “one of them must be a bull.”

The area they were glassing, had been logged in the past few years and was full of shoulder-high sprouts, which moose love to munch on. When they arrived, they realized there were actually four moose, two cows and two bulls, and one of the bulls was significantly larger than the other. They approached stealthily for almost a mile without being seen. Middleton got in position and took his shot when he got within 80 yards. The big moose dropped instantly.

“It was unexpected,” said Middleton “I lost sight of him after the shot, and they had to tell me ‘No, no you got him’ to stop me from firing again. I don’t know what would’ve happened, I probably would have gone to state prison for shooting the other bull,” he says jokingly.

“This is when I was delighted to have a guide.” Middleton says, as they faced the daunting task of getting the giant back to civilization. “At that point, there were five us, so we had some helpers, but it was easy as pie.” After field dressing the moose, they tied the head on top of an Argo ATV, hitched up the rest of the animal and “buzzed out of the woods like nothing.”

The moose weighed in at 725 pounds. (The largest moose ever taken in the state weighed 1,040 pounds dressed and was killed in 1993.)