The first two days of my Wyoming elk hunt were pure Indian summer. It was cool, but the skies were... 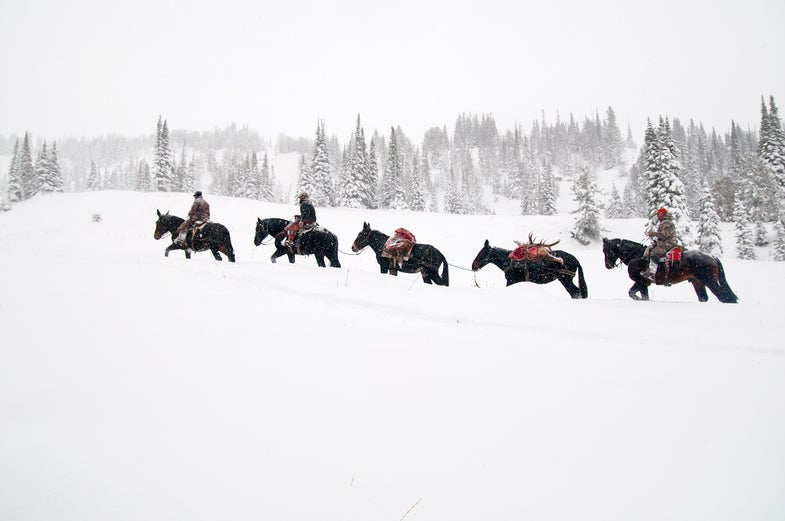 The first two days of my Wyoming elk hunt were pure Indian summer. It was cool, but the skies were clear and on top of the mountains we could see for 80 miles in any direction.

And then the snow hit. We got hammered. Temperatures dropped. The wind picked up. Low clouds rolled in and we could hardly see from one side of a drainage to the next.

We awoke one morning with snow to our knees. The next day it was up to our thighs. I had been hoping for some tough weather to get the animals moving, but this was too much of a good thing.

Mule deer are sensible creatures. As soon as the snow started piling up they bailed out of the mountains for lower ground. We had deer tracks everywhere, and I saw a number of bucks I would have loved to shoot if I had had a tag.

Elk are made of sterner stuff. They barely noticed the weather, or if they did they simply didn’t care. The hours my friend Ryan and I spent on horseback forcing our way up one mountain to the next yielded nothing. We hunted from dark to dark. We spotted a cow elk here and there but no bulls.

At noon we would build a fire in the lee of some trees to escape the 50 mph gusts, eat lunch, melt the ice that had formed in our water bottles and try to get some warmth back into our bodies. We would untie our bedrolls from our saddles–mine was an emergency blanket/tarp–and try to nap on the snow as close as we dared to the flames of our pinewood fires.

The last day of our hunt was going to be a half-day. If we didn’t kill a bull before lunch, there wouldn’t be any way to get it packed out before we had to ride to the trailhead the next morning.

It was getting close to quitting time when Ryan spotted a bull two ridges away, feeding in a small alpine meadow above a band of cliffs at the top of a mountain. We knew it was going to be hard on the horses and hard on ourselves to get over to him, but we made a go of it.

Ryan knew the country well and got us to within a couple hundred yards of where we had last spotted him. We stalked through the deep snow to the meadow and found his bed and tracks–but no elk. His tracks ambled off through some timber and we followed them through the jack pines and fir trees and across an open, snow-covered field. Against all reason, he was headed back to even higher country. Tough animals.

We spotted him bedded down a few hundred yards away, the wind at his back, his head turned our way to keep an eye on his backtrack. Using trees for cover we inched closer but ran out of stalking room about 300 yards away.

I didn’t have a good shooting lane and had to figure out a way to get in a better position. The deep snow that we had been fighting through for most of the week finally worked to our advantage. I slid on my back downhill, making a furrow that was deep enough to keep me out of sight of the bull. Every now and then I’d pop my head above the snow to take a peek at him.

When I found the best spot, I got into a kneeling position, took the cover off my scope and waited for the right shot. Ryan got the bull to turn his head with a series of cow calls and I pulled the trigger. My first shot was low, kicking up snow onto the bull. He jumped up and I worked the bolt on my Weatherby as fast as I could. My next shot connected and he was staggered. He stood broadside, so I kept shooting, hitting him four times in the neck, shoulder and chest. As quickly as he jumped up, he went down.

With both elk and moose hunting, a truism is that the fun is over once you pull the trigger. It took us many long hours to get that bull off the mountain. After we gutted him we had to skid him down off a cliff and into a clearing, where we could get him quartered and loaded onto some mules.

Ryan is only in his mid-30s, but he’s an old-school hunter. Watching him sling the meat and horns onto the backs of the mules without any game bags and using only rope is a glimpse of a dying art. The intricate knots and hitches kept the quarters secure and perfectly balanced during our trip off the mountain and back to camp.

As the mules picked their way down the ridges and through the creek bottoms and descended into the thick stands of timber below, I couldn’t imagine a more perfect sight or fitting end to the hunt.