In the last minutes of my last hour in Texas, it was do or die. I did. The buck died.... 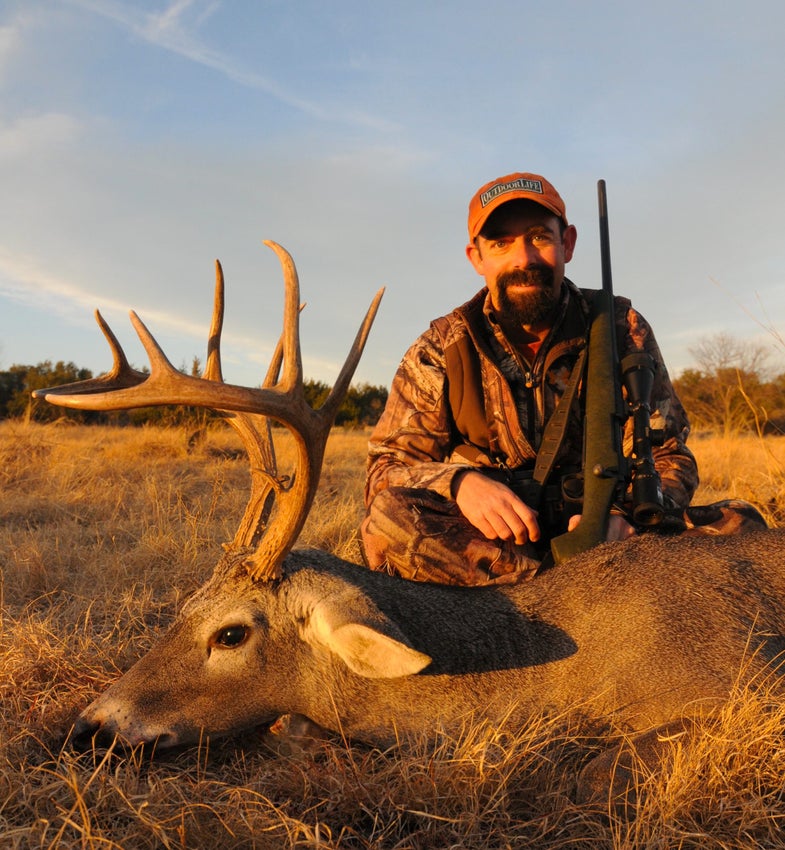 In the last minutes of my last hour in Texas, it was do or die.

I did. The buck died.

I’d like to say there was skill involved. Or even some time’s-up heroics that put this Lone Star whitetail on the ground. But instead it was the tyranny of a deadline, and while he’s a fine buck by anyone’s measure, he wasn’t exactly the sort of deer I braved bad roads, cancelled airline flights and the hacking coughs of grumpy seatmates to kill.

He’s a classic “management buck,” and I was glad to finally encounter him.

I hunted all week on Steve and Michelle Anderson’s Vatoville Outdoors ranch on the edge of the Edwards Plateau south of San Angelo, Texas. As I detailed in previous posts, the first day on stand I encountered one of those legendary Lone Star bucks, rangy and wide with good mass. But because the older, more trophy-class bucks were out of our reach, I contented myself with simply taking his picture, not his life.

Five other 8-pointers, all older bucks that fit the definition of management deer on this place, sallied around the feeder that first morning, but because I was still trying to get a handle on what I could, or couldn’t shoot (I didn’t have a guide with me, so I was left to make my own decisions), I let everything pass.

For the next three days I failed to see a mature buck that I wanted to shoot, besides a couple of grand 10- and 11-pointers that were off limits.

Meanwhile, everyone else in camp was methodically bagging deer. My buddy Tim Anderson from Mossy Oak took a classic 8-point with his rifle. Same with Pete Angle from Under Armour, one of the other hosts of this hunt, who scored with his bow. Mark Melotik from Bowhunting World took a good 8-point with his bow and writer Dave Dolbee shot a crippled 10-point with a rifle. Writer Brandon Ray shot a beautiful 9-point with a split brow tine over a water hole.

But despite seeing dozens of bucks from a stand or by rattling them in, I wasn’t content with shooting any of them. It was starting to get awkward. But curiously, I never really felt pressured. I’ve killed plenty of 120-class whitetails, and especially this year I’ve lived by the knowledge that I can’t shoot trophy-class bucks if I fill my tag with junior members of the fraternity. So I was content to pass.

Until the final morning. I was supposed to be done hunting the previous evening. My flight out of San Angelo departed at 11 a.m., which gave me a single hour to kill a last-minute deer. I headed out to the first stand I sat, where I saw that rangy 5×5 the first morning. There were rumors of a tall 11-point with a sticker. The hunters who had seen him took to calling him “Christmas Tree” for his height and distinctive branching. I was looking for this curious deer, but this final morning I had company: guide John Mayer, who made me promise that I’d shoot the first good management buck we saw.

About 10 minutes before shooting light, I watched a solid buck walk into the feeder, where he joined a dozen does and smaller bucks. He looked tall and had good points. I was all for waiting for a better buck–maybe Christmas Tree–to join the party, but time was not on my side, and so when John suggested that I might take a closer look at the buck in front of me, I judged him good enough.

And he is fine. He’s a symmetrical 5×5 with a measurable sticker on one brow tine. He’s an old buck, 5-1/2 years old, and probably at the apex of his antler growth. He made a great photo. And I made my plane.