Orange You Glad It Wasn’t A Crocodile

This week the internet is abuzz with orange alligator fever after a photo of an orange-colored Alligator taken by 74-year-old... 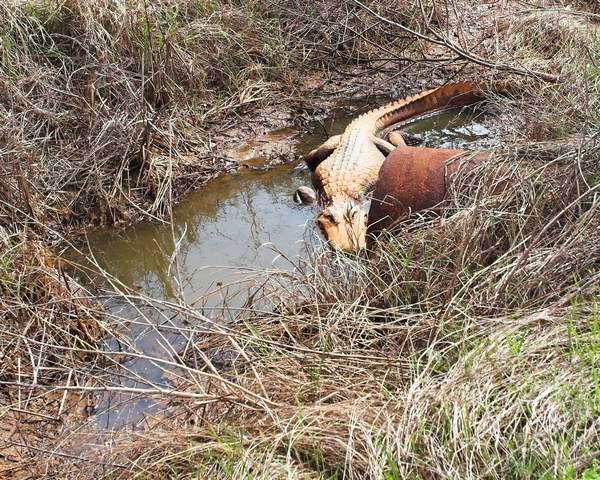 This week the internet is abuzz with orange alligator fever after a photo of an orange-colored Alligator taken by 74-year-old Venice, Florida resident Sylvia Mythen was released.

The citrus-colored reptile has drawn web surfers to theorize that the animal is painted, a mutant, a dirty albino, or tattooed. Come on people! How do you tattoo an alligator?

Some of these theories were corroborated by Florida Fish and Wildlife. Speaking for the agency, Gary Morse stated “The official opinion from our alligator experts is that this is alligator is not naturally orange. We believe it’s orange from paint, stain, iron oxide or some other element in the environment that has left a coating on the animal, making it appear orange.”

Seventy-nine year-old Texas resident Jack Bodenheimer agrees with the iron oxide theory. He says this because he took pictures of an orange colored alligator near Houston last year. After reading about the Florida orange alligator being “one of a kind” and the “first in the world” he sent photos of the Texas version to Florida’s Herald-Tribune newspaper to prove that the animal was neither.

Bodenheimer believes that the Texas gator got its orange coloring from living in a rusted out culvert. Most wildlife officials in Florida, and elsewhere, find this to be a plausible explanation.

Rusty alligators? I don’t know. I think they’re aliens. What do you think? Actually, the most shocking thing about this to me in this story is that two septuagenarians were able to use a digital camera! Comment below!