The morning of my first-ever sea duck hunt dawned clear and cold, as was expected. However, the fast and furious... 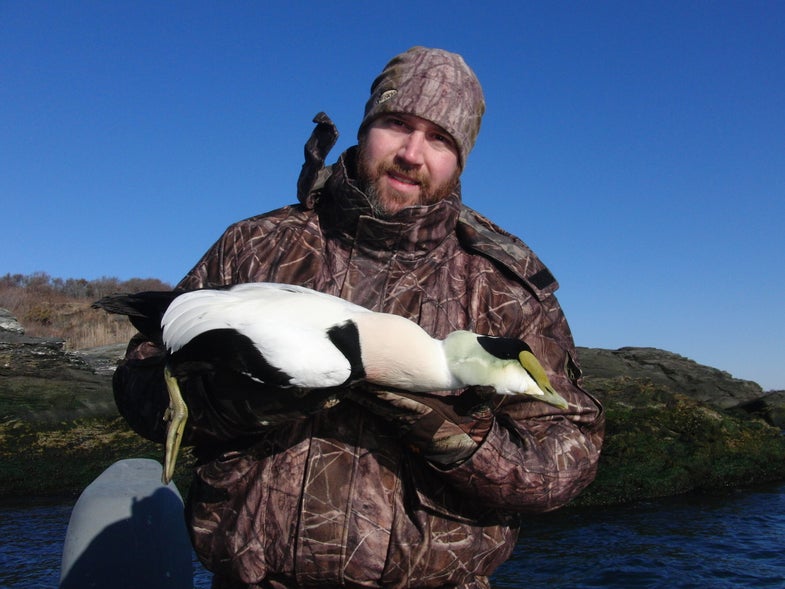 The morning of my first-ever sea duck hunt dawned clear and cold, as was expected. However, the fast and furious action that also was expected didn’t exactly come to pass.

Captain Brian Rhodes of The Swampers guide service picked me up at my hotel at 5:00 a.m. and after a quick stop at Dunkin’ Donuts, where we met Brian’s fellow Avery pro-staffers Mike Bard from Central New York and Bryn Witmire from Pennsylvania, we shot down to the launch in Jamestown. We put Brian’s TDB duck boat in the frigid saltwater and motored out to a rocky point where we set out two strings of a dozen decoys each and a semi-custom eider Mojo decoy Brian’s brother crafted from a mallard Mojo, a length of PVC pipe and an old foam buoy.

Things looked promising from the outset as several hen and drake eiders piled into our spread before legal shooting light. Mike counted down the seconds to the 6:42 start time, and within 20 seconds a drake and hen zipped into the spread. I promptly delivered a load of No. 2 shot into the drake and he crashed down into the water.

Unfortunately, my first seafowl also proved to be the last bird we shot this morning. Despite the seemingly ideal conditions the birds just didn’t cooperate. We motored to a different spot a little ways down the rocky coast, set out three dozen-decoy lines and missed a couple hen eiders, but by 9:30 the birds had all but stopped flying. So we collected our gear and headed in for breakfast.

After we stuffed ourselves with various pork products, eggs and pancakes we went to check out a tip from one of Brian’s buddies who had called to alert us of a pile of birds down at Point Judith. Indeed the birds were there, but we decided to leave them for tomorrow morning when a forecasted west-southwest wind will make them easier to hunt than the east-southeast wind we had this morning. Hopefully those birds will be more cooperative.