Grab your rifle, a pound of cat nip, and your best “here kitty kitty” call because the good folks down... 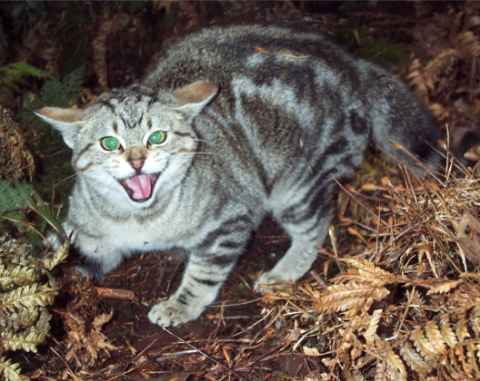 Grab your rifle, a pound of cat nip, and your best “here kitty kitty” call because the good folks down in Moorooka, Australia need some help. And fast!

According to the Australian newspaper, City South News, the town of Moorooka has been overrun with feral cats “the size of dogs.”

Residents of the town say the cats have been terrorizing them for more than a year and that citizens “have been scratched, bitten, hissed at and intimidated several times by the cat pack.” The latest cat attack was against Marlene Jans, who said of her attack, “I was crossing the road, it was dark and I couldn’t see them. Then, bam, one came at my dog, one came at me. One was biting my leg. I went for my dog because she was screaming. I had to kick them away. I was really scared and I was dripping blood.” Jans’s bite later became infected and she insists that she is scared to go out at night.

Attacks aren’t the only problem. Moorooka resident Kenneth Belsham complained, “They’ve created quite a stink, they pee everywhere and they smell.”

Moorooka city officials have announced they are investigating the best way to “have the cats rounded up.”

What do you think Outdoor Life readers? What’s the best way to deal with this cat-astrophe? Have an opinion – or does the cat have your tongue? Feel free to post more than one idea as there is more than one way to skin a cat. OK. I’m finished. That’s all the cat jokes I’ve got. So don’t be catty!