The news release reads like any other plea to the public to solve a wildlife crime: An antelope had been... 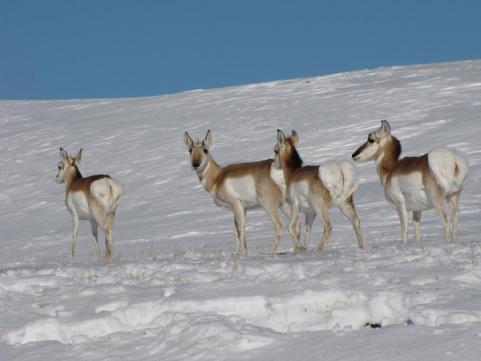 The news release reads like any other plea to the public to solve a wildlife crime: An antelope had been shot in the head and left on the side of the Montana road where it died.

It’s an egregious crime against wildlife. Unless you know the context, in which case it may not be a crime at all, but rather a mercy killing entirely justified by the circumstances.

I don’t know all the details of this incident, and until I do I must remain neutral. But the case raises a conflict that I struggle with every day on my 4-mile drive to town and back. During this killer winter–we’ve received nearly 100 inches of snow and the arctic cold hasn’t broken though we’re in March–I’ve been close to dispatching any number of emaciated, broke-down or wounded whitetails and pronghorn antelope.

Last week, I watched a whitetail that had been clipped by a vehicle struggle across a drifted field, dragging her rear end and leaving a bloody trail across the wind-packed snow.

Last month I kept my eye on an antelope that bedded near the railroad tracks. Every day it remained in the same place, and after a week I noticed that it had died in its bed and been partly covered by a fresh quilt of snow. Knowing how it ended, I should have shot that antelope and saved it a week of agony as it slowly starved.

Is that what happened with the Saco antelope? I’m betting yes. And I’m betting that the person who put a bullet through its head hated doing it almost as much as they hated feeling that they had to do it.

What would you do? Have you ever dispatched an animal because you respected it enough to risk punishment in exchange for dealing it a quick, humane death?