Get ready for the best duck season in recent memory. Dripping-wet nesting habitat has created the biggest population of ducks... 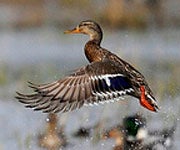 Get ready for the best duck season in recent memory.

Dripping-wet nesting habitat has created the biggest population of ducks since waterfowl biologists began their spring pond survey back in 1955. That’s big news, and proof that a rising tide lifts all boats (or at least some duck species), populations of every flavor of duck except for wigeon and scaup are up. Way up. Gadwall numbers are up 80 percent over the long-term average. Redheads are up 106 percent, and mallards are up 22 percent.

That’s the good news. But when are record-high duck numbers bad news? When you live in the very places producing all those ducklings. The central Canadian provinces and Great Plains are taking a serious drenching, with record-flooding extending from the Saskatchewan River drainage all the way down the main stem of the Missouri.

It’s interesting to see how this good-for-ducks-bad-for-folks dynamic plays out in the news releases announcing the record-high duck census.

Everyone with a stake in waterfowl was scrambling to be the first to shout the good news yesterday. I got a news release from Ducks Unlimited at 4:10 p.m. yesterday. The title in all caps: “DUCK NUMBERS REMAIN STRONG AS POND COUNTS APPROACH RECORD LEVELS.” No mention–at all–about the human cost of all that water in duck country. Of course, DU is based in Memphis.

“While water is great for ducks, excessive snowpack and heavy spring rains produced extreme flooding across much of the prairie breeding grounds,” said the release. Delta Waterfowl is based in Bismarck, North Dakota, parts of which have been evacuated due to Missouri River flooding. “From the Canadian prairies to the Dakotas and eastern Montana, tens of thousands of homeowners have been displaced by swollen rivers, millions of acres of cropland remain unplanted and hundreds of miles of roads are under water.”

That was followed at 8:24 p.m. by the official–sober as a summons–U.S. Fish & Wildlife Service press release announcing the waterfowl survey.

The spin given by each source confirms that every story has a point of view, and sometimes that perspective has a lot to do with where the narrator lives. And how wet his lawn is.

Photo by: George Gentry/U.S. Fish and Wildlife Service on Flickr