For years, wildlife biologists south of Kentucky and west of Arkansas have talked about managing populations of feral hogs. Now... 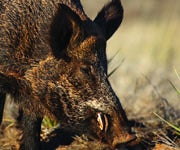 For years, wildlife biologists south of Kentucky and west of Arkansas have talked about managing populations of feral hogs. Now the discussion has turned to eradication. And strategy sessions are tinged with a pessimistic sense of desperation.

America has a hog problem. It’s been growing since 1539, when Hernando De Soto’s conquistadors brought the first swine to the continent. In the nearly 500 years since, domestic pigs have provided nourishment for settlers, while escapees offered sporting opportunities for hunters looking for alternatives to deer or birds.

The problem is that feral pigs resist management, and they raise hell with agriculture, costing some $1.5 billion nationally every year. Somewhere between 4 million and 6 million wild hogs are rooting and wallowing their way across the U.S., from Georgia to Texas and California. Opportunistic hogs have had an impact on everything from turkey populations in the Midwest to endangered sea turtles along the Atlantic coast. A decade-old study conducted in Texas suggested that nearly 25 percent of quail nests suffered hog depredation.

SWINE STOPPERS
Even professional pig exterminators say that getting a handle on our exploding hog herd will be difficult. Rod Pinkston of Georgia’s Jager Pro Hog Control Systems traps sounders during winter months and then guides night-vision hunters to survivors through the summer and fall.

It’s unlikely that conventional techniques will be able to control hogs. Here’s a look at the options:

#1 – Recreational Hunting: Even with dogs, traditional hog hunting is a losing strategy for controlling prolific, intelligent pigs that run in multi-generational groups. Taking one or two pigs does nothing but educate the remaining animals and turn them nocturnal.

#2 – Night Vision: More efficient than daytime hunting, night vision offers groups of gunners the chance to wipe out several hogs with a single volley. But gear is expensive, and many states don’t allow night-vision hunting.

#3 – Trapping: Traps can catch an entire sounder at once during the winter, when a lack of food sources concentrates hogs.

#4 – Aerial Gunning: Pinkston’s advice to states just entering the pig war is to make hog hunting illegal (removing incentives for people to trap and relocate the animals) and then hire a helicopter equipped with shooters to wipe out the population before it takes hold and spreads.