“The more, the better” is a common mantra among waterfowlers when it comes to decoy spreads. Under certain circumstances, however,... 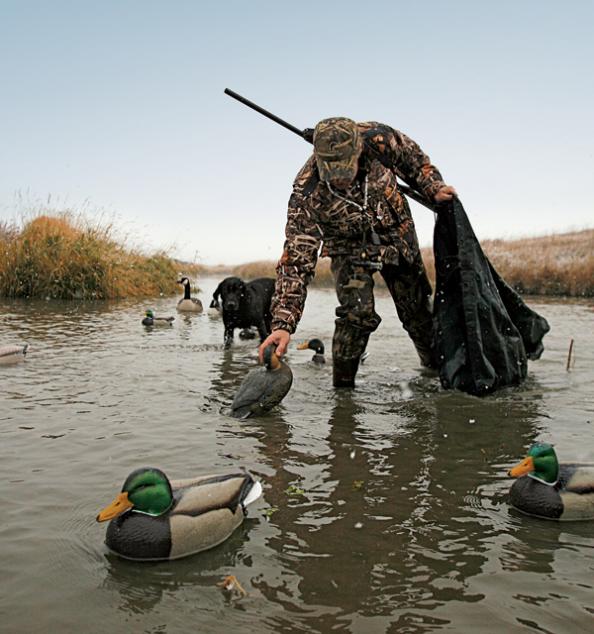 “The more, the better” is a common mantra among waterfowlers when it comes to decoy spreads. Under certain circumstances, however, you can get by with what you can carry on your back. Following are a few examples of when decoy placement is more important than how many you employ.
**
Flooded Timber**
It can be difficult for birds to spot your blocks through the treetops, so motion is more important than numbers when getting ducks’ attention in flooded timber. Add movement to your spread with a flapping-wing decoy, vibrating floater, or even by kicking the water with your feet–anything that creates ripples and gives the impression of actively feeding ducks. It’s also a good idea to offer a clear landing zone by concentrating decoys around the edges of an opening rather than in the middle. Brightly colored drakes show up better than hens.

Frozen Potholes
Though it contradicts conventional wisdom, you may be better off creating an opening in the ice near some type of cover on the downwind or crosswind side of the hole, rather than on the upwind side. Remember, it’s close-quarters shooting at a time of year when cover is sparse and birds are wary. Ducks will land into the wind and you don’t want them looking directly at you when they finally commit and lower the landing gear. Set your decoys in small groups of three to five, off to either side, leaving an opening in the middle, directly in front of you. A vibrating floater will add motion to the spread and prevent skim ice from forming.

Big Rivers
Your odds will be much better if you try to draw ducks where they’re already inclined to go. For puddle ducks on big rivers, that means out of the wind and current. Set up in shallows and eddies on the downstream side of points or islands. On shallower, slower-moving rivers, set up on the leeward side of these same features. Put out a few deepwater decoys to catch the attention of passing birds, but place most of your decoys as you would on potholes–in small bunches close to shore, leaving an opening in front for a landing zone.

Streams and Smaller Rivers
You can apply something from all of the above when hunting in smaller moving bodies of water. As on big rivers, look for pools or eddies where the emergent vegetation ducks feed on has a chance to grow. Place a few decoys in the main stream, where they’ll be more visible, and let the current create movement. Scatter the rest in small groups close to the far shore. This will force birds to land on your side. You can also employ a classic “J” hook layout to intercept birds working upstream.