If you love to hunt ducks and geese, and have been doing so for years, then you probably already know... 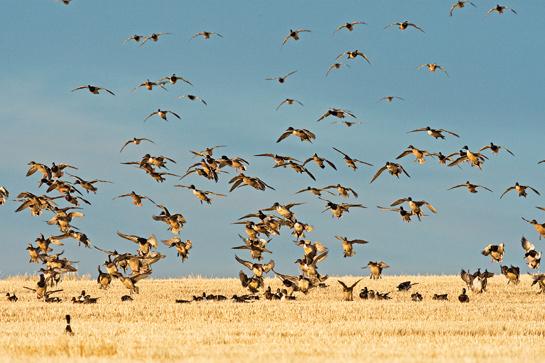 If you love to hunt ducks and geese, and have been doing so for years, then you probably already know you can’t always wait for the birds to come to you. Heck, in some years–just last fall, in many parts of the country–they won’t come to you at all. Or if they do, it’s after the season has closed. So sometimes you have to go to them.

Here are five unsung waterfowl hotspots where you can get in on some non-stop hot-barreled action until the birds finally wing their way to your home waters.

1) Western Kentucky
Down-N-Dirty Outdoors owner Mark Coin is a local, and while he isn’t about to offer up the GPS coordinates of his favorite duck holes, he admits that of all the places he’s traveled to work ducks and geese to his custom-made calls, some of the best hunting he’s found is within 30 minutes of his home.

With hundreds of miles of river and more than 200,000 acres of public hunting land, the western third of the Bluegrass State is a do-it-yourselfer’s paradise. Coin says the best part of the season is when it opens in November–if it’s not frozen out–though the best holes will take effort to access. Mallards, gadwalls, and many of the larger ducks pour through the region.

2) Southern Saskatchewan
Ducks Unlimited TV host Mike Checkett puts southern Saskatchewan squarely on his list of top-five waterfowl destinations. While the region isn’t necessarily a huge secret, the fact that it provides most U.S. hunters with a jump on their home season (the best time to hit the lower province is in late September and early October) makes it a must-visit. The area is the most important breeding area for mallards, pintails, and other large ducks in North America, and is also a key staging area for geese descending from the Arctic region. Many of DU’s wetland projects there offer great public hunting, and quality outfitters abound.

3) Southern New Jersey
New what? You heard it. While it may not compare with the best of the best along the Mississippi or Central Flyways, this being the union’s most populous state and within less than a partial day’s drive of a bulk of the nation’s population, New Jersey is one of waterfowling’s best-kept secrets. From Barnegat Bay all the way around to Delaware Bay, New Jersey’s southern shore and watery points west boast protected bays and marshes bordering agricultural land where housing developments have yet to pop up. Hunt the more open water for abundant divers or keep along the shore and go inland for dabblers and geese.

4) Northern Montana
In a state known more for its big-game hunting, northern Montana–along the Missouri and Milk rivers, and even farther west–boasts some of the most unpressured duck hunting of the Central Flyway. In fact, with hunters’ sights still set so squarely on big game and, to a lesser extent, upland birds at this time of year, I know a couple of sportsmen who make the trip out West and are still able to secure spots to hunt by knocking on doors.

5) California’s Central Valley
For phenomenal pintail action, Ducks Unlimited’s James Powell loves California’s Central Valley. It lies in the heart of the Pacific Flyway, and the rice farming in the region serves to attract and hold large flocks of wintering ducks. In fact, the region may well hold more than 60 percent of the Flyway’s total ducks and geese during the heart of winter shooting. Private duck clubs abound, but there are still some tightly managed (isn’t everything in California?) public hunting areas, as well as enough outfitters to easily accommodate a visiting shotgunner.