Gun Dog Training Tips: How to Correct Bad Behavior in the Blind 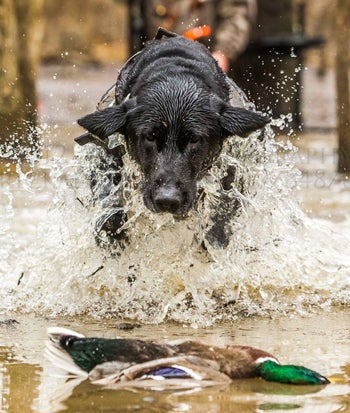 Solid waterfowl dogs don’t just happen. Obedience, mouth manners, marking, and handling take months of daily training. But in the real world, many of us didn’t do enough of that prerequisite work, and now we’re in the blind, screaming at our dogs: “Listen! Sit! Stay! Come!” And panicking that our duck hunt is a bust.

Unless you retake control of your dog now, it’s not going to be a good day, for you or your hunting partners. But if you’ve done a semblance of pre-hunt training, your dog knows what’s expected of him, and a few simple reminders in the moment can salvage your outing.

1. Issue: Breaking and pacing
Without a doubt, breaking (going for a bird without being sent) and pacing in the blind are the most common problems you’ll see. Not only will a dog’s movement in the blind cost you birds, it can be deadly if the dog breaks in the direction hunters are shooting.

Fix: A matter of obedience, sitting until being told to move is the most fundamental command a dog can learn. Practice by making the dog sit while you watch TV, do chores, or coach the kids’ soccer games–any activity that requires the dog to sit when he’d rather be doing something else. Start with a few distractions and slowly build until you can pull the shotgun out, work the safety, and eventually shoot blanks while marks are thrown. Reward behavior, and appropriately correct noncompliance.

In the Blind: Make a correction the moment your dog lifts his butt from the ground. He knows your expectation. Don’t let him get away with even a little slip.

2. Issue: Hard-mouthing
Puncture wounds and broken ribs render birds unsuitable for the table. Teaching your dog to hold a dead bird properly is a matter of repetition.

Fix: First, don’t play tug-of-war with your hunting dog or let him mouth squeaky toys. Next, start by placing your hand in his mouth and gently grasping the lower jaw. He’ll fight at first, but after a few moments he’ll relax. Verbally praise the dog and remove your hand. Then repeat it. When he willingly accepts your hand, make him hold a wooden dowel. Quietly praise proper holding and give him a light pop under the chin if he starts to drop the object. Require only moments of proper holding at first, then slowly increase the duration as the dog grasps the concept. Move from a dowel to frozen birds to, eventually, fresh-killed birds.

In the Blind: If your dog brings back a mangled bird, require him to hold it while you pop him under the chin to remind him of your soft-mouth expectations.

3. Issue: Delivery to hand
A dog that refuses to deliver a bird to you, running around with it in his mouth, is at best annoying. That playful behavior allows him to believe he’s in charge, and it contributes to hard-mouth issues and the damaging of birds.

Fix: As an extension of teaching hold (above), condition your dog to bring the held object directly to you, and more precisely, directly to your hand. After a dog can hold an object for a prolonged period of time, require him to sit with the object in his mouth, then walk away from him, and call him to you. Use a check cord to force him to come directly to you, instead of looping around or coming only part way.

In the Blind: Stop hunting immediately and require your dog to bring the downed bird to your hand. Too often, hunters let their dogs cheat the retrieve so that they can shoot another bird before the first is brought to hand, confusing the dog.

4. Issue: Retrieving in current
Even dogs that mark exceptionally well on land and still water often have trouble retrieving in a river. Moving water can lead to disoriented dogs and lots of lost birds.

Fix: Retrieving birds in current is simply a matter of experience. Start by throwing a mark straight across a stream onto the opposite shore, and then send your dog. He’ll drift with the current, and when he climbs the far bank, stop him with a whistle to make him sit and use hand signals to guide him to the mark. With repetition, he’ll soon learn to fight the current, instead of drifting with it, to stay on a tighter line. When he’s learned to hold a decent line to the opposite shore, start dropping birds into the current; first upriver of your position, so that the bird drifts to him as he swims, and then straight across, so he has to pick a line to catch up to the bird as it drifts away.

In the Blind: This is a matter of pacing yourself, shooting with restraint in order to keep your dog strong enough to fight the current and make a straight-line retrieve. Don’t be in a hurry to dump birds in the current. When you do, wait for your dog to fully retrieve one before downing another in moving water. And always watch your dog for signs of fatigue.