Hunting Tips: How to Track Deer in Open Country

Tracking animals in open terrain is difficult, but not impossible. Chances are you’ve seen an old Western movie or two... 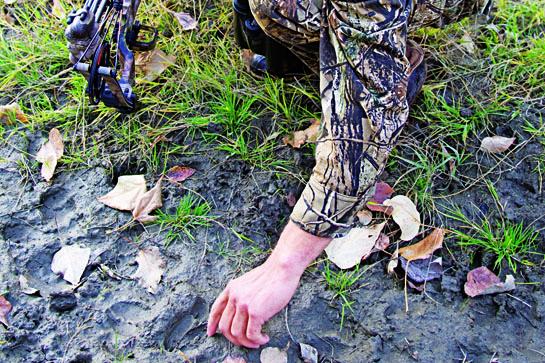 Tracking animals in open terrain is difficult, but not impossible. Chances are you’ve seen an old Western movie or two in which a Native American kneels down in the dirt and—like magic—determines the direction a horse took. Well, it’s not magic—it’s a skill. And with time and attention, it’s a skill you can learn.

Tracking on bare ground without the assistance of snow requires focus and attention to detail. Whether you need to track an animal that has been hit but is not bleeding, or you caught a glimpse of a bruiser in the distance and hope to slip up on him from behind, here is what to keep in mind.

Think Like an Animal
Tracking on open ground is as much about anticipating animal movement as it is about following sign. In most places, you won’t be able to look down and see a clear track. If you can logically connect point A to point B, then you can figure out the route that you believe the animal is taking. If the trail is obvious, such as at the bottom of a ravine, follow it as swiftly as possible and if it forks, study the fork to determine which trail was taken from there.

What to Look For
Tracks are important, but they are not the only sign to look for. Snapped limbs, a fresh bed, trampled grass, and scattered rocks can all be signs the animal passed this way.

Here’s Your Sign
To find sign, thoroughly examine the areas where you most expect it to be. You won’t find much in an open field, so examine all the trails exiting the field. Creek crossings where the ground is moist, fence crossings where animals have to leap and come down hard, dusty dirt roads or paths, and cuts between two thick areas are all places to look.

Slow but Steady
If you intend to catch a moving animal, you need to travel at a pace greater than his, or reach a point where you can get a clear shot. But you can’t just go bumbling after him. The key is to pay attention and choose the right pace at the right time. Make up time on the obvious path, but always be aware the animal could be watching his backtrail.

Wind
Don’t bother tracking with the wind at your back. You’ll never catch an animal that can smell you coming. Try to strike sign that allows you follow it into the wind. Once an animal beds, it’ll face downwind to watch its backtrail, trusting the wind from behind to alert it of danger. Have a partner watch ahead for spooking game while you focus on the trail.