Waterfowl Tips: How to Hunt Ducks and Geese in Any Weather Condition

Ghastly weather, the kind that keeps most people indoors, sounds the alarm to waterfowlers that the best days afield have... 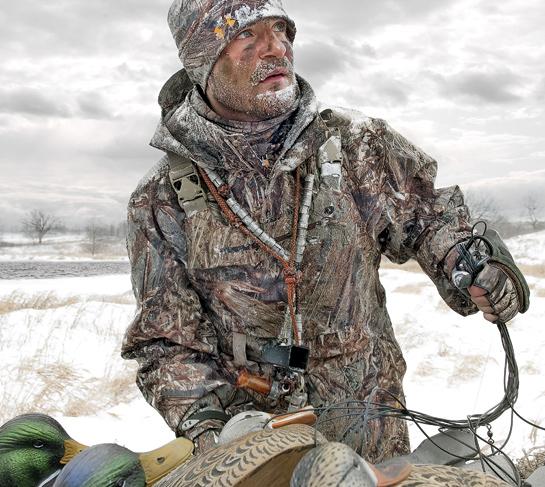 Ghastly weather, the kind that keeps most people indoors, sounds the alarm to waterfowlers that the best days afield have arrived. But if last season taught us anything, it’s that Mother Nature is a fickle mistress–the 2011-12 season featured the greatest migration that never really happened. With two back-to-back record spring hatches, however, this season could serve as a huge comeback for duck and goose hunters.

Even if the millions of ducks and geese reared across Canada for the last two years are pushed south by wave after wave of cold fronts, rarely will daily weather provide perfect hunting conditions. Too hot, too cold, too windy, too still: It’s always something. Here’s how to turn those problems into opportunities–and shoot more waterfowl.

Sunshine
Bluebird days with a harsh sun have a small upside–your decoys are more visible, catching the attention of passing birds–but many pitfalls. High-­flying waterfowl are nearly impossible to bring down from the stratosphere, and if it’s a warm day, the challenge increases.

“When it’s warm and sunny, birds are in loafing mode–they’re not forced to eat or drink,” says Levi Meeseberg, who grew up guiding for his family’s business, MarDon Resort, on Washington State’s Potholes Reservoir. “You also have few new birds. It’s mostly birds you’ve been banging at for weeks. The most important thing is calling, but calling correctly.”

On a clear, sunny day–especially if it’s calm–sound will travel farther, and tranquil waterfowl can hear and analyze every note. Meeseberg believes that too many hunters call when there’s no need. “If you already have their attention, just shut up and finish them with a little lonesome hen or a real soft hail call when they slide out on the turn,” he says.

Clouds
On the flip side of a glaring sun is the softening effect of overcast skies.

“If we’re in a Missouri timber hole, the worst condition we can have is clouds and stillness,” says McCauley, also the owner of MOmarsh, a maker of layout boats and accessories. “With sunshine, we can hide in the shadows, but when it’s cloudy, you really have to watch every move and double up on concealment. You can’t get away with as much.”

While dispersed light can reveal a timber hunter’s location, it can also make every duck hunter’s spread look lackluster.

“On sunny days, decoys shine like a diamond. But on gray, overcast days, everything is muted,” says Rusty Burnam, head of media relations for Avery Outdoors. “Try using a variety of species instead of all mallards–mix in teal, wigeon, and pintails. Shovelers make a good addition to a spread because they increase visibility in open water.”

Arctic Cold
The good news about frigid winter days is that they allow you to sleep in.
“One thing that happens when it gets super cold is that birds tend to stay on the water longer–they don’t fly right off the bat–so we won’t go out until 9 or 10 in the morning,” says South Dakota guide Ben Fujan, who also suggests waiting until the sun is up to kick ducks off an open-water hole.

“Even if it’s just 25 to 30 degrees out, you’re better off waiting because if you kick them off in the dark, you won’t be able to keep the hole open until the birds come back.”

For MarDon Resort’s Meeseberg, it’s all about finding open water and food sources. “When you get an arctic blast, the front edge is packed full of birds and you’ll get the best two days of your life. After that, you’ll be looking at ice cubes,” he says. “You’re going to lose about 90 percent of your birds after those first days, but the remaining 10 percent are going to be in about .01 percent of the water.”

High-carbohydrate food sources become critical during cold snaps. “This is when you’ll get your best field hunts for ducks,” he says. “Ducks will hit the corn all day, then go to water and turn right back around and feed again.

High Winds
Gale-force winds will wreak havoc on a hunt. Unless ducks and geese are directly downwind of your spread, calling is pretty much futile.

“If the flock is upwind or off to the side, you can blow your guts out and they’re probably not going to hear you,” says Avery Outdoors’ Burnam. “But a flag or spinning-­wing decoy can get their attention. For geese, a flag is the answer on a windy day.”

For Meeseberg, it’s all about finding protected areas. “When the wind is blowing 60 mph, feeding and everything else goes out the window. The birds just want to get down, stay down, and wait until the wind lays down,” he says. “On bigger water, the idea is to find dominant points that have the cleanest, slickest water you can get to and still be somewhat visible.”

For howling winds, adjust your spread by cutting the distance between decoys to about a foot and a half, and pile them up in the softer water along the shore and onto the bank. Tight decoys usually means nervous birds, but not with a heavy wind. They’re jamming into a very limited area, so thicken it up on the shoreline
**
Snow**
When it comes to hunting the deep white stuff, your spread is the key to a successful hunt. Place decoys closer together than you normally would to mimic wild geese, and add realism by kicking up the snow to expose dirt in front of the dekes–to birds passing overhead, it will look like the group has found a food source.

“That will give incoming geese something to look at and zero in on,” says Vaca. “Even if they don’t land, it will give you a good passing shot.”
Guide Ben Fujan suggests that you use loafer-pose shell decoys in conjunction with full bodies.