Hunters’ Perspectives on the First Hound Hunt for Wolves

Editor’s Note: The hunters in this story requested that their full names be withheld and their faces be blurred out... 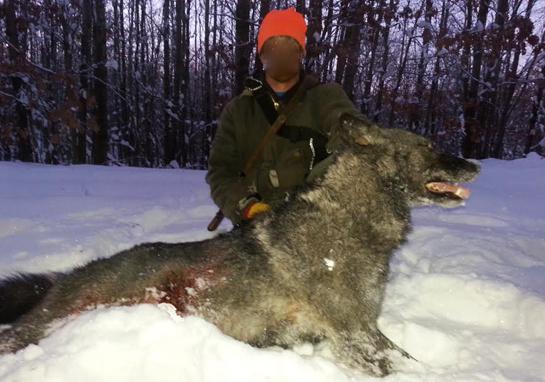 Editor’s Note: The hunters in this story requested that their full names be withheld and their faces be blurred out in the photos. This is because anti-hunting extremists regularly target wolf hunters with hate speech and death threats.

Theodore Roosevelt and General Custer did it. Now, over 100 years later, a handful of Wisconsin hunters can also claim they’ve successfully hunted wolves with dogs.

The controversial hunt — that’s still being challenged in the state’s court system — began on December 2. Prior to that date, the wolf season was open, but not with the use of hounds. The hunt ended on December 23 when Zone 3’s (northwest Wisconsin) quota of 71 wolves, of the state’s 251 total, was met. Wisconsin has an over winter population estimate of 809 to 834 wolves and is the only state to allow the use of dogs when wolf hunting.

But some interest groups, anti-hunters, and even some active hunters, compare it to dog fighting. This is an uninformed opinion. Unlike in the recent Wisconsin hunt, breeds like the wolfhounds used in Roosevelt’s day often killed the wolves themselves.

But two of the hunters in the photo above, Jay and Jake, had a successful and safe hunt with their hounds this winter. These hunters used the same trailing hounds they hunt bears with. “Our biggest concern over having a bad encounter with a wolf isn’t during the December hunting season, it’s during the bear season, especially if we get near a rendezvous site,” said Jay. Rendezvous sites are locations where wolf pups are left for long periods of time while the adults are hunting. These sites are used from mid June until early fall until the pups are strong enough to keep up with the pack.

“We’re not going to release our dogs on tracks of multiple wolves, we look for one animal. Single wolves aren’t as bold as packs of wolves will be. When we released our dogs, which are basically athletes doing what they’ve been bred to do, we expected them to bay up the wolf just like they do with the bear that doesn’t tree,” Jay continued. Baying up is a term used by hunters when an animal holds its ground as the dogs’ circle it.

“We used Walker hounds. These aren’t fighting dogs, they’re family raised pets. The smaller dogs in the 40-50 pound range were the ones that caught and bayed up the wolves,” added Jake. No more than 6 dogs can be used at one time when chasing a bear or a wolf, although these hunters used only 2 or 3.

Jay and Jake each harvested wolves’ early in the hunt, 2 of the 35 taken with the aid of dogs before the season ended.

“We found wolf tracks in the 15 to 20 inches of new snow about 10 a.m., which marked the beginning of the most physically demanding hunt I’ve ever been on. We followed them on foot without dogs until we found a buck fawn they killed, and then followed them until we jumped them up. Only then did we drop a couple dogs on one track,” Jay said.

The chase continued deep into the afternoon, covering 4 or 5 miles with only 2 or 3 dogs on the track at a time. “A couple dogs seemed to work better because the track is less confusing then. I knew there was a funnel of sorts up ahead and headed toward it. When I got close, I saw the wolf, a big black one. There was only one dog following it, but I heard the others coming. They kept their distance from each other and the wolf finally bayed up. I managed to get within 40 yards and took the shot with my .243,” said Jay. “He went right down. It was one of the most memorable hunts of my life.”

Several days later the crew was back in the same area. This time Jake, who passed up an iffy shot at the first wolf, still had a tag. “I found tracks about 7 a.m. near the same fawn’s carcass and waited for the rest of the crew. We dropped 3 dogs about at 8:30 a.m., the same ones we used earlier and they cold tracked the wolf for nearly a mile before jumping it,” said Jake.

“The dogs had some trouble with the track, but eventually sorted it out. When it crossed a road, we dropped some new dogs on the trail. I managed to get close to them once and saw the wolf crossing a small lake with the dogs not far behind it, but still didn’t have a good shot. Eventually the wolf went into some low pines and bayed up while I snuck toward him. I could make him out behind some pine boughs with the dogs about 5 yards away. Even though I was within 10 yards of him, with the heavy cover and dogs, I didn’t have the shot I wanted. Then he saw me and began running again ahead of the dogs. After another half mile or so, I managed to get in front of him and finally saw him angling toward me. When he was about 50 yards away, he gave me the shot I wanted and I dropped him with my .223. He was a magnificent animal and it’s a hunt I’ll never forget,” Jake said, adding that over the course of two hunts he saw the wolf 6 or 7 times and the dogs always kept their distance. “Respect was given by both wolf and dog.”

The courts will decide if there’s another wolf hunt like this, but Jay and Jake’s memories will last a lifetime. “We don’t hate wolves like some do. They’re an impressive animal and have a place in Wisconsin, but like other animals, need to be managed and hunting with hounds is a good way to do it.”