Each spring, hundreds of hunters converge in Jackson, Wyoming, at the end of April. Unlike on the opening days of... 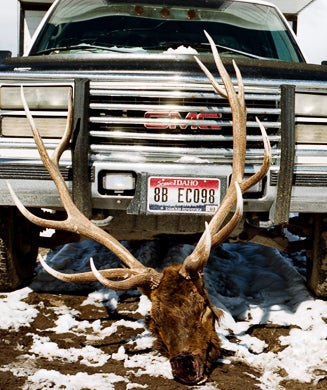 Each spring, hundreds of hunters converge in Jackson, Wyoming, at the end of April. Unlike on the opening days of most seasons, though, these hunters are not concerned with shot placement or scent control. Their eyesight and ability to run are perhaps their greatest assets. In a best-case scenario, their prey is an old carcass. These hunters are in search of elk antlers, and a lucky few will find intact skulls bearing not just antlers, but also ivory canine teeth. It’s like Christmas combined with the Daytona 500.

While the public is not allowed to pick up antlers on the National Elk Refuge, a dirt road leads hunters through it to the adjacent Bridger-Teton National Forest. In Wyoming, public land west of the Continental Divide—which includes the Bridger-Teton—opens for shed hunting every year on May 1. At 8:00 a.m. the morning before opening day, cars and trucks—some pulling fifth wheel campers or loaded horses trailers—lined up on the Refuge Road. License plates from Wyoming, Idaho, Colorado, Montana, and Utah proved the widespread attraction of the area for its shed bounty. After all, the refuge and the adjacent land serve as the winter range for more than 5,000 elk. The wintering area includes rolling hills dotted with sagebrush, riparian areas, and the more rugged terrain of the Gros Ventres Mountains, which are covered in lodgepole pine, spruce, and fir forests. It’s a shed hunter’s paradise.

Justin Armacost and Rooster Seachris traveled from Cody, Wyoming, for the Jackson shed-hunt opener. Like many hunters, they were lured, in part, by friends’ stories. “We got a buddy who used to live in Jackson and he did it for a long time,” said Armacost. “He always tells us how much fun it is and what a rodeo it is in the morning.”

For Armacost and Seachris, however, finding antlers was only part of the appeal. “I just love to get out and work the horses,” Armacost said. While camped on the Refuge Road the day before the opener, the pair spent much of their time tending to their horses—brushing them down and riding them. While most hunters head home after opening day, Armacost and Seachris mapped out plans to spend several days in the forest. “We’re just going to take in a tarp and set up a little fly and camp as we go,” said Armacost. In addition to prepping and working their horses, the two shot the breeze with other hunters. “We’ve just been goofing off,” offered Seachris. “Talking to people. Meeting people we ain’t never met. Sharing stories.” After all, once parked on the Refuge Road, hunters had nothing to kill but time.

Despite a biting wind and temperatures in the thirties, most hunters spent their time outside talking with one another. Lawn chairs, tailgates, coffee, and beer facilitated the conversations—many of which revolved around strategy. “Pick your area and just work it out,” said Armacost. “A lot of time you have to do a lot of switch-backing.” Hunters also debated the merits of the two trailheads that can be accessed via the Refuge Road: Flat Creek and Curtis Canyon. Although those who hunted from horseback favored the terrain and large trailhead at Flat Creek, most hunters agreed the areas offer equal opportunities.

Newcomers to the hunt evaluated the advice of veterans. “I heard a lot of different things,” explained James Smith of Rigby, Idaho. “People say run until you puke and then start walking—I don’t think it will be that bad.” Hunters also discussed whether they would keep their antlers or sell them. Although antlers are typically sold by the pound—for a price that can fluctuate significantly—a trophy rack might fetch several thousand dollars.

As the night progressed, so did the anticipation. “I probably won’t sleep much tonight,” said Seachris. “I’ll probably wake up at three and throw a saddle on my horse for something to do.” Yet he found other things to keep him awake through the night—like the falling snow. By morning, several inches of snow had coated in the valley. “I could feel it coming in on my face so I pulled my bedroll up over my head,” said Seachris.

Nonetheless, the horse trailer in which he camped seemed luxurious compared to the other horn hunters’ accommodations. James Smith shared the cab of a truck with three friends, including Chase Hines of Victor, Idaho. When asked how he slept, Hines was quick to reply. “Horribly,” he said. “Four people. Two blankets. I think we started the truck every hour and turned it off after fifteen minutes [to stay warm].”

When morning finally came, hunters made breakfast and saddled and warmed up their horses. Opening day of the shed hunt begins at midnight each year, but the U.S. Fish and Wildlife Service does not guide vehicles through the Refuge Road until 8:00 a.m. Increasingly, hunters enter the Bridger-Teton at midnight from the Gros Ventre Road, which runs northeast through the forest’s winter closure area. As he prepared for the day’s hunt, Chase Hines said, “The one thing that’s making me sick is there could be people in there now. That’s the game though, I guess.” En route to Flat Creek, these hunters stumble over six miles of rugged terrain, searching for sheds with nothing more than headlamps. The mileage they actually travel, however, can be even greater due to a tendency to switchback—and, for some, to lose their way.

At 8:00 a.m., an SUV from the U.S. Fish and Wildlife Service led nearly one hundred vehicles toward the national forest. While most vehicles continued to follow this pace car toward the Flat Creek trailhead, some turned off the Refuge Road to follow a second pace car to Curtis Canyon. Once at these trailheads, cars and trucks slammed to a stop. Passengers and drivers—many who had been traveling with their backpacks already on—dashed from their vehicles. Others unloaded their horses, jumped in the saddle, and rode off.

As these hunters headed toward the forest, the hunters who opted for the night hunt from Gros Ventre Road were emerging from the forest. Some bore packs loaded with antlers while others had lashed the bone to their saddles. Kurt Carbone of Jackson carried a bull elk head. “I had to cut it off—just used a little handsaw and cut through everything with that,” he explained. Like Carbone, many hunters arrived at Flat Creek in time to watch the morning arrivals take off running. The night-shift hunters then waited for rides back to town or to the vehicles they had left on the other side of the Gros Ventres. A few even called taxis.

Nick Lufkin of Jackson also hiked through the night. “We started at midnight and hiked up and over [the Gros Ventre Mountains] and ran into a blizzard, basically,” he said. “We had our heads down for a lot of it and ended up finding a cave about halfway between here and [where we started]. We hunkered down and built a fire and kind of waited out the storm until 5:00 this morning, and commenced horn hunting from there.” Lufkin and his friends found several sheds and a winter kill, from which they harvested a head with an non-typical rack. While hiking through the evening, Devin Wood of Idaho Falls, Idaho, found four antlers. “It was interesting. It was tough to find the antlers in the snow,” he said. “You had to pretty much step right on them.”

Despite the number of people who had searched through the night, hunters who began in the morning were still able to find sheds. Austyn Hines of Rigby, Idaho, watched his friends and his brother Chase run past two six-point sheds. “Boot tracks don’t discourage me,” he explained. “People get discouraged by boot tracks, but hunters can walk past antlers and not even see them.”

After all, the hunt for sheds rewards patience. May 1st was simply the opening day of the season—and a snowy one at that. As Wood explained, “Once the snow melts, those who are out will find them.”

And whether they were loaded down with sheds or left empty-handed on opening day, many hunters already had plans to return in the days, and years, ahead.