The hunting archery industry has had to face tremendous change recently, as consumers have become better educated, more selective, and... 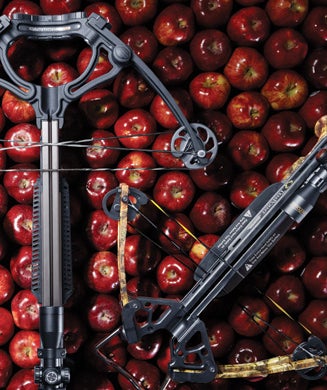 The hunting archery industry has had to face tremendous change recently, as consumers have become better educated, more selective, and less impulsive when it comes to buying bows. A simple color, camouflage, or name change will no longer cut it.

Reacting to this new reality, manufacturers have refined their designs and concentrated on improving mechanical efficiencies in an effort to motivate an educated buyer to drop his money on a new bow.

The evolution in industrial technology has trickled down, too, accelerating design improvements. The latest Computer Aided Design (CAD) programs put powerful design tools in the hands of creative engineers. Consumer sophistication continues to evolve as well, as new products are dissected and debated ad nauseam in internet chat rooms and in the public forum down at the pro shop.

With that in mind, here’s what we uncovered in our annual test of the newest hunting crossbows (see how we test here).

While still not accepted by a contingent of archers as a valid implement for bow seasons, crossbows have been welcomed by many state wildlife agencies. These agencies realize they are a revitalization and recruitment tool that can help preserve the future of hunting.

Relative newcomer CAMX builds the Chaos 325 in the U.S. and offers it factory-direct to consumers. The Chaos has an innovative batwing-­design handguard that flips into position when the bow is cocked. The Chaos, with its two energy wheels, will appeal to hunters who favor cam-based crossbows, even if its design is a bit simplistic.

For rifle hunters crossing over to the crossbow arena, the Darton Viper SS Extreme might pique interest. The finger-forward safety and stock styling are a close match to that of a rifle, making it a great transitional option for gun converts. This serpent spits arrows at 360 fps, a number sure to appeal to speed geeks.

The knock on traditionally designed recurve crossbows is that they’re sluggish. The Excalibur Matrix 380, however, is a breakout recurve, approaching the 360 fps mark with its 260-pound limbs. Simplicity rules the Matrix’s design, leaving little to break or malfunction–a plus when you’re hunting many miles from the nearest bow shop.

Reverse-draw crossbows are the future of the industry, as the advantages of the design far outweigh any disadvantages. With their long power strokes, these bows have superior arrow-speed-to-draw-weight ratios over traditional limb-forward bows. They also have superior balance, as the center of gravity is moved rearward toward the shooter. Horton continues down the reverse-draw path with the Havoc 150. However, at 334 fps, 96 dBA, and an AD/40 of 13.7 inches, the Havoc lacked inspiration.

For those who demand the highest quality in their hunting equipment, TenPoint remains the undisputed king of superior construction. Its Stealth SS is a beautiful machine that earned great marks across the board.

For those who hunt on the move with a crossbow, the 7.78-pound Mission MXB-360 may be your bow. It delivered 362 fps, an AD/40 of 11.7 inches, and ultra-low vibration–a mere 29.21 m/s2 (the lowest in the field). However, its overall score was downgraded due to composite components and a stirrup-free cocking configuration that left the panel somewhat cold.

Bows by the Numbers

All the scores, empirical data, and pricing info at a glance.

The Ghost 410 is the first crossbow or compound in the history of the Outdoor Life Bow Test to win both the Editor’s Choice and the Great Buy award in its category.

The “410” in the moniker represents this bow’s potential top speed. However, we consistently clocked the Ghost at about 417 fps (with a 416-grain arrow). That incredible speed is throttled through a 15.5-inch power stroke, and an even longer chassis is built under it (37 inches overall). An innovative all-carbon riser lightens what would otherwise be an unmanageable bow, and the adoption of a CNC-machined aluminum arrow track also reduces forward weight, keeping the Ghost’s center of gravity near the centerline. At a shade under 9 pounds, it isn’t light, but it handles and swings ably.

The composite stock has a removable plate for the addition of an optional crank-cocking device. The metal-injection-molded, CNC-­machined trigger features a delightful sweep and little creep.

The Ghost produced a whopping 150 foot-pounds of kinetic energy at 20 yards (KE/20) and a minimal arrow drop at 40 yards (AD/40) of 8.7 inches. A ridiculously quick time-of-flight of 144.24 milliseconds (at 20 yards) means an animal will hardly have time to blink as the arrow speeds its way.

While the Ghost 410 is far from inexpensive, it represents a tremendous value given its dominance of this field and innovative design features. It is very deserving of both of our awards.