Photo by Zuma Press/Alamy Only one North American waterfowl flyway is named after a river. The mighty Mississippi dominates the... 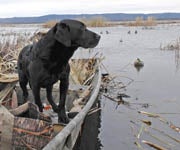 Only one North American waterfowl flyway is named after a river. The mighty Mississippi dominates the central U.S. from North to South, and funnels almost half of our continent’s ducks through that single corridor. The flyway’s southern end gets the most attention from waterfowlers. But far to the north, where ducks stage from prairie, northwoods, and arctic breeding grounds during their autumn passage, is a publicly owned sprawl of duck-hunting opportunity: The Upper Mississippi National Wildlife Refuge.

With more than 240,000 acres flanking 261 river miles from Rock Island, Ill., and Davenport, Ia., to where Wisconsin’s Chippewa River flows into the Mississippi near Wabasha, Minn., this area is a duck-hunter’s paradise. You’ll find an average of more than 900 prime public duck-hunting acres per river mile.

What and When to Hunt

In early October, resident wood ducks and mallards dominate bags, along with the last of the bluewing teal. By mid-October, greenwing teal arrive, along with splendidly colored wood duck migrants.

Late October into early November sees the zenith of Upper Mississippi waterfowl hunting. Diving ducks move in now–ring-necked ducks first, followed closely by canvasbacks. In the first and often second week of November, more than 50 percent of North America’s canvasback population might raft up in pools 4, 5, and 6 in the refuge’s upriver reaches. If you’ve always wanted to shoot a big bull canvasback in full color, this is the place. From here, the canvasbacks head cross-country toward the southern Great Lakes and then Chesapeake Bay.

Bluebills are another late-season favorite. And when ice finally locks in the backwaters, goldeneyes and buffleheads out on the big water occupy hunters’ attention, along with big green-headed, red-footed northern mallards.

Click on the Maps tab on the refuge’s website (fws.gov/refuge/upper_mississippi_river/) to find the ample public-land holdings and boat launches, plus additional wildlife areas and hunting opportunities. Contact any of the states’ game departments (dnr.wi.gov, dnr.state.mn.us, dnr.illinois.gov, iowadnr.gov) to find the best areas to target. Basically, once you launch your boat and are afloat, you’re good to go.

Hunt backwater marshes for woodies, mallards, and other puddlers. In high-water years, you can even hunt flooded timber. Diver hunters work points jutting into big-water bays. Bring plenty of decoys and use them all–river ducks like company, and plenty of it. Fifty or 60 diver decoys (showing plenty of white) is not too many. Never give up early–ducks trade all day here–but don’t be afraid to move your setup if birds are flying elsewhere.

The Upper Mississippi is for serious duck hunters. Trailer a comfortable boat (with a reliable outboard) that can handle some big water. Rig a blind to your boat and hunt right from your watercraft. Bring a river chart or topo map, and also use your GPS to mark departure areas and record waypoints as you travel. You’re heading into a wild maze of channels, side channels, bays, ponds, sloughs, potholes, and marshes. Pack emergency provisions in case you have to spend the night. Bottom line: Respect the river and watch the weather.

Most river towns provide plenty of lodging options. After a hard day on the river, a hot shower, a good meal, and a warm bed are essential. You’ll feel comfortable among the friendly local folks who will also be in camouflage and likewise in love with the Old Man flowing–and the ducks flying–just beyond the window.