Dove Hunting Tips: The Dos and Don’ts for Opening Day of Dove Season

Every new beginning has a celebration. We drop the ball on Jan. 1, toast a newlywed couple, host a housewarming... 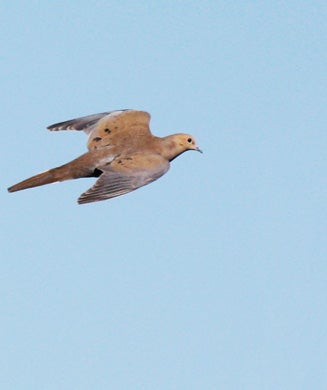 Every new beginning has a celebration. We drop the ball on Jan. 1, toast a newlywed couple, host a housewarming party and burn through a couple cases of shells in the dove field at the start of every hunting season. At least, that’s how I prefer to celebrate fall’s arrival.

Unfortunately, the start of dove season often doubles as the time when you realize just how sour your wing-shooting form has turned since last season ended.

So to help you ring in the new hunting season with falling feathers instead of just scorching barrels, I assembled a list of The Successful Dove Hunter’s Do’s and Don’ts.

1) Do get off the stool to shoot

](http://www.976-hunt.com/2009/08/where-to-go-dove-hunting-seminar-set-for-aug-29-at-bass-pro-shops/)I’ve watched hunters shoot doves without leaving their seats, but if it’s a limit you’re after, you’re better off standing to shoot or not sitting in the first place. Standing encourages better balance and footwork.

Keep your weight slightly on your front foot, or at least 50/50. And when faced with a tough angle on a bird, reposition your feet so you can swing smoothly. Feet too far closed force you to roll your shoulders. Feet too far open cause you to come out of the gun. The extra split second needed to stand and reposition your feet only equates to a yard or two more that the dove will travel before you take the shot. Better form will allow you to make the slightly longer shot.

Crossing targets are the hardest to make in the field, and probably 95 percent are missed behind. Don’t worry about how far you shoot behind when you miss, and don’t worry about how much lead is needed. The key is to always be in front – mount the gun out in front and stay there. The best instructors teach that it’s impossible to “measure the lead” without looking at the barrel, so don’t even try. Just have enough barrel awareness to know that the gun is in front of the bird, but focus hard enough on the dove to see its beak or eye. When you’re focused that hard and the gun is out front, you’ll cut feathers more times than not. Here’s a great rule to keep in mind: Always miss in front, and you’ll never be behind.

3) Do practice your gun mount

Here’s a simple practice regiment for the weeks leading up to dove season that won’t take much time, money or effort – but it will create results: On weeknights, spend 10 minutes practicing the flashlight drill. To do it, stand in the largest room in your house. Insert a small adjustable-beam flashlight into the muzzle of your UNLOADED shotgun. Set up as if you were going to shoot a target located in the corner where two walls come together with the ceiling. Now, direct the flashlight at the seam between wall and ceiling about 15 feet to one side or the other. Slowly mount the gun while tracing this seam back to the corner. Do not mount first, then swing. The stock should touch your cheek when the light reaches the corner. If your mount is smooth and your hands move in unison, you should be able to trace the seam easily. This is the same motion you need to master for the field. Do this every night, then go to a local shooting range on the weekends and practice shooting targets while starting with a low gun.

4) Do let birds in close

Get close, and don’t spook ’em – those are the best ways to make your shots in the field easier. Scout fields ahead of time to find any terrain features that will funnel birds. Set up within 30 yards if possible. Put your stool in the shade of a treeline, or if you can’t set up in the shade, build a blind. Camo face paint and covers can be a big help too, but it’s more important to keep your head down and sit still until birds are in range.

There are two keys to consistently hitting high incomers. First, you should practice the swing-through method. Mount behind the bird, pass its butt, belly and beak, then pull the trigger right when the barrel blocks your line of sight without stopping the gun. The second key is to shoot the bird out in front. Don’t let it get above you. A target directly overhead requires more perceived lead than one out in front. It also appears to be moving much faster. It’s more difficult to achieve hard focus on a target that appears fast. When you can make incomers land at your feet, you’re doing it right. Just try to be smooth and fast, because if the bird sees you early, it will flare.

Professional shooter and instructor Anthony Matarese says that if a target is flying at 30 mph, your gun should be moving no faster than 31 mph. Specific speeds aside, the important lesson is that gun speed and bird speed should be the same for crossing targets. Equate it to merging into traffic. If you’re traveling the same speed as the other cars, you can merge easily in front of an oncoming car. But if you’re traveling faster or slower, your “window” to merge is smaller.

In the field, this means avoid ripping past a bird to “catch up,” or slowing down to try and measure lead. Simply match the speed, be in front, and boom!