The southward migration of blue­wing, greenwing, and cinnamon teal marks the beginning of waterfowl season in most states. But teal... 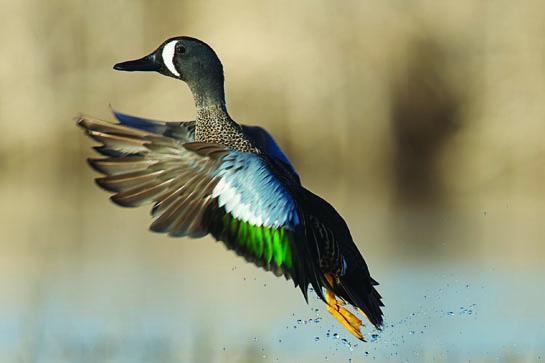 The southward migration of blue­wing, greenwing, and cinnamon teal marks the beginning of waterfowl season in most states. But teal are different from other ducks, and hunters need to employ different techniques to be successful. Kelly Haydel of Haydel Game Calls offers this advice for the early birds.

Reconnaissance
Scouting is important in any type of hunting, but it is particularly important for teal because they are creatures of habit.

“Teal will stay on the same local flight pattern,” Haydel says. “That means they’ll usually show up in the same areas at the same time day after day.”

Search for the birds a week before the season begins in areas where there are large bodies of shallow water and food sources.

The Finer Points of Fakery
According to Haydel, spinning-wing decoys are a big help when hunting teal, and the action is enough to sell even the wariest birds on your spread. If you don’t have a spinning teal decoy, don’t worry, Haydel says. Spinning dove decoys work as well.

Some hunters like to set out several dozen decoys. According to Haydel, a couple dozen is plenty, and mallard hen fakes will draw teal early in the season. Whatever you do, keep the dekes dead ahead of your blind.

“Some hunters want to place their decoys off to the side,” says Haydel. “Teal will drop down almost on top of your decoys, so keep everything straight ahead of the hunters so everyone gets a shot.”

Hide Right
“Teal are typically moving so fast that you don’t have to go all out with a blind,” Haydel says. “Cut willow limbs and stick them down in the ground to break up your outline.”

Blinds made of natural materials are less likely to spook ducks, and they’re easy to set up and break down. Figure out where the teal are feeding and get there early enough to set out your decoys and build a quick blind. It’s also a good idea to look over the vegetation as you are scouting and to develop some idea of how you’ll construct your blind. Be sure to bring along a bucket or stool to sit on as well.

Call for All
Some duck hunters believe that you need to use species-specific calls. Haydel disagrees.

“All hens quack in some fashion,” he says. “A bluewing teal hen call will work on all teal.”

Haydel begins with a greeting call as the birds are circling the decoys. If the teal begin to drift, Haydel gets on the call. Once the birds commit, be ready. They’ll probably drop right down into the decoys.

“It’s like with a dog,” Haydel says. “When it starts to get away, you tug on the leash to bring it back. But when it’s close by, you leave it alone. If ducks start to stray, pull the leash.”

Haydel advises calling aggressively. He prefers to use his BB10 bluewing teal call because it is a reed call and therefore he can be loud when he needs to be.

Size Matters
Stay away from large shot, Haydel says. He prefers No. 4 or 6 shot, and advises hunters against using No. 2 shot.

“Teal are such fine eating, I hate to turn them into mincemeat,” he says.

Most teal hunters also use too much choke. Haydel uses his company’s DPX Decoy tube, which has a constriction between improved cylinder and skeet. Teal don’t take a lot of killing, and the birds are likely to be close and moving quickly. Preseason trips to the skeet range will improve your shooting.