Mule Deer Hunting: How to Tag a Suburb Buck

When bowhunters think about bagging a big mule deer buck, they think about packing deep into the backcountry, sleeping in... 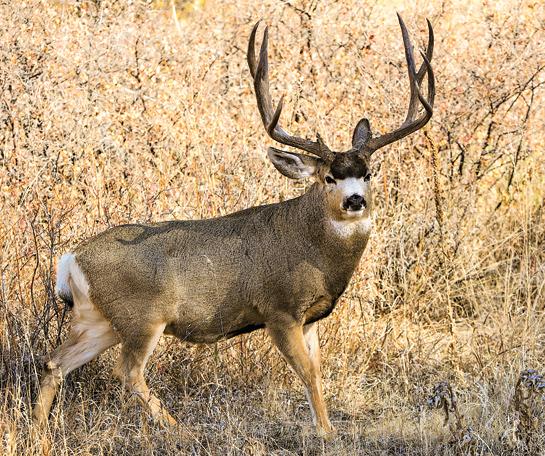 When bowhunters think about bagging a big mule deer buck, they think about packing deep into the backcountry, sleeping in a tent, and hunting hard for days on end. But Colorado hunter Matt Guedes takes a different approach. He hunts big muleys on the outskirts of small Western towns. He hunts suburban bucks.

“Like suburban whitetail bucks, mule deer have started to figure out that there is less hunting pressure around houses,” says Guedes. “As a result, bucks know they have a better chance of living to a ripe old age and growing an extra-large rack there.”

In the last five or six years, Guedes has done well finding monster mule deer bucks in the ‘burbs. In fact, he has killed several bucks measuring more than 170 inches with his bow and one that had more than 200 inches of antler on its head.

“Finding a big buck in town can be extremely difficult,” says Guedes. “A buck must have the right genetics and proper nutrition, and he must get old. It’s tough for all of that to come together–even in the city limits. I have to work very hard to find them.”

Finders, Keepers
Once you do locate a muley, however, patterning him can be easy.

“Many of the monster mule deer bucks that live in town don’t travel much,” Guedes says. “They live a large chunk of their lives in a very small area, so figuring out where they bed, where they feed, and where they spend their time is easier. Some of the deer I have patterned live on a few acres on the outskirts of town.”

The tricky part, though, is that many of the bucks that can be easily patterned during the first week or two of bow season disappear when the rut gets under way.

“I typically don’t start scouting hard until a week or two before archery season opens,” he says. “Mule deer’s patterns tend to change drastically as they go from summer to fall in late August. Then things change again after the rut gets into high gear. So I try to find a big buck and kill him the first week of the season.

“It is all about food then. Find a good food source with a good bedding area nearby. Decent bucks are often close by,” Guedes says.

Guedes suggests that hunters key on small towns that have public land near their outskirts.

“One Colorado town that hunters might want to check out is Cedaredge,” he says. “It isn’t far from Grand Junction and is surrounded by BLM and National Forest land. Many of the bucks travel back and forth between the public and private land. Those are the bucks I try to pattern.

“I get access to hunting ground by asking,” Guedes adds. “Many people with 30 or 40 acres aren’t averse to hunting and are open to having someone on their property,” Guedes says. This tactic will work for anyone who wants to chase big bucks, even if they don’t have deep pockets.