Photos by Eric Mathes In southern Louisiana, the specklebelly goose is king. For the past five seasons, I’ve hunted with... 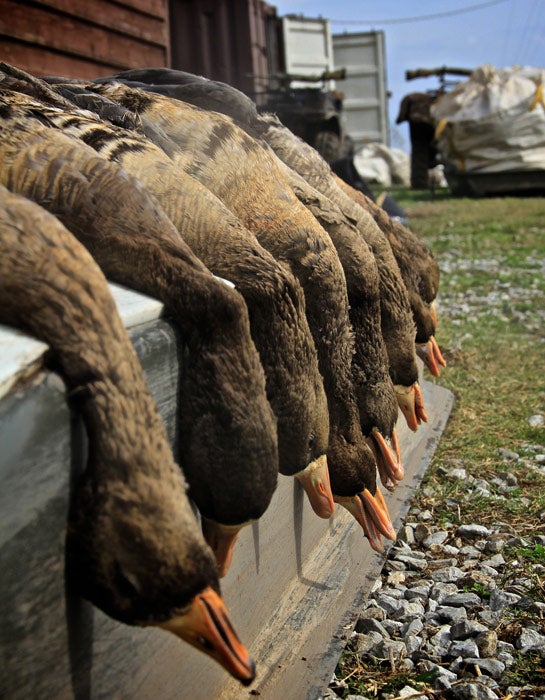 In southern Louisiana, the specklebelly goose is king. For the past five seasons, I’ve hunted with two of the best speck hunters in the state, coming to understand what it takes to harvest these birds on a consistent basis. On a rice farm not far from the delta marshes, Roland Louque and Dominic Dupre finish specks at close range all season long.

As any good hunter will tell you, scouting is the most important factor for consistently harvesting birds throughout the season. The real key in Louisiana, though, is pinpointing the habitat that specklebellies frequent.

“Up and down the flyway, specks can be found in a number of different conditions,” Dupre says. “Where our farm is located, specks prefer a plowed field with mucky conditions, so we set up our property to have several habitat areas with the soft, moist plowed ground that the birds prefer. We’ve found it helps us hold and kill more specklebellies throughout the season.”

These flooded fields represent ideal habitat, with both food and water in the same place. But you can’t kill the wary birds if you’re not well hidden.

“Without a doubt, concealment is a determining factor in success,” Dupre says. “When you find a field loaded with birds, you must find suitable cover as close to the X as possible.”

Hunting is done out of metal pit blinds buried in the levees between fields. Blinds are positioned in several tried-and-true areas of the farm, and the one that will be hunted from on a given day is chosen after the previous evening’s scouting. After determining a place to hunt, it’s time to set up, and placing decoys in the rice fields is done according to a science that these Cajuns take very seriously.

Louque is particular about his decoy spreads and has experimented with many different setups. Setting decoys upwind of the blind is important when hunting specks.

“When I’m targeting specks specifically, I usually set decoys about 50 steps upwind and never closer than 25 steps off a levee,” says Louque. “I’ll break the dekes up in little family groups pointing into the wind at various angles.”

It’s important to keep the decoys away from the levee for a more realistic setup. Louque sets his spreads upwind, getting the birds to work over the blind as they zero in on the spread. The birds, closing in on the decoys, will make their way over the blind and present a close-range shot opportunity.

With the decoys set up, Louque and Dupre pick up their goose calls. Specklebellies make unmistakable clucks and “yodeling” sounds that require practice to master. Learning cadence and when to call is something that comes from paying attention to live birds while you are in the field.

“All you’ve got to do is sit downwind of a flock on the ground and listen,” Louque says. “The birds will teach you what to do. Once you master the basic clucks and some double and triple notes, you’ve got all you need.”

Calling specks effectively is about paying attention to what they are responding to during the hunt.

“Sometimes they want to talk all the way in, so if they keep giving you a double note, you keep giving it back,” Louque says. “My favorite is to hit them on the swing with about four guys on the cluck. What you don’t want is some show caller blowing ’em out when you’ve got them on a string about 20 yards out. Something like that is usually followed by some serious blind scolding.”

Gathering the tools required for consistently killing speckle-bellies has been a long process full of trial and error for these two Louisiana diehards. Harvesting these geese can challenge even the most seasoned hunter, but as Dupre and Louque will attest, getting them dialed in can be very rewarding.