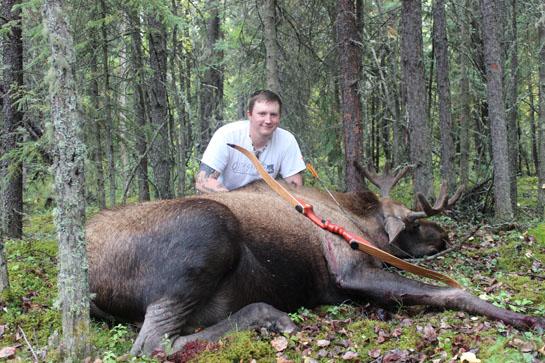 For a lot of 48’ers, September means football, return to school, and maybe dove season.

The past couple of years, I have waited until the final, rut-crazed few days of the month to hunt bulls during archery season, and although I arrowed a nice bull last year, I was disappointed that I didn’t get to do any calling before I got him. This year, my moose season is over before I even made it into the field.

I wouldn’t exactly call it hunting, but my experience ended up making for a funny story.

Moose season around Fairbanks opens up Sept. 1, and the area around town is bow-only for the entire season. On Labor Day, my wife and I were at my dad’s house for a barbecue. While we were inside eating–I was tucked into a burger from last year’s moose–I heard someone say a moose was in the yard. By the time they’d gotten the words out that it was a bull, I was running to the garage.

I didn’t have my bow along, so I quickly strung up the Bear’s Paw recurve I had bought as a gift for my dad. I dug around and found a couple of arrows with broadheads and made my way outside. I wouldn’t call myself sneaky–I was wearing jeans, a white tee shirt, and unlaced boots–but I started quartering my way towards the bull.

I saw that he was neck rubbing our 3D elk target at the edge of the lawn. My dad had seen the bull before season and even noticed that the antlerless target had been knocked over some mornings. It was clear now that the young bull was lovestruck by this foam mannequin.

I eased my way within 20 yards, softly grunting at the bull, and things nearly got even more exciting. He turned, dropped his head, and started coming towards me, apparently taking offense at my intrusion on his romantic intentions.

I backed off a bit, then making sure not to make eye contact, started working my way closer again. Having been out of town, then sheep hunting for two weeks, I hadn’t shot a bow in a month, and hadn’t shot this bow since last winter. I wanted to get as close as possible, even though the kill zone was nearly as big as a car door.

I managed to get to about 10 yards from the bull that was still trying to get a reaction from his inanimate “lady” friend, and put an arrow all the way through him, right behind the shoulder. He ran about 30 yards and went down just inside the wood line.

I was slightly bummed that my success meant I wouldn’t get to actually hunt, but I’m not one to give up a freebie freezer full of meat. It turned out to be the most convenient cleaning job I’ve ever done, and he was a perfect eating-size bull and in good shape. I will still be able to get out later this month, but I’ll be doing the boat driving and calling bulls for friends and family. Maybe I’ll take that 3D elk target along as a decoy.